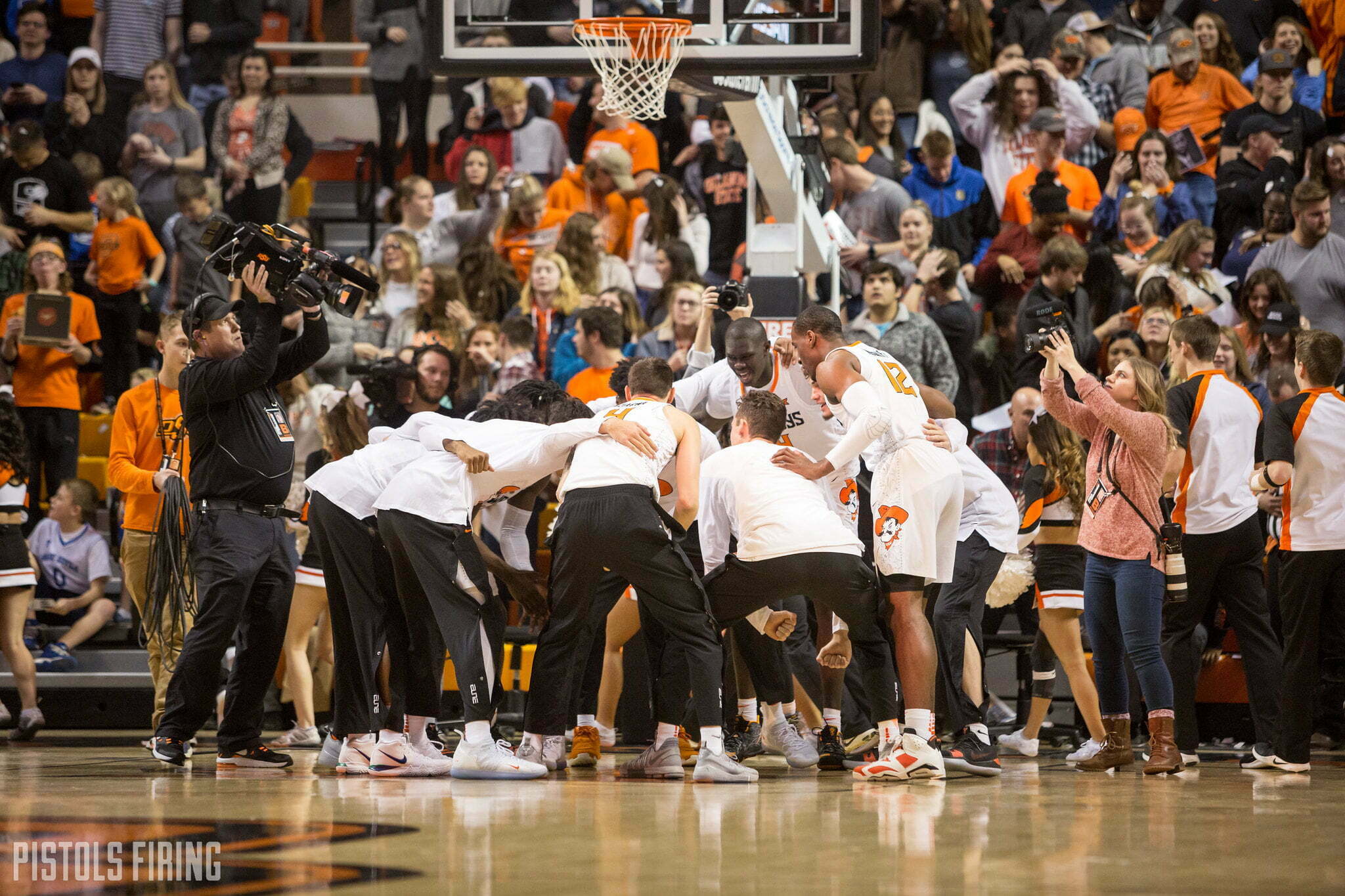 Confession time: I think Oklahoma State is going to be kind of great in basketball next year. Maybe I’ve gone full Kool-Aid Man or maybe Mike Boynton has just hacked the part of my brain I pour out on this website, but I genuinely think OSU can better than flip its record and go from 12-20 to something like 23-9 en route to a top-half finish in the Big 12.

I’ve already made the case for how Oklahoma State can follow the Texas Tech template to top-tierdom in the mighty Big 12 Conference. I know it seems like playing for the national championship on the Monday of Masters week is a long, long way away. But that path to the last Big Monday of the season might be closer than you think. Here’s the science and the art to how it could go down.

Science: Oklahoma State currently has a top 20 class, according to 247. They are adding four four-star players. Of the 14 teams in last year’s recruiting class to add at least four four- or five-star players, only four (UCLA, Indiana, Notre Dame and Texas) missed this year’s NCAA Tournament.

Three of those teams (LSU, Oregon and Maryland) came into the 2018-19 season having missed the NCAA Tournament the year before. They all used immense seasons from incoming freshmen to catapult themselves into March Madness. So there is recent precedent. There is also Oklahoma State precedent. After going 15-18 in 2011-12, Travis Ford leveraged Marcus Smart’s freshman season in 2012-13 into a 24-9 record and a No. 5-seed in the NCAA Tournament.

So much of what happens to OSU hoops over the next year depends on how good Marcus Watson, Avery Anderson, Chris Harris and the Boone twins are at college basketball. Who could have seen Zhaire Smith (No. 194 in recruiting) and Jarrett Culver (No. 312) blossoming into what they became for Tech, giving them a 2-1 finish in the Big 12 and going on to become first round picks in the NBA Draft?

OSU has four (!) recruits ranked higher than both of those guys coming into college. It’s certainly not infeasible (and maybe not even improbable) that they get all-conference play from at least one (or maybe even two) of them next season. When you pair that with what should be strong senior seasons from Lindy Waters and Cam McGriff as well as a sophomore pair in Yor Anei and Isaac Likekele potentially making the leap, it’s easy to envision OSU being 10-5 in the Big 12 with three games to go in the 2020 season. And we haven’t even discussed the two open scholarships they have to still hand out if somebody (like Harris) comes through late.

Art: As Mike Gundy might insinuate, college kids gonna college kids. Who knows what you’re getting from night to night, much less for a full season from a fivesome that’s still finishing out U.S. History (or whatever seniors take to finish out high school these days). There is so much unknown and, as Kyle Boone pointed out to me the other day, so much youth and inexperience.

This is where Boynton comes in. Do you believe he can make magic with the third-best player in Georgia, two of the top three players from Oklahoma and two of the top-15 players from Texas combined with what he already has on campus? I do.

I certainly believe in what Boynton’s doing and even more so the way he’s doing it. He’s not building to win Big 12s. He’s building to win national championships. And as Carson pointed out on our podcast on Tuesday, the more big swings you take at high-level players — one or two of whom can flip the entire thing in college hoops where only five guys play at a time — the less likely you are to fail.

There are still plenty of questions and so much of this is based on feel and luck and more or less me saying what I believe about the future (when has that ever gone wrong?). But when Harris announced and signed recently it got me thinking about how much different next year could look.

It all sounds so insane after the season we just witnessed, but this is the second-best class in the history of OSU on the basis of average player rating  (the best was in 2015 and included just three players, one of whom was Jawun Evans). The four incoming four-star players represent the same number OSU grabbed from 2014-2018 … combined. That’s no small thing, especially for somebody who in 2017-18 proved he can coach a little bit against the best coaches in this league.

So I popped into one of our Slack channels over the weekend to call my shot and pronounce OSU a top-half-of-the-Big-12 team for 2019-20 and say (I admit, irrationally so) that they were going to contend for the 2020 Big 12 title. This just six months after I said they’d finish last in the league this past season. For better or worse, I’m all in on this next season and whatever unfolds thereafter.