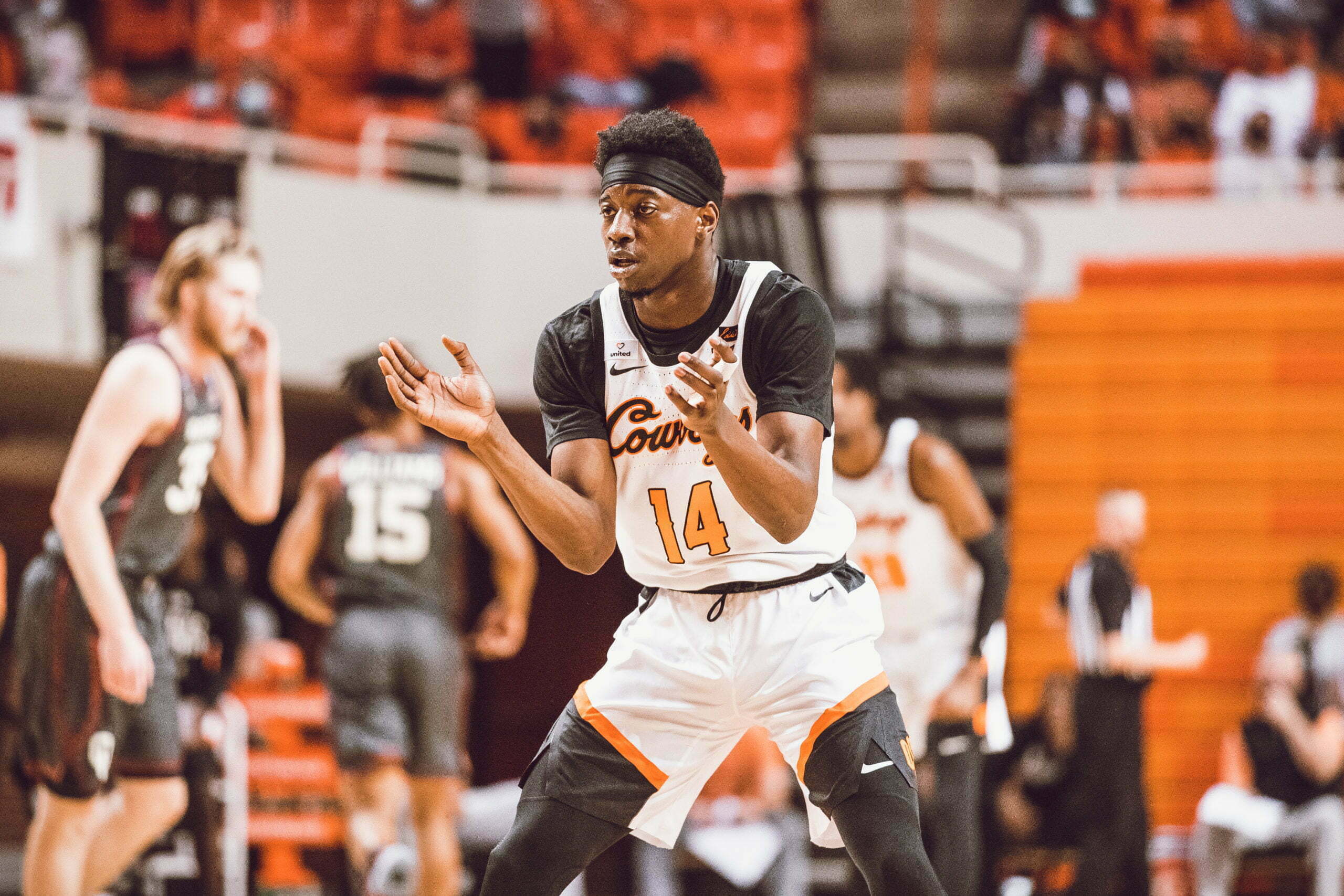 Cade Cunningham didn’t make his first bucket until over halfway through the second half. But that didn’t keep the Cowboys from completing the Bedlam regular season sweep, and it didn’t stop Cade from adding to his Bedlam lore in his final game in Stillwater.

No. 17 Oklahoma State topped No. 16 Oklahoma 79-75 in Gallagher-Iba Arena on Senior Night, completing the regular season sweep of the Sooners for the first time since 2016-17. Mike Boynton joins his predecessor Brad Underwood, Eddie Sutton (three times), Paul Hansen and Henry Iba (eight times) as the only OSU head coaches to do so.

These two teams just toughed it out for 45 minutes two days ago and, at times, it showed. Each team struggled through offensive droughts and looked disjointed for stretches, but both the Cowboys’ and Sooners’ best players hit their strides late.

Cade Cunningham followed up his 40-point outing in Norman with an 0-for-2, two-point first half as Lon Kruger and Co. was intent on denying the Bedlam hero the ball. Cunningham was double-teamed, 30 feet from the hoop, before his teammates even thought about passing him the ball.

OU’s Austin Reaves, the Big 12’s No. 2 scorer, started 1-for-6 and looked flustered throughout, even drawing a flop warning (much to GIA’s delight) before putting things together late. But he finished with 19 points on 5-of-14 shooting, seven rebounds and four assists.

Both teams leaned on their “others” throughout.

Brady Manek combined for just 14 points over his last three games for the Sooners, but seemed to get going toward the end of Saturday’s game in Norman and that carried over into the start on Monday night. He made his first four attempts and scored 11 of the Sooners’ first 23 points. Manek finished with 20 on 14 shots and grabbed nine rebounds.

Kalib Boone followed up his six-point, 2-of-6 trip to Norman with an almost perfect night. He scored 17 points and recorded nine boards and a block. He shot 8-of-9 from the field.

Williams finished with 14 points and made 3-of-6 3-pointers all while taking up real estate inside the head of Oklahoma’s best scorer, Reaves. Williams took part in Senior Night activities but stated that he was still weighing his options when it comes to the NCAA’s offered extra year of eligibility. The Loyal and True made their feelings known following the win.

Cunningham didn’t take his third shot from the field until the 14:26 mark in the second half and didn’t make his first shot until there were just seven minutes remaining.

But then he made another, racing back on a runout to pull the Cowboy within one. Then on the very next play Cade led the fastbreak which led to a wide-open 3-pointer for Bryce Williams pushing the Cowboys up 66-64 with six and half minutes left.

Oklahoma had a chance to tie or take the lead with less than a minute left, but another Austin Reaves coughed it up. Reaves tried a fancy ball fake, lost it and then fouled Kalib Boone on the ensuing fastbreak. Boone split the free throws to give OSU a 75-72 lead with 37.7 seconds left.

On the next possession, OU screened Manek to the corner for an open 3 that clanged off the iron. Cade corralled the rebound and the Sooners had to foul. Cade hit both free throws to push the Pokes’ lead to five.

On a missed Sooner shot, Austin Reaves absorbed a foul and threw up, and made, a circus shot. His made free throw pulled the Sooners within two but Cade was fouled on the inbounds pass with six seconds left.

Cade drained his first shot from the charity stripe before Lon Kruger used his last timeout to try to ice the coldest man in the Big 12. It didn’t work. Cade put the game out of reach with six seconds on the clock. He finished with 15 points on 3-of-8 shooting, seven rebounds and four assists.

The Cowboys have a long break by this week’s standards, getting a third day off before a trip to Waco to face No. 3 Baylor. They’ll finish the regular season two days later in Morgantown against No. 6 West Virginia.