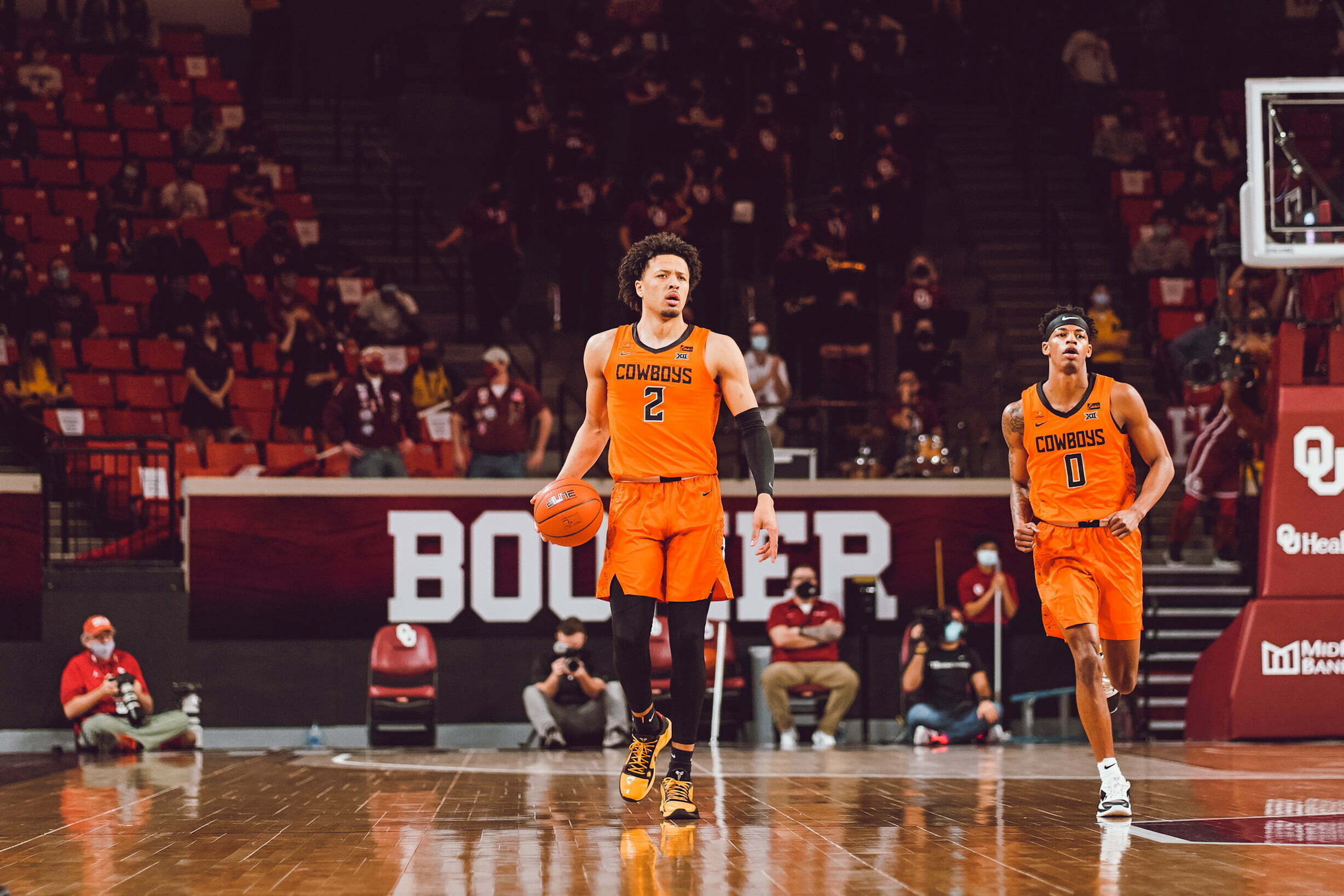 Cade Cunningham will play just one career game inside Lloyd Noble Center, and he made it count.

Oklahoma State defeated No. 7 Oklahoma in Norman, 94-90 in the Cowboys’ second consecutive overtime game. They are now 4-0 in OT games this season.

Cunningham scored a career-high 40 points on 12-of-21 shooting and hauled in 11 rebounds for his second double-double of the season. He also blocked two shots and grabbed three steals. Cade has been clutch all season, but he outdid himself on Saturday, scoring 10 points in the final five minutes of regulation and 10 more in overtime.

Oklahoma State earned more possessions, outrebounding OU 45-28, and took advantage of them, earning 18 second-chance points (doubling the Sooners’ nine). And when things got tight late, they made it count from the free-throw line, knocking down 23 of their 26 attempts.

It started out pretty enough, with the Cowboys starting 5-of-6 from the field as the Sooners started 4-of-5, but then it got downright ugly for a big stretch of the first half.

At one point, the Cowboys missed seven-straight field-goal attempts and committed seven turnovers. In fact, each team had committed just a turnover a piece over the first half nine or so minutes of the game, but then combined for 14 TOs over the next nine.

Oklahoma caught fire again, rattling off 11-straight points to go up 34-25 within two minutes of the intermission and took a 38-31 lead into the break.

The Cowboys used their own 7-0 run early in the second to whittle a 10-point deficit down to three.

Cunningham had 13 in the first half but didn’t score in the second until he knocked down a pair of free throws nearly seven minutes into the period, and he didn’t make a field goal until the 9:32 mark, when this 3 gave the Cowboys their first lead since the first half.

But as crunch time approached, Cade took the game into his own hands.

Cunningham flexed after his contested layup put the Pokes up two with 1:13 remaining and then he stared down his own bench when his next shot went in. Elijah Harkless nailed a 3 to put OU up 73-72 with 54 seconds left, but Cade answered again taking back the lead with 39 seconds to go.

Cade then blocked an Austin Reaves layup off the Sooner to give OSU the ball and the lead with 24 seconds to play. Bryce Williams missed one of two free throws allowing Brady Manek the chance to tie things up with seven seconds to go. Cunningham darted down the court, intent on ending this thing in regulation, but lost the ball and the clock expired with both teams tied at 75.

The Sooners didn’t go down without a fight, but Cade and the Cowboys stayed one step ahead. He made all eight of his free-throw attempts in the extra five minutes of hoops.

Cade may have led the way, but he had some help.

In his last two outings, Bryce Williams went 0-for-10 from the field for three total points, but he singlehandedly got the Cowboys back in it. He scored eight-straight OSU points to pull the Cowboys within one and shift the momentum midway through the second half. Williams finished with 15 (two short of his OSU high) including making four big 3s in the second half and overtime.

OU was led by De’Vion Harmon with 23 points and the Big 12’s second-leading scorer, Austin Reaves, added 22 on 7-of-18 shooting.

Round 2 of Bedlam takes place in Stillwater in just over 48 hours with an 8 p.m. Monday tipoff.