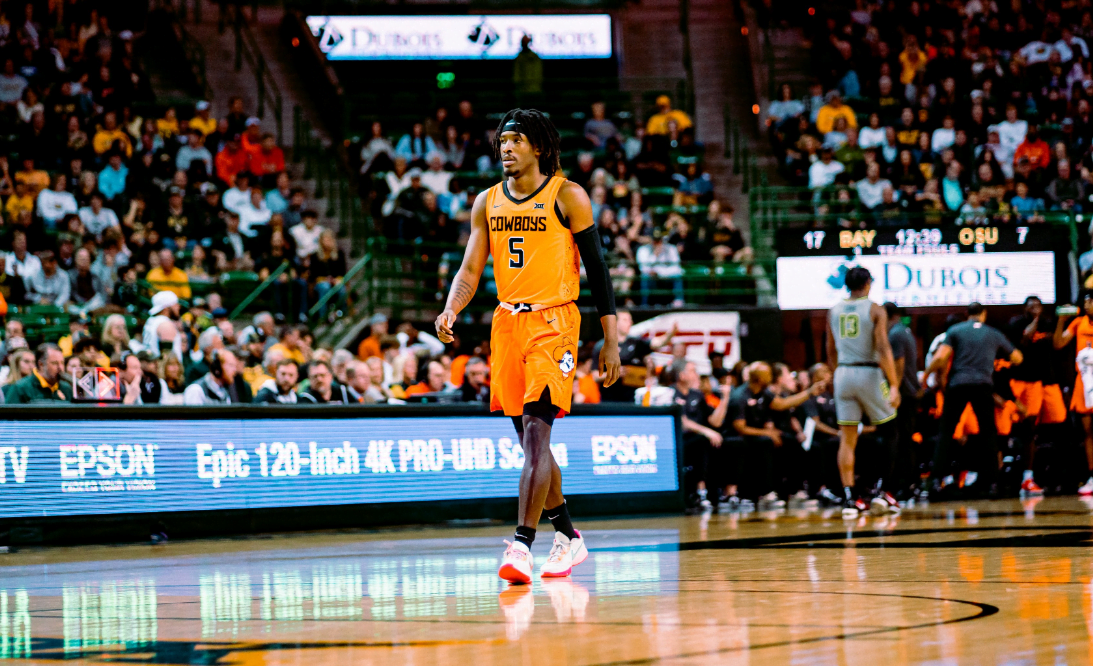 The Cowboys were able to dig themselves out of an early first-half hole, but they might have left their shovels in the locker room.

Oklahoma State lost to Baylor 74-58 in Waco, and it really wasn’t that close. The Cowboys lose their third straight game without Mosse Cisse and fall to the bottom three of the Big 12’s standings.

It couldn’t have started much worse for the Cowboys on the road. OSU missed its first five shots while Baylor was a perfect 4-for-4 from the field as the Bears built a 13-zip lead with less than four minutes gone.

But then the Cowboys’ reserves dug them out of it. The Cowboys rattled off a 13-1 run that included a 10-0 over four minutes to pull back within 17-15. Thirteen of those 15 points came from bench contributors led by Caleb Asberry’s eight points including knocking down a pair of early deep balls.

Unfortunately for OSU, Cowboys not named Caleb Asberry were not so effective from deep. The Cowboys shot just 3-of-20 from 3-point range in the first half. Meanwhile, the Bears took back control of the game with an 8-of-15 effort from behind the arc, building their lead to 16 by the half. Baylor’s LJ Cryer led all scorers with 16 and was 4-of-5 from deep.

While the Cowboys were able to dig themselves out of the early first-half hole, they must have left their shovels in the locker room.

The Bears, on the other hand, came out of the half still on fire. Baylor’s lead ballooned to 20 just over two minutes into the second and was as high as 28 midway through the period. With 11:00 on the clock, the lights in the arena went out causing a stoppage of about 20 minutes. When the lights came back on there were still some technical difficulties. At one point, the ESPN crew was calling play-by-play through a cell phone.

But even an extended stoppage in time didn’t cool off the Bears’ hot hands.

The Cowboys got shot out of the gym, finishing the night with a 3-point shooting disparity of 21 percent for Baylor’s 38 percent while tying a season-high 33 attempts from deep. You could point to the deep hole they were in, but 20 of those came in the first half, many before things were that out of hand.

This is the third game that OSU has been without Moussa Cisse, the league’s best rebounder and shot-blocker, who had become a double-double machine this year. The Cowboys’ offense can get stagnant and predictable, especially without Cisse, and they definitely aren’t the same type of defensive team with him sidelined.

A bright spot came from Asberry who led the Cowboys in scoring off the bench. He followed up his OSU-best 15 points against Kansas State with 14 more in Waco, including four made 3s.

OSU’s leading scorers Bryce Thompson and Avery Anderson had their best outings since Cisse went down. In the previous two games, the pair combined for just 15 points on 5-of-30 shooting. Against Baylor, Anderson scored 11 points on 5-of-12 shooting and dished out three assists. Thompson scored nine on 10 shots. It wasn’t quite as ugly, but it also wasn’t as much as the Cowboys needed from their two best bucket-getters.

Kalib Boone, who has excelled in Cisse’s absence, was limited due to foul trouble. He followed up a career-high 23 points — and three-straight double-digit scoring outings — with eight points (3-of-4 shooting), three rebounds and a block in just 18 minutes.

With the loss, the Cowboys fall to 9-8 and 1-4 in conference play. Next up, the Cowboys are back home for Round 1 of Bedlam on Wednesday night.