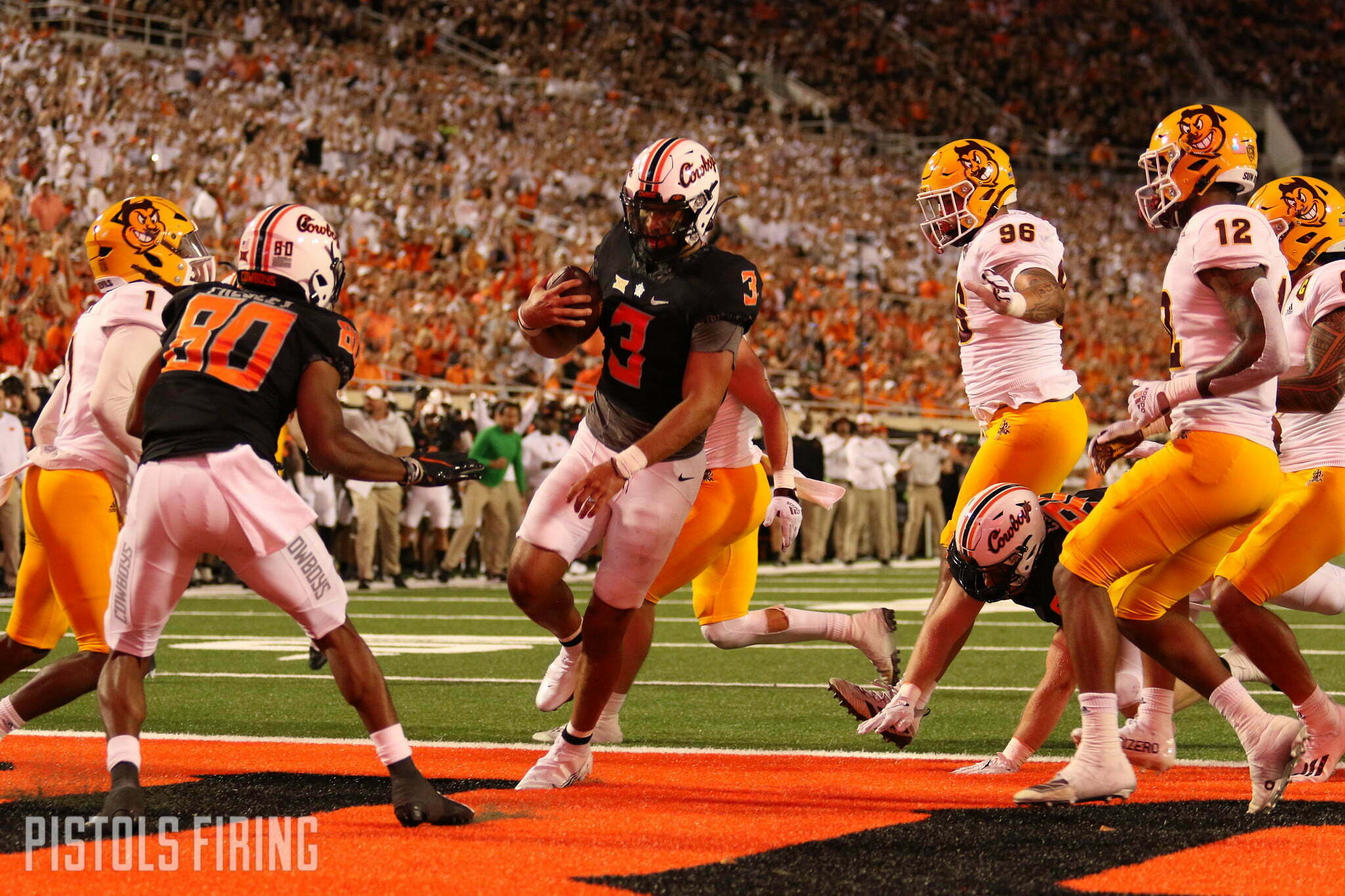 It wasn’t always pretty, but the Cowboys proved Saturday that they can win ugly.

No. 11 Oklahoma State suffered through dry spells on offense and several serious lapses on defense to defeat Arizona State 34-17 inside Boone Pickens Stadium. The Sun Devils pulled within three points on their first drive of the fourth quarter, but OSU went on to score 14 unanswered points and remains undefeated.

Oklahoma State did not get off to the offensive start it did in Week 1. The Cowboys’ first five drives resulted in four punts and an interception. They were sluggish in the run game and slow-going on first downs for most of the first half. Arizona State scored a field goal on its drive and took advantage of OSU’s young secondary with big play after big play in the first two quarters, but the Sun Devils were unable to turn any of them into points.

The Cowboys found some traction on both sides of the ball and it started with a forced fumble that OSU turned into seven points. Dominic Richardson hit a groove on that sixth drive and then found the end zone. OSU followed that up with a 96-yard touchdown drive and a field goal to take a 17-3 lead into halftime.

But the Sun Devils weren’t going away. A 73-yard catch-and-carry set up Arizona State’s first touchdown of the game on the Devils’ first drive of the second half. The next OSU drive stalled out and then both teams had trouble finishing in the end zone. ASU had a chance to tie it but had to settle for a field goal that was missed. OSU had a chance to open back up the lead after a big play to Braydon Johnson set up a third-and-goal at the 2, but a costly penalty set up a field goal which OSU made.

The Sun Devils started off their fourth quarter much like their third, with a huge chunk play followed by a touchdown to pull within 20-17. But the Cowboys answered with their own big play and a nicely executed flea-flicker at the perfect time.

Then, desperate to sustain a drive, the Cowboys leaned on Dominic Richardson and he proved to be the workhorse they needed. And when they needed a play, they went to the rookie. In back-to-back plays, true freshman Ollie Gordon picked up a tough first down, shedding multiple tacklers, before slipping free for the touchdown pass which ultimately sealed the win.

Spencer Sanders went 21-for-38 from the field for 268 yards and two touchdowns and rushed for 54 yards and another score. He did throw an interception and enough other near-picks to make the OSU faithful nervous. Sanders didn’t set any Big 12 records or garner any way-too-early Heisman tweets this week, but he showed poise down the stretch and made the plays needed to earn the win.

Richardson led the Cowboys with a season-high 131 yards and a touchdown on the turf. He also caught five of his six targets for44 yards. Ollie Gordon had just nine rushing yards but that 14-yard receiving TD.

Bryson Green led the Cowboys with 83 yards and a touchdown on five catches, followed closely by Braydon Johnson’s 81 yards on four grabs.

But there’s no question that the game ball should goes to Tyler Lacy. OSU lined him up all over their front and he wreaked havoc all over the Sun Devil’s line of scrimmage. Five tackles, a sack and 2.5 tackles for loss doesn’t even begin to quantify his effect on the game.

With the win, the Cowboys move to 2-0 on the year. Mike Gundy is now 11-3 against Pac-12 schools during his tenure, his best win rate of any non-Big 12 power conference.

Next up, Oklahoma State buttons up its nonconference slate with a visit from FCS program Arkansas-Pine Bluff.