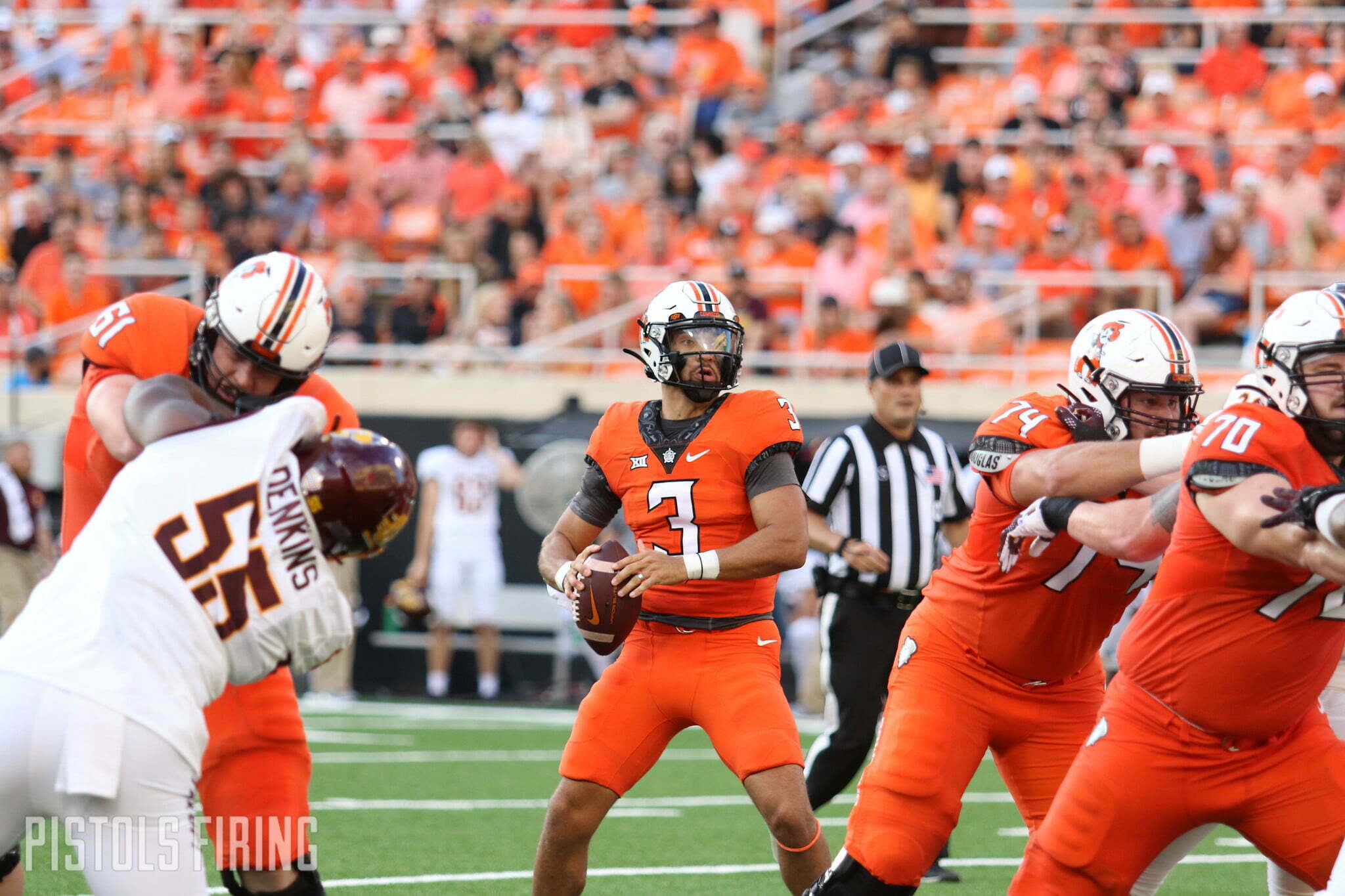 Of course, there had to be some late-game drama. It just wasn’t enough for Mike Gundy to rip off his shirt and lay down in the middle of the field this time Central Michigan was in town. Fortunately for OSU, the only national headlines to come out of this one surround its fourth-year quarterback and his huge first half.

No. 12 Oklahoma State defeated Central Michigan 58-44 thanks in large part to a historic first half from Spencer Sanders and six-straight touchdown drives by the Cowboys offense. But the Chippewas didn’t lay down and the Cowboys

Last week, Gundy joked that if the Cowboys had been awarded the win they should have against the Chippewas back in 2016, he would have already had it. But now it’s official. OSU’s winningest coach has 150 career victories. It ties Dabo Swiney at Clemson (as of writing) for the third most by an active head coach at his current school.

After the first two possessions, we had a tied football game. When the Cowboys stalled out on their second drive, that dreadful season opener from 2016 may have even been conjured up in the minds of the orange faithful. But then OSU’s special teams and defense made consecutive big-time plays and then OSU’s offense ran away with the game.

After his second series, Spencer Sanders was just 6-of-12 from the field for 94 yards and that score. Sanders missed on consecutive passes to bring up fourth-and-long and a suddenly quiet BPS crowd. Then Tom Hutton dropped a punt deep in Chippewa territory and Brennan Presley stopped it less than two yards from the end zone. Lamont Bishop and a host of fellow Cowboy defenders forced a safety on the next snap which provided the shot in the arm the Pokes needed. From that point on, No. 3 put on a clinic.

Sanders finished the game with 406 yards and four touchdowns through the air and led the Cowboys with 57 rushing yards and two more scores on the ground. He became the second player in Big 12 history tow 300 passing yards, three passing touchdowns and two rushing touchdowns in a single half, joining Texas Tech’s Pat Mahomes.

Despite being short a couple of his targets — including game-day scratch Jaden Bray — Sanders was able to spread the ball around. Braydon Johnson led the Cowboys with 133 yards and a touchdown on six catches in his return after missing 2021 with injury. Brennan Presley added five catches for 83 yards and John Paul Richardson added 73 yards and a score. Bryson Green added a touchdown before leaving with injury.

The Cowboys were pass-heavy against an experience Chippewa front, totaling just 117 rushing yards. Dominic Richardson led the Cowboys with 61 yards and a touchdown rushing on nine attempts. Jaden Ni

The Chippewas snuck in a touchdown drive with 43 seconds left in the second half, but OSU answered with its own three-play, 32-second touchdown drive to take a 44-15 lead into the half. The Cowboys’ first drive in the third mirrored most of the previous two quarters. OSU scored on just two plays in 29 seconds to take a commanding 51-15 lead, but the offense came down to earth after that and wouldn’t score again until the fourth quarter. Meanwhile, the Chips didn’t phone it in.

The lack of experience in the Cowboys’ back end, specifically at linebacker, showed up as Chippewas QB Daniel Richardson found several of his receivers for big plays and CMU running backs Lew Nicholes, last year’s FBS leading rusher, and Myles Bailey each had made plays in spurts.

In a nod to the 2016 version of OSU-CMU, an unnecessary official replay was called to officially, unofficially award Sanders with an untimed interception. On a free play due to an offsides call on the defense, a CMU defender picked off Sanders’ pass near the sideline. Initially called an incomplete pass, the booth called down (after it was said to have been nullified by the penalty) and went through the process of calling it an interception that would never see the stat sheet.

The Chippewas kept chipping away, scoring four touchdowns in the second half. CMU pulled within 58-44 with three minutes left thanks to a 54-yard touchdown pass. After a series from Gunnar Gundy, Spencer Sanders came back out to try and put the game away but the Cowboys punted, up 14 with over two minutes left. Those left in BPS held their collective breath.

OSU’s defense did hold on for the last possession, forcing a turnover on downs with 1:34 left and with zero Central Michigan timeouts remaining. OSU moves to 1-0, but the second half revealed some

Next up, the Cowboys host Arizona State Saturday, September 10 at 6:30 p.m. inside Boone Pickens Stadium.