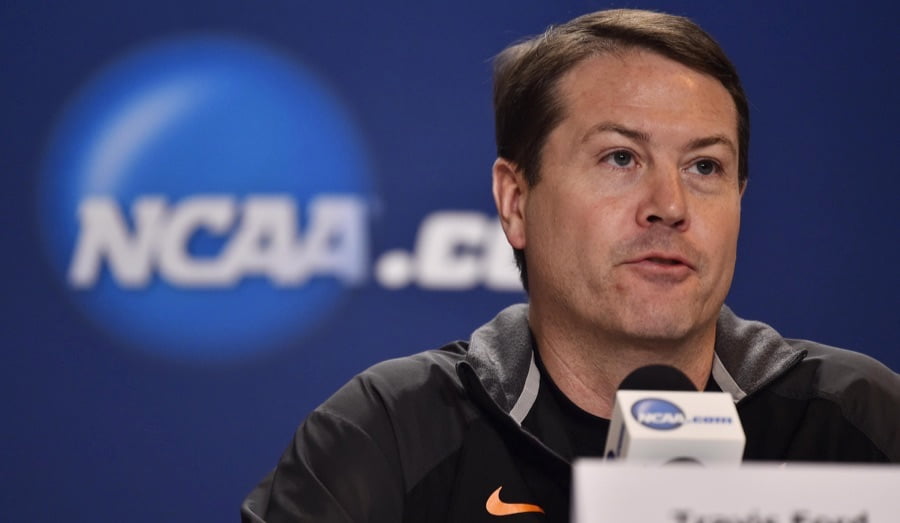 Travis Ford is probably about to get fired. (USATSI)

Well, something is happening.

First of all, congrats to John Helsley for getting the goods on what the rest of us couldn’t confirm as anything more than rumor. But oh the rumors!

Here’s Helsey in the Oklahoman:

Multiple sources have told The Oklahoman that OSU is considering a buyout of the basketball coach’s rich contract. Key word: considering.

The problem? That $9.6 million price tag.

But hey, we have a lot of fans who have made a lot of money which they are apparently willing to part with for a couple more wins a year in hoops.

Still, more than a week after the Cowboys’ season ended with a loss in an NCAA Tournament opener for the third straight year, a movement among boosters pushing for a change has Holder at least examining the possibility, according to the sources.

Outside money might be necessary to prompt Ford’s dismissal – and may, according to sources, be accumulating among donors to at least assist in a potential buyout. It is believed that OSU would remain responsible for the majority of what is owed Ford.

As Jeff Eisenberg noted, this is all but over. I agree with him. How could it not be?

Once this leaks, don't you have to do it? How can he recruit? RT @MikeSherman OSU considering buyout of Travis Ford: http://t.co/gMA5AR3YVg

The more removed I becamse from our NCAA Tournament appearance, the more I realized I needn’t even write a “this is why Travis Ford should be fired” post. Nobody thinks otherwise.

I’m surprised it’s happening, but it’s not undeserved. He hasn’t been up to snuff.[1. I do wonder what the history of coaches going to three straight dances and getting canned is. It can’t be lengthy.]

I certainly feel bad for Ford because he gave a crap and gave great effort (to steal a phrase from our football-coaching buddha). But this thing is about to go down.

I told a friend earlier today (a norman fan, mind you), the best part about all of this is that when you pay somebody a ton of cash to walk, your only next move is a walk-off bomb (Bill Self, John Wooden et al.) OR…

Somebody cheap who you can afford to take a chance on and will pump some life back into a wilting program. Somebody who, say, played at your school and knows more hoops than anyone else you could possibly find.

I think you all know who I’m talking about.