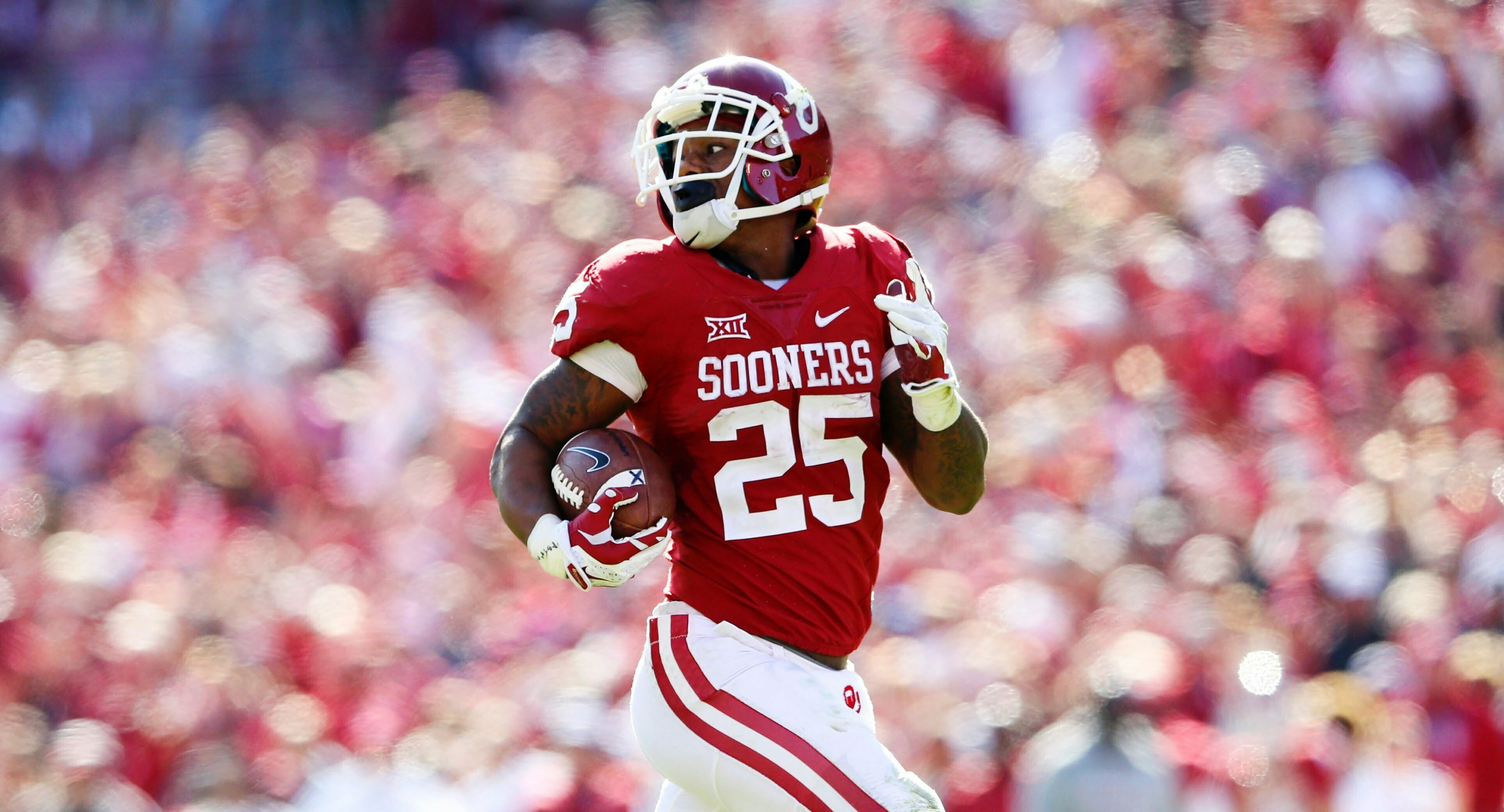 The Joe Mixon tape depicting a future professional football player delivering a devastating blow to the side of a small woman’s face is not really about Joe Mixon. Oh sure, those 5-10 seconds are about Joe Mixon, and they changed his life forever. As has been pointed out, just like Ray Rice will never not be the guy who dragged his wife out of an elevator on a surveillance video, Joe Mixon will never not be the guy who punched a girl in a diner in Norman, Oklahoma. He’ll wear that crimson letter forever.

But everything that happened between the date Mixon threw the punch and this current moment is about OU head coach Bob Stoops, OU athletic director Joe Castiglione and OU president David Boren. And it is mostly about Stoops.

The complex issue that loud people yelling crazy things are ignoring is as follows.

If you include players, coaches, graduate assistants, athletic department employees and volunteers, Stoops is the head of a 300-person organization (approximately). All 300 of these people are receiving (some form of) money in exchange for a job related to OU football, and he lords over the entire fiefdom. He does so quite well, too.

Stoops is one of the handful of people in Oklahoma who have unilateral authority when it comes to decision making. If you were to make a list of the five strongest non-political figures in the state of Oklahoma, he’s on every list. No question. He has real power (and bunches of it), and everyone involved with OU football including those of us on the outside knows it.

The crux of this issue is that you can do one of two things when one of your players does something like what Joe Mixon did.

For example: Let’s say you suspect Travis Ford was fixing basketball games during his tenure in Oklahoma. The hot take here is, “Yeah, that sort of makes sense!” But Travis Ford was being paid over $2 million a year to win basketball games so he would have to be getting paid nearly that to lose them just to ease the risk. When you think about the fact that he would never get hired again if he’s caught, he would have to be getting a lot more than that to fix games just to cover his future earning potential.

The bottom line — it doesn’t make sense for Travis Ford to fix basketball games. It doesn’t even remotely make sense. Most humans are rational, logical creatures. Especially smart, successful ones.

That’s what’s so confounding about this Stoops thing. He made an illogical decision at a critical time. Joe Mixon was an unproven freshman who hadn’t played a down. Could he have become the next Adrian Peterson? Sure. But he just as easily have become the next big-time bust. Stoops bet (heavily) on the former, though, and he was right.

I’ve seen the argument that Stoops was just trying to “save” Joe Mixon, whatever that means. This is a misdirection by people, though. It doesn’t matter what Stoops’ intentions were in this case because regardless of intent, you’re still looking at the other 299 people in your organization and saying, “I know you’re going to be on the receiving end of this for the next three years, and I just don’t care. I need to win, and No. 25 gives me a real chance to do that.”

I asked my wife the other day what she thought about everything that is playing out, and she said something surprising. She was not outraged (mostly because she doesn’t really care about college football and people she doesn’t know). She was not in disbelief. She simply thought that as long as a person’s personal life is not directly affecting their work performance (i.e. going to jail, drinking on the job etc.) then she doesn’t necessarily have an issue with the decision to keep him. Prosecution, she noted, should be left to the authorities.

This is an unpopular position to take, but I think it raises an interesting point. The slippery slope of moral authority, while seemingly stable when it comes to things like punching women, can get out of control in a hurry. What if Bob Stoops starts removing players from his team who legally carry guns just because he doesn’t think that’s how society should function? What if he starts removing people who have a certain belief system (muslim, christian etc.)? How would everyone feel about that?

One of the bigger issues here that nobody is really discussing is that Mixon’s prosecution was so, so weak. We act like football programs should be jusge and jury when much of the ire should really be on the legal system. 100 hours of community service? For destroying another person’s face? That’s not even a slap on the wrist. It’s more like a hand massage and a manicure. If Mixon had actually been prosecuted and put in jail for an extended period of time, then the decision of whether or not to keep him is made for OU.

It made me think of that Charlie Strong team rules document that everyone made fun of. It’s easy to poke at retrospectively, but I actually think every coach in the country should say “these are our standards, this is what we’re about, if you don’t follow them, you gone.” It removes the ambiguity of moral authority and sets a clear vision from the very beginning of a player’s tenure at a given school.

Anyway, I posited to my wife that if I came upon a video of our recruiting writer Kyle Boone punching his wife, would she suggest that I keep paying him to write articles on Pistols Firing. She said no — we both said no — but that’s because she holds me (and herself) to a higher standard than someone she doesn’t know (Stoops). Of course! Because there is always a line.

And while moral authority might be a slippery slope, I personally think denouncing hitting women is a safe (and right) stance to take that will never, ever be controversial regardless of prosecution (although my Twitter mentions would disagree). I draw the line well before that, too, and I think everyone who is a part-time writer for Pistols Firing knows that going in. I can’t risk the rest of our (tiny) organization to “save” one individual. That’s unfair to the rest of our writers. I don’t have a Charlie Strong-like document, but that’s the deal you sign up for.

I don’t think Stoops necessarily made the incorrect decision when it comes to keeping Mixon because I don’t think there is necessarily a right or wrong answer when it comes to situations like this. There are only crappy outcomes. The minute a player’s hands wrap around his girlfriend’s throat or the second a running back’s knuckles press the flesh of a women’s cheek, there are no good outcomes. None. A decision has to be made, and it is going to be bad for one of two groups — either the other 299 or the one.

By watching this tape and keeping Joe Mixon on the OU football team (don’t talk to me about him being suspended), Stoops affirmed that you can pretty much do anything short of murder (as long as you’re not convicted) and remain in his organization. That’s a hell of a precedent. So when a freshman punter comes in next year and gets arrested for busting a bottle over the head of a Sig Ep at an off-campus party, all that punter has to do is point to Mixon’s case and say, “these are apparently the rules we play by.”

There is also a double standard for regular students and talented football players (but maybe not just any football players). People love to take a stance when that stance is convenient and makes them feel good about themselves. You should read this about the dichotomy of expelling a couple of OU students for using racial slurs vs. continuing to give financial aid to someone who broke a woman’s face. The contrast is stark.

So now we’re here. The decision has been made, and OU has doubled down on it since the video has been released. What choice do they have? Mixon will be vilified, and maybe he should be. But to me, the real issues here go way above Mixon’s paygrade (hold the jokes).

No matter what Stoops does over the next 5-10 years in Norman. No matter how many Big 12 titles he wins or College Football Playoffs he makes. No matter how many safeties he sends to the NFL or how many wins he adds to his Hall of Fame resume. He will never not be the guy who unfurled his organization at the feet of a college freshman and let that freshman walk all over him. He will always be the guy who risked hundreds of other people’s jobs on a speedy, stacked 18-year-old who held the keys to two Big 12 titles.

Stoops’ legacy is undeniable, and now it includes one of the most controversial decisions in Oklahoma college sports history. Nobody is perfect, of course, but Bob Stoops did the wrong thing for the rest of his players and everyone who works under him. Does he think about this? Does he care? I don’t know, but I do know that the bitterness of bad decisions never completely goes away. And no matter how many speeches or press conferences Stoops gives lauding the glory of OU football, that taste will be on his lips forever.