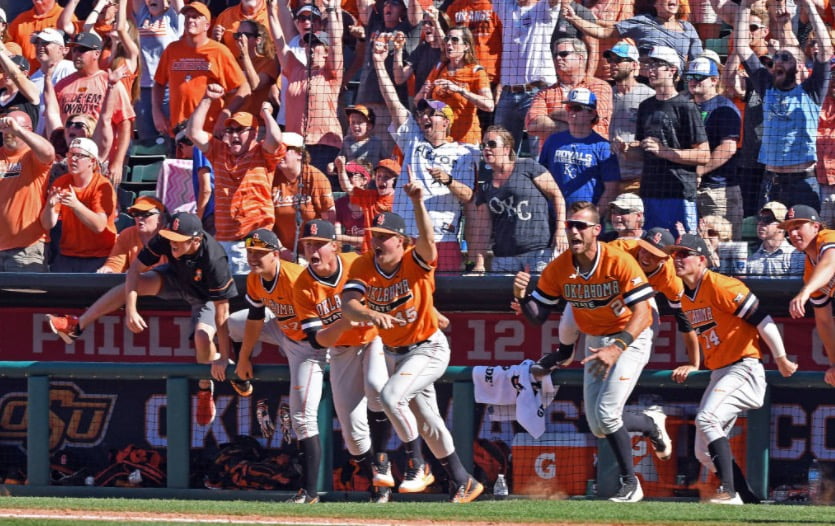 College baseball teams that are 24-25 in May are not supposed to still be playing in June, and yet here we are with Oklahoma State. They had lost their sixth game in a row on May 16 in Tulsa to ORU, 11-7. Two to Lamar. Three to Baylor. Their second (of three total) to ORU on the season. Prospects were grim for making the Big 12 Tournament, much less the NCAA Regionals.

But head coach Josh Holliday never packed it in, and his team answered the bell.

“I told the kids in the huddle, 12 or 13 days ago after losing to Oral Roberts, we were in a tough spot,” said Holliday after his team touched off its sixth straight win and took home the Big 12 Tournament trophy on Sunday. “We talked about how fascinating it would be to get on the other side of that, and then look back and figure out how we did it. I can’t tell you how thankful I am that they did that. We learned a big lesson on how to turn something around that isn’t going your way.”

I love that he used the term “fascinating.” With Holliday, you get the feeling that all of this is less a job than it is a big social experiment in which the participants repeatedly dress in orange and black. He doesn’t just talk about how baseball should reflect life, he displays that rare quality where he’s somehow able to distill what is happening in real time for his current players to look back on in 10 or 20 years.

When you love your guys this much and it's real, they'll run through walls for you. This is why @joshhollidayosu is the nation's best coach https://t.co/UJqCJT1FWU

He captures the past, leverages it in the present by wrapping it in hope and sends it off into the future. Less Gary Ward, more TED Talk material. And his players light up when asked about it.

“This season was full of highs and lows,” said Big 12 Tournament MOP Garrett McCain. “At the beginning of the season, everyone preached that this was a marathon and not a sprint. There were moments where we showed glimpses that we could play this style of baseball, and it was almost like we would go to sleep and forget what we had just done. After that Oral Roberts loss, having Coach Holliday talk to us about how cool it would be to flip our situation, his confidence really resonated in us and allowed us to play better.

“The amount of support we have from our coaching staff is incredible. We played like we had nothing to lose. It feels great to finally have experienced that ‘flip’ that coach was talking about.”

OSU is now projected to be the No. 3 seed in either the the Stanford regional or Arkansas Regional. Ideal? No, but eons from where this team was 10 days ago. OSU will likely get a No. 2 seed (examples from those two regionals: Cal State Fullerton or Missouri State).

Can they continue this incredible streak, or was the apex last weekend in OKC? To me, the Regional bid is nothing more than a unintended benefit for last weekend. If conference champs didn’t get to keep playing as automatic qualifiers, it wouldn’t much matter because of what happened over five days last week.

Because when it looked like the season was going to come to an end with a whimper, the Cowboy baseball team roared back in response to the challenge — maybe we should call it an inquiry — from Holliday after the loss to ORU. That’s the part that matters when you’re trying to build a 15-year or 20-year product or company. Holliday gets this.

Josh Holliday on #OKState's historic #Big12BSB title run: "If this is the only choice we have … why not do it?" pic.twitter.com/PNmMX6fw3a

“These kids took the initiative to continue to fight instead of rolling over and dying,” added Holliday. “These guys did OSU baseball a good service. They represented their university, our fanbase, our school tradition, and I just appreciate all of their efforts. We hung in there all year long, and we were pretty much kicked to the curb as far as having any chance here in Oklahoma City.”

Now? A second Big 12 Tournament title and outside shot at another trip to Omaha.