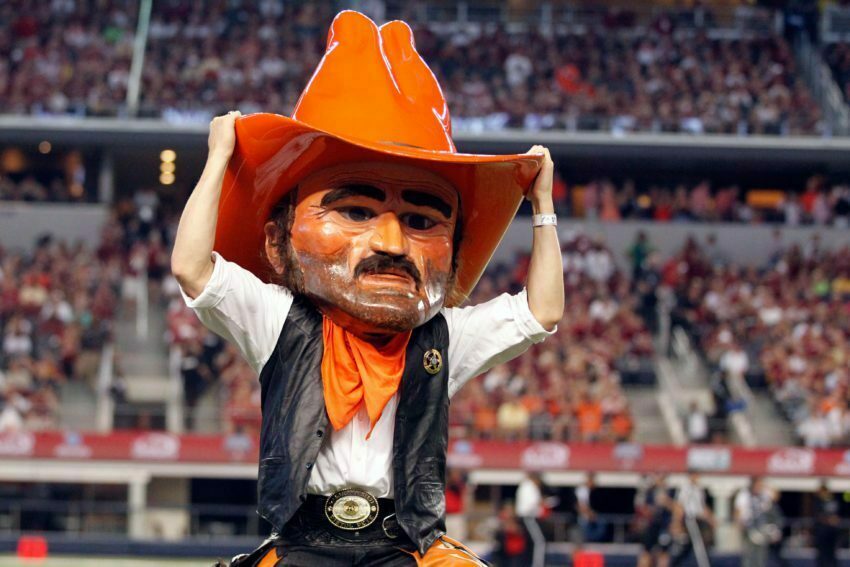 OSU’s daunting four-game stretch continues this week with a trip to the couch burning capitol of the world, Morgantown, West Virginia. That means a new batch of guest pickers and bets for this week’s King of the Game.

This week’s picks from the enemy come from Ryan Decker, a broadcast journalism major from West Virginia University who helps cover the team for West Virginia Illustrated.

Our fan picker this week is Robert Whetsell, who’s been begging to be the fan picker since Week 1 of the season.

Let’s get to this week’s bets:

• Bet Against the Spread: OSU (-7) – The Cowboys are favored by a touchdown against a West Virginia team that’s scored just three fewer points this year than the Cowboys. Can OSU cover?

• More Receptions: James Washington or David Sills V – The two best receivers in the Big 12 will be on the same field on Saturday. Which will have more catches in the game?

• Over/Under: 4.5 punts – OSU and West Virginia are two teams not used to punting the ball in games. Will fans see the teams punt more than 4.5 times or will they see an offensive shoot-out?

• King of the Game: Quarterback (OSU or TTU) — West Virginia’s Will Grier leads college football with 26 passing touchdowns. Mason Rudolph leads the nation with 2,650 passing yards. Who has the better game? As usual, Highlander rules (there can only be one).

Bet Against the Spread: West Virginia – Coming into the season I had OSU at 11-2 in the regular season with their only loss coming at West Virginia. So far this year, nothing has convinced me that won’t still be the case. The Cowboys can pull it off, but I think it’ll be a  three to four point victory.

More Receptions: James Washington – Despite a young and questionable secondary, OSU has held opposing teams’ top targets mostly in check. Granted, Sills will be the best wide receiver they’ve seen this season (and Grier is the best quarterback they’ve faced), but I think they do enough to keep Sills somewhat stunted. Washington meanwhile, nabs eight balls for a big game.

Over/Under: Over – I think both teams have shown to be inconsistent against decent competition. I expect five to six total punts, though not many 3-and-outs.

King of the Game: Will Grier – West Virginia’s run game has been suspect this season. I think Rudolph has a good day, but Grier throws the ball more and better on a day when the forecast predicts a high of 57 and rain at kick-of.

Prop Bet: With the crummy weather, the teams combine for five total turnovers. It’s going to be an ugly one.

Bet Against the Spread: OSU – I’ll take OSU to cover. I think the Cowboy offense will find West Virginia’s run defense (9th in the Big 12) a welcome reprieve from the defense they faced in Austin last week.

Over/Under: Over – I think we will see plenty of offense on Saturday but I still see the punt split somewhere around 4-2 WVU-OSU.

King of the Game: Mason Rudolph – I think for the Cowboys to get the win, Rudolph needs to have the better game. Plus, he had one of his worst outings of his career the last time he went to Morgantown. Yes, you could have said the same thing before the Texas game last week. But again, this is not the same West Virginia defense OSU welcomed to Stillwater last Homecoming.

Prop Bet: What the heck, OSU’s defense scores its first TD against a Big 12 team since last time it played inside Milan Puskar.

Bet Against the Spread: West Virginia – OSU enters a hostile “Blue-Out” environment with a chance of late game showers. Will Grier and Sills form a deadly combo. I think OSU pulls it out in the end, but it’ll be even closer than the experts think.

More Receptions: David Sills V – The template is officially set on how to contain the OSU air attack thanks to TCU and Texas. Sills is really only competing for receptions with Jennings and White. At 6’4″, Sills will be a tough matchup for whichever corner/safety is tasked with him.

Over/Under: Over – I certainly didn’t expect 20 punts between OSU and Texas, so I’ll say we see at least 5 punts, maybe more.

Prop Bet: I’ll say we attempt less than two field goals. After the Texas game, it is clear that Ammendola cannot be trusted inside of 30 yards. OSU didn’t attempt a fourth-down conversion against Texas which was completely bizarre. This trend does not continue Saturday.

Bet Against the Spread: OSU – Prior to the season I said this game would have a similar outcome to last year’s WVU/OU game. Now that we’re at the midway point in the year, I don’t think it’ll get that out of hand, but the Cowboys do cover. WVU keeps it close at first, but OK-State pulls away the longer the game goes on.

More Receptions: David Sills V — James Washington is certainly the most proven wideout in this game, but David Sills is going to get targeted a lot in this one. The connection between he and QB Will Grier will have to be running on all cylinders if WVU wants to stay close. Washington may amass more yards, but Sills wins the receptions battle, with two catches counting for six points each.

Over/Under: Over – I’ll take the slight over. Defenses will each get a couple stops, but the punt that takes it over will be because of one of the offenses going for a couple deep passes on one possession and not having the timing down.

King of the Game: Mason Rudolph — Will Grier is the best QB at WVU since Geno Smith, period. But Mason Rudolph’s talent will be on full display Saturday. This West Virginia defense still hasn’t completely figured itself out, sometimes appearing to be absent for quarters at a time. I’m afraid they may be absent for an entire period this weekend as well, which will give Rudolph all kinds of time to find receivers to throw to. Lack of consistent pressure from the Mountaineer D-Line comes in to play, as well.

Prop Bet: Over/Under 3.5 Charles Hayes video board appearances — If you haven’t seen it yet, WVU fan Charles Hayes has become the unofficial hype man of the WVU football team in less two weeks’ time. Hayes, a former West Virginia cheerleader, came to his first game as a fan two weeks ago when the Mountaineers took on Texas Tech. He alone got the crowd back into it, and helped swing momentum.  He’s back this week hoping to do the same.  Take the Over on this bet as well, we’ll be seeing him a lot, especially if WVU keeps it close.

Bet Against the Spread: West Virginia – Based on last weeks results (MIA offense, stonewall defense), I fully expect our offense to run wild and Holgorsen to field dress our defense. Besides, OSU hasn’t covered in three consecutive games.

More Receptions: David Sills V – This is the only logical choice I’m making. Sills will have 6-10 catches mainly because he is THE man for WV’s WR corp. Washington will have 4-6 among plenty of other acceptable targets.

Over/Under: Over – (5) Despite my “Bet Against the Spread” choice. Stupid, I know.

Prop Bet: OSU with six or more completed passes under 15 yards (minus YAC) inside the numbers.​ See “King of the Game.” If we see at least six completions short, over the middle, then “somebody” got the message. BTW…I will definitely be keeping track as the PFB staff has been known to fudge this one for their own advantage.

Hey, if you were in last place in your own, meaningless, bragging rights contest, you’d cheat too.​
Related Topics: