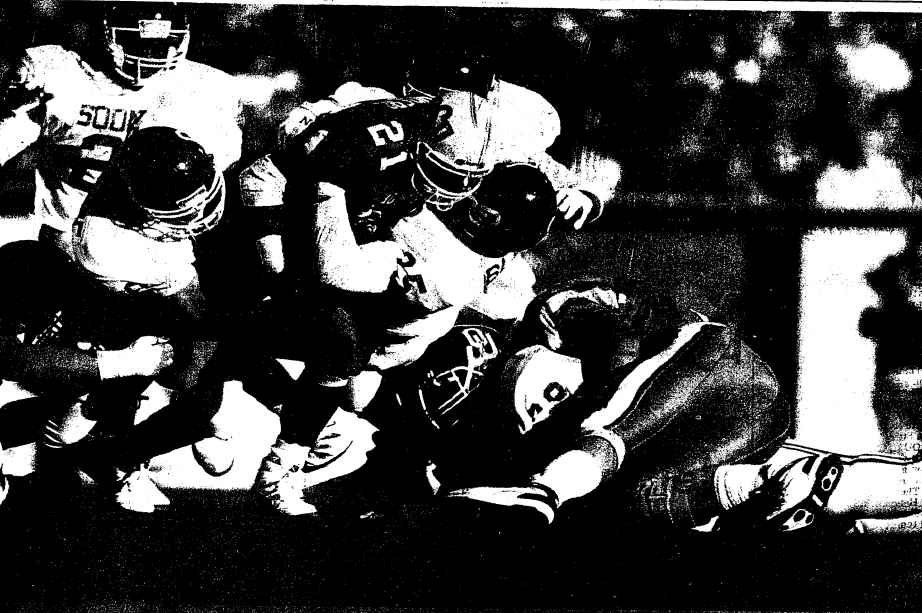 One thing I’ve been wanting to do is walk back through all of Barry Sanders’ games from the 1988 season and write about them individually. That’s what this series is about. Old articles, quotes, stats and tidbits you may have missed or didn’t know about.

Sanders ran it 39 times for 215 yards and 2 TDs in one of the all-time great Bedlams and was the star despite a 31-28 Oklahoma State loss. Here’s how the Oklahoman opened on Sunday morning: “Eighth-ranked OU’s 31-28 victory over No. 12 OSU, in perhaps the most exciting Sooner-Cowboy football game ever played, was ultimately decided on two happenings — The Call and The Play — in the final minute.”

You guys already know about both of those so I won’t dive into them (also because I don’t have three hours to commit). Instead, let’s do Sanders’ performance — his worst (!!!) over OSU’s last six games — a little justice.

OU only gave up 128 a game, and Sanders absolutely torched them to the ground. The Sooners could do nothing to stop him, and everybody (including OU) knew it.

“He wasn’t big and he wasn’t tall, but he had such an unbelievable change of direction. He could change direction in a heartbeat and be right back in full speed again,” former Oklahoma defensive tackle Scott Evans told ESPN. “He had this unique way of taking a play that should’ve been a 2-yard loss and turning it into a 20-yard gain. He was just phenomenal. We knew going into it we had no chance to stop him. We were just hoping we could contain him.”

OU jumped out to a 14-0 lead and led 21-7 after the first quarter, but OSU came storming back, outscoring the Sooners 21-3 and making the score 28-24, up until the 2:33 mark in the fourth quarter when OU scored its final TD to make it 31-28. The Call and The Play happened after that.

Sanders had two of those four scores for the Pokes, both 1-yard runs in the fourth quarter, the second of which made it 28-24 with just 8 minutes left. It wasn’t enough for the win, but it was enough to make him the clear Heisman frontrunner. His performance was highlighted by a 67-yard run in the second.

“Barry gave him a little stutter-step and boom, skipped on by him,” Sooners quarterback Charles Thompson told ESPN of the run. “You knew right then you were watching somebody that was great.”

Here’s the best part though as OSU drove late before The Call and The Play.

Sanders and the Cowboys were driving for the winning touchdown in the closing seconds, prompting a stressed-out Switzer to actually light up a cigarette from the sidelines. Gundy’s fourth-down heave into the end zone, however, was dropped, allowing the Sooners to escape the new Heisman front-runner.

“The OU game clinched him the Heisman,” said Larry Coker, who was OSU’s offensive coordinator. “Because he was so unbelievable.” [ESPN]

Barry demurred after the game. “I wish I wasn’t really in the Heisman race,” he said after the loss. “I wish this was only a team sport. It’s really getting old talking about the Heisman.” 😳 No wonder Oklahoma State SID Steve Buzzard felt exasperated at his inability to get Sanders the requisite attention needed for a proper Heisman campaign.

Sanders’ dad was (and remained) a big OU fan so this game was strangely bittersweet. He even went to the OU locker room after the game to meet the other Barry (Switzer).

After the slugfest, Pat Jones gushed about his tailback.

“Everybody watch my lips,” said Jones. “I think Barry Sanders is the best collegiate football player in the country. I read someplace if anybody’s got a brain and a vote and they do not vote for this youngster they’re not very smart. I will fully agree with that.” 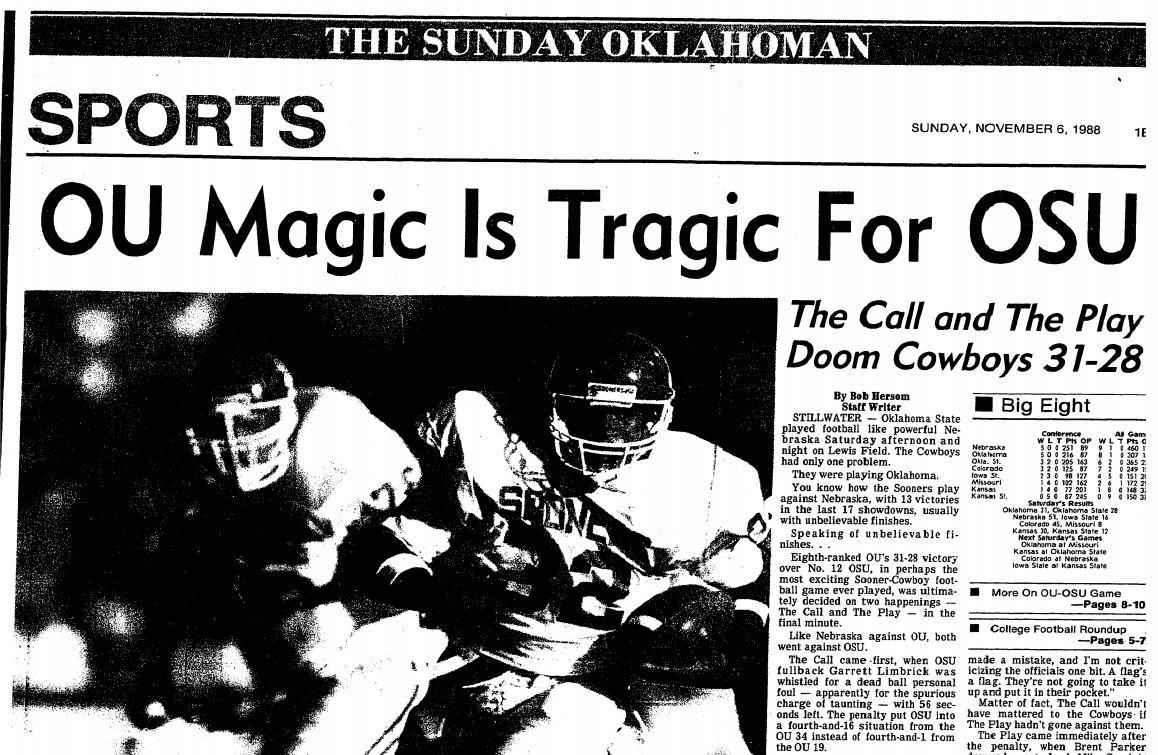 Here’s one more tidbit from that game. A sidebar from Oklahoman writer John Rohde entitled, “This match was made in heaven.”

While the loss stung (and still stings), it did provide Sanders with a little giddyup into the last lap of his Heisman run.

“I think this gave a lot of America the first time other than seeing some clips of him,” said Jones a few years ago. “From a credibility standpoint, for a game of high stakes even though we didn’t win it, this just continued to cement what Sanders was doing as far as these kind of numbers against quality competition.”

After having gone back through the first eight games of this season, this is the first one that has stood out to me in the way of folks saying “he should definitely win the Heisman.” The noise wouldn’t get any quieter the rest of the year.