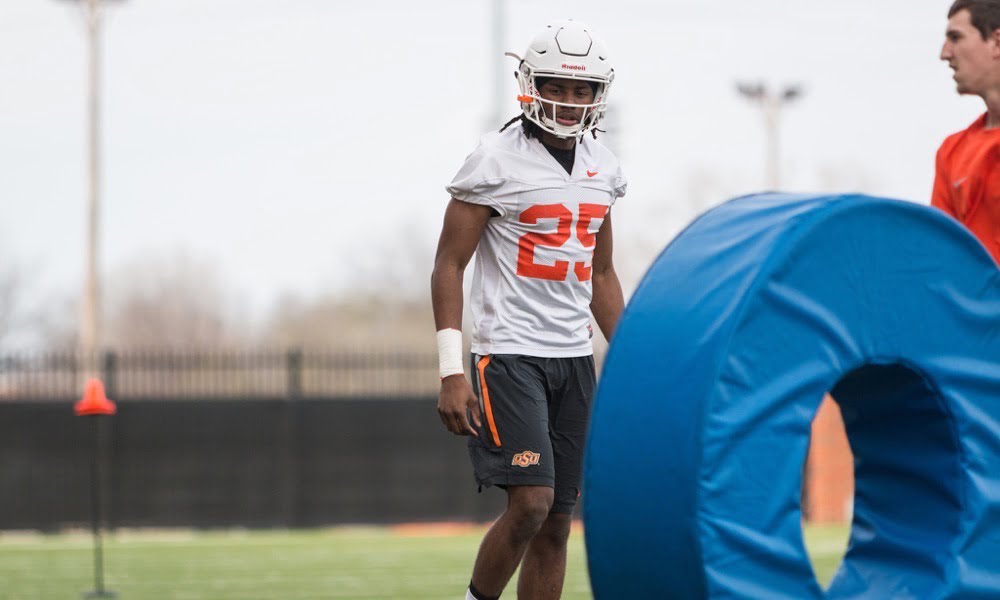 Mike Gundy addressed the media on Monday following the first spring football practice. As confident as ever with the mullet in full flow, the head man addressed what many would consider borderline major changes to the roster.

Kenneth Edison-McGruder, who spent time at safety last season, will be moving back into the box at linebacker — a position he dabbled in last season including during the Alamo Bowl. And perhaps the bigger news: Ramon Richards is being moved from corner to safety this spring.

“We used Ramon Richards at safety last year,” said Gundy. “We feel like he has good range and that he can make some plays from there. .. Ramon will be a guy who plays more in the middle of the field.”

That’s obviously a major change, even if it winds up being temporary. Richards has played at cornerback since his true freshman season (which we won’t speak of), and last year he emerged as one of the top playmakers in the secondary. He has a knack for finding himself in the right place at the right time, and it seems that quality coupled with his previous experience at the position and Gundy’s confidence in his youngsters is enough to make the position change.

“We like the young guys. We like what they bring to the table. They just don’t have a ton of experience yet. They’ve had a good offseason.”

The young guys in the program do have some promise. OSU signed a solid 2016 class of defensive backs, all but two of which took redshirts last season. But now it’s time to step up and see what they can do. Here are the four candidates most likely to be in line for immediate playing time, including a true frosh — along with some candidates who I think have a chance to separate themselves this spring. I’ll also make a final assessment at the bottom.

Harper is the prospect who should be next in line to replace Richards. An early enrollee a season ago, he made his presence felt mainly on special teams last season. But he’s an ideal candidate to step up right away given his time spent in the program and his ceiling as a defensive back.

Harper has a perfect frame at 6-foot-1, he was a lockdown defender in high school out of Lamar — the same school as Texas QB Shane Buechele — and he’s likely going to see a majority of first-team reps.

Green was a lesser-heralded recruit out of DeSoto, Texas, whom OSU was very high on in the recruiting process. Like Harper, Green has a 6-foot-1 frame and played for one of the more dominant programs in Texas High School football. He played a good chunk of time as a true freshman, and while he may not have been a flashy recruit, he has all the fundamentals down and a good base to build on.

I’m really high on Green as well. His mechanics and footwork are well beyond his age, and he has the discipline to not bite on double moves and keep his receiver in front of him as we saw last year. That’s something you can coach, but it makes it easier if they’re already heady enough to know those little things.

Representing first team All-Confidence, Williams might just be the next big thing if his attitude towards his own game rounds into on-field results. The former Shreveport (Louisiana) native took a redshirt last season, and he’s been able to bulk up and grow into what was a promising but thin frame.

Williams might be the most raw of the group, but he has a high upside a la Justin Gilbert. He’s a former track star and will figure to be in the rotation in some capacity.

Color me intrigued with LaMarcus Morton, an early enrollee out of Gilmer, Texas, who starred at wide receiver in high school. Morton played all over the field including safety, but cornerback is going to be fairly new to him. Because of the need for defensive backs (and the overflow of talent at WR), Morton might be a natural fit on the outside.

Like many others, he’s also a former track star. But his time spent as a wide receiver gives him an edge. He knows the mentality, and thus might be able to defend the pass better. Spring will be huge for him in learning and picking things up on the fly, and I don’t think we’ll learn much about whether he can contribute right away until the summer. But he’s got a high ceiling and the need might usher in immediate playing time for him.

Oklahoma State is confident in its youth, but make no mistake, it is also making every effort to supplement it with experience. Clemson defensive back Adrian Baker is a top priority after making an official visit last weekend, so don’t be surprised if Gundy fills a hole with a graduate transfer like he’s done in the past.

The group on the whole is young but talented, sharp yet inexperienced. Working in young guys (and moving Ramon to safety) will speed up the growing pains with extra reps against a future NFL quarterback. If they’re not good, Ramon can always switch back to the outside (Glenn Spencer already noted that). But I think this is a good move on the whole to get young guys reps and work them in right away.

There are several players who might go from relative unknowns to starters in 2017, and the likelihood seems high that it will be one (or more) names from this list.