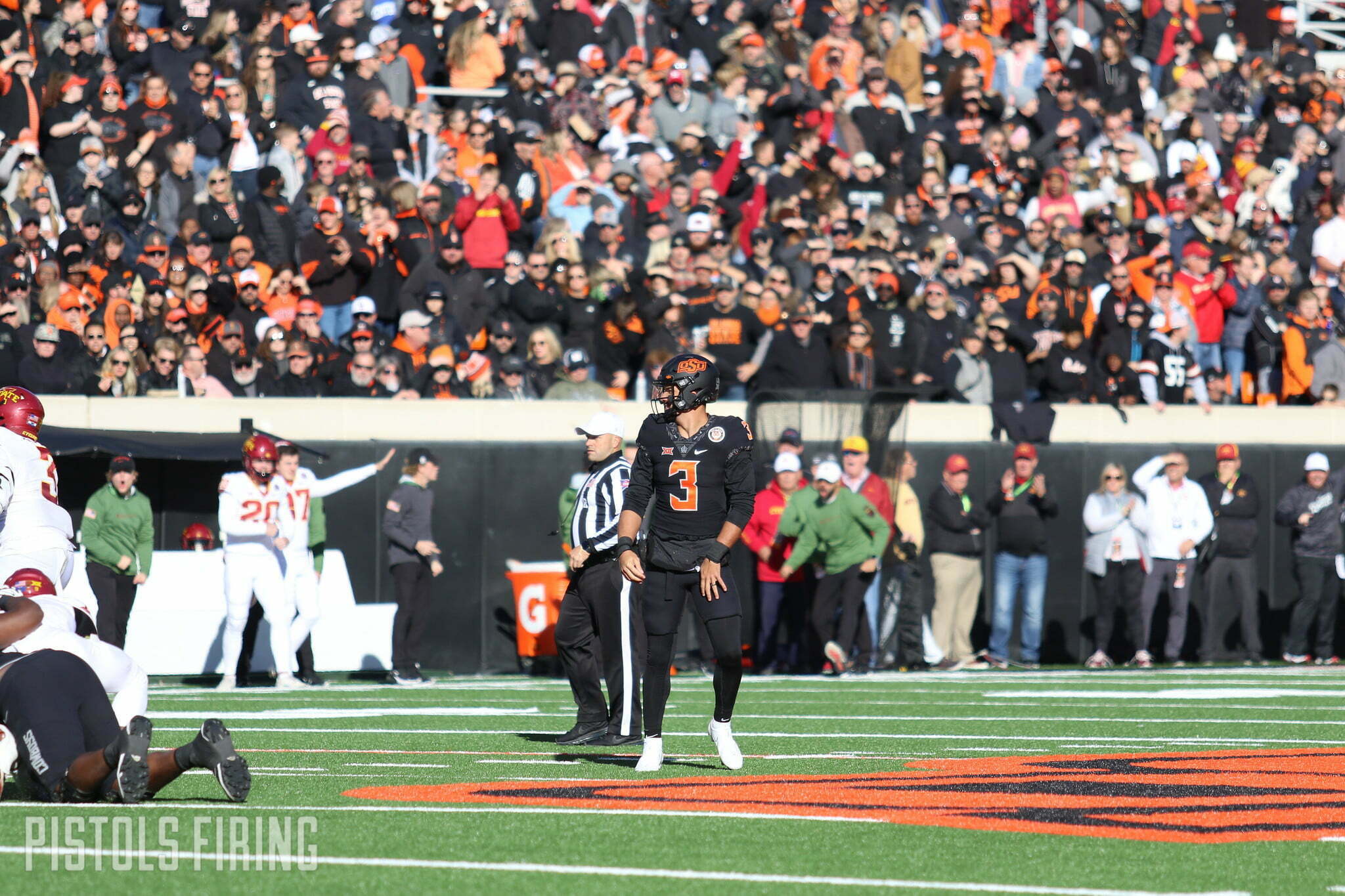 Spencer Sanders did not start the game for Oklahoma State at quarterback after missing last game with a shoulder injury and most of this week’s practice both with the ailing shoulder and a death in the family. But Spencer Sanders sure finished the game.

Sanders was inserted by Mike Gundy and the staff late in the third quarter, and with OSU’s offense sputtering, he gave them an instant spark. On his second possession, they scored a TD, part of a 10-0 run to close the game in a 20-14 win.

But why would Sanders’ health be bad enough to sit early and OK enough to play late? How does that calculation change so much during a game?

Part of it, Mike Gundy said postgame, was an effort to protect Spencer from Spencer. The other part seems to be his lack of reps lately; not only was he “gone most of the week,” Gundy said, but he is believed to have missed a majority of practice the last few weeks as OSU plays it safe with his injury.

“We knew that he was available but we had preferred to not put him out there for an extended period of time,” said Gundy. “But Spencer’s played 50 games here. You have leaders who, I think sometimes, when they know there’s a guy that’s playing that’s not 100%, they’re like ‘OK, I’ll fight for that guy.’ It’s just human nature. So when we brought him in, we just said ‘hey, we’re going to throw it every down.’ We couldn’t run the ball.”

Sanders changed the complexion of the game drastically. OSU’s offense had three consecutive three-and-outs for negative-two yards and an interception in the three previous possessions before he was inserted into the game. Even without practice reps and an injury, Sanders’ experience within the system and his talent ultimately won out.

“I was impressed. He’s been doing this five years,” Gundy said. “I said ‘He can do this blindfolded.’ He can break away and coach it. He knows it like the back of his hand. When he comes in, we can just call anything, we can call things from a month ago or two years ago and it doesn’t make any difference.”

Gunnar Gundy started Saturday’s game after last week’s starter, Garret Rangel, carried an injury designation into the game. He fared OK — finishing with five completions in 12 attempts for 103 yards and a TD — but he had two back-breaking INTs in the game, too. So with the offense stuck in the mid, a surprising in-game QB change back to a dinged-up Sanders felt like the right and only call.

“He’s got 50 games of experience,” Gundy told ESPN. “When you bring a guy off the bench like that — we want to protect him — but he brings you charisma. We were able to throw the ball around and find a way to get things done.”