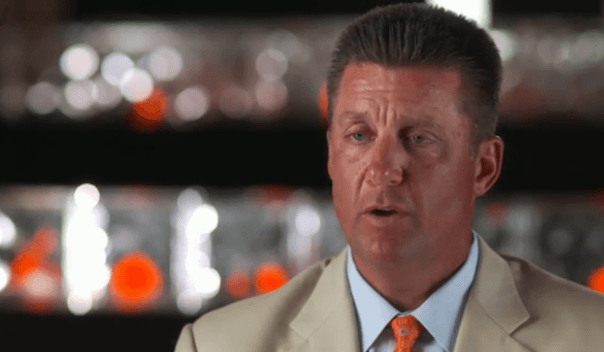 Mike Gundy sat down with Seth Davis recently to talk about his gig and what it would be like to coach in the NFL.

I thought a couple of his quotes were pretty interesting.

“The one thing about the NFL is it’s intriguing because completely different than what we do in college,” said Gundy. “You’re managing grown men that are making millions of dollars.”

Has the NFL ever been alluring to him in general, though?

“I’ve had some talk with a couple of organizations. It was interesting listening and learning from them what it takes at that level.”

“There could be a point in my career that if I ever decided to try something different (because that can happen) it would be more towards the NFL than it would be another college just from the loyalties I have to Oklahoma State.”

He certainly made it sound like he’s more likely to be the next coach of the Jacksonville Jaguars than he is the Florida Gators.

He’s not going to leave for the NFL, either. Look, I love Gundy, but he struggles to manage starting QBs at the college level much less a complex roster full of egos much bigger than his at the next level.

That’s a recipe for disaster and I’m pretty sure he knows it. His destiny has always been this job and despite the overtures sent towards the east coast of late he’s self-aware enough (I think) to know that this is a once-in-a-lifetime marriage.