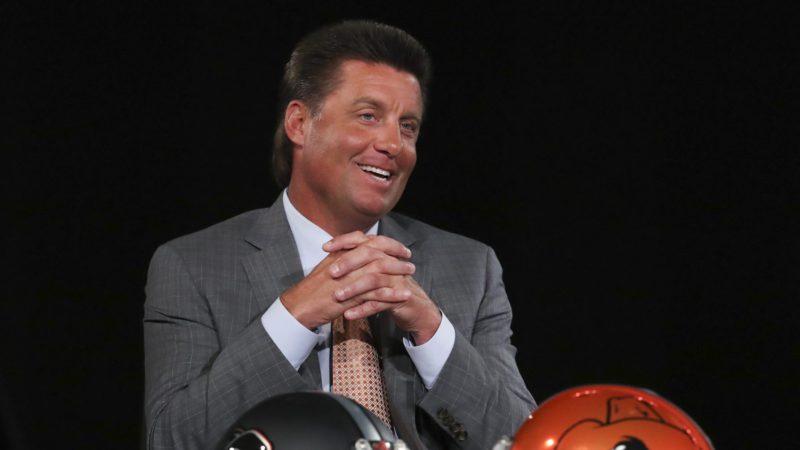 Sunday the 94th annual American Football Coaches Association Convention kicked off in Nashville, Tennessee. Put on by the AFCA and CBS Sports, the convention consists of four days worth of sessions and panels put on and geared towards high school and college football coaches culminating in the main event, the AFCA Awards Show, which took place on Tuesday night.

Luckily for us, a few quotes made it out on Twitter. Here are some highlights.

I love that even the AFCA is having fun with the mullet.

Delta Ballroom A is the place to be! Head there now to hear @CoachGundy and his mullet discuss Oklahoma State football! 3pm Start! #AFCA17

Hats off to Gundy for keeping it through the convention, though.

Mike Gundy speaking at AFCA. The mullet is still glorious, and everyone here is whispering about it.

Mike Gundy is here. So is his mullet. pic.twitter.com/n9EhCcnKBr

Many admire coach Gundy's mullet from afar, but it's so much more glorious in person. There are now words pic.twitter.com/P9HV90MWxc

Mike did actually get to talk about coaching, though.

Gundy explains that they don't allow players to post from 5pm Friday until after their game Saturday's to limit distractions.

Gundy talked about length of meetings…

Gundy says the NCAA 20 hour rules isn't a factor for them. Position mtgs are 40 minutes or less based on research of attention spans.

Gundy caps meetings at 40 minutes and practice at 1 hr 40 minutes to help keep guys engaged and fresh. Lots of research.l behind it

We need to add “millennials” to the Bingo card, by the way.

Gundy: "We're seeing more and more millennials that just stop playing. We backed off a bit and don't encounter that nearly as much"

Gundy also touched on his/OSU’s proactive approach to the physical side of training.

Gundy says even his strength staff has cut back 30% lately. Players are in such good shape, wants to avoid overtraining them.

Gundy: "We haven't had a live tackle period in 8 years. Everything is thud. We're better tacklers bc of it and healthier"

Gundy also spoke about the personal side of coaching and how important that is.

Gundy notes that his coaches have to coach their guys as people AND as players.

Gundy: "I highly recommend talking to your guys for 10-15 minutes a week about developing them as ppl and let them talk to their peers too"

Gundy is a believer in that uyou can't treat EVERYONE on the team the same. Individuals have different upbringings and life experiences

I thought this was very interesting.

Gundy has a players council that helps w discipline….jokes that he takes their guidance, until they suggest kicking a good player off team