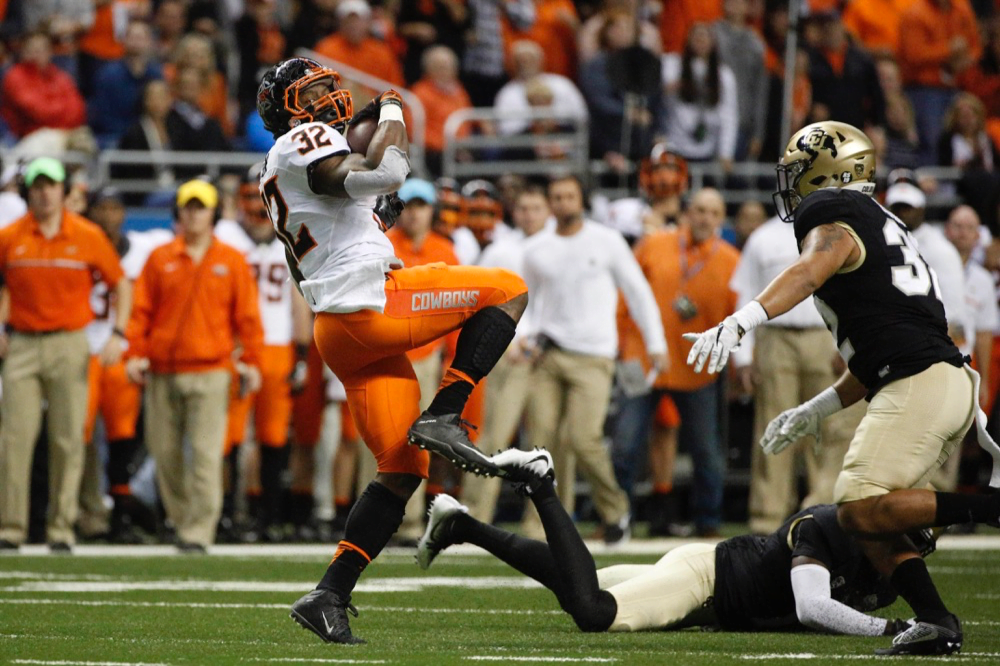 This is Part 5 of a six-part series on Oklahoma State recruiting that explores the relationships, the connections and the gold mines Mike Gundy has gone to over and over again in his time in Stillwater, USA.

In Joe Wickline’s time at Oklahoma State as offensive line coach, he developed at least one chain-strong tie on the recruiting trail.

Every year, Wickline called up a man named Cody Crill in Corsicana, Texas, an hour or so due south of Dallas. They would talk football almost exclusively, but other topics slipped in from time to time, no doubt. Wickline and Crill’s boss got along well, and there was a track record of success to prove it.

When Crill became the shot-caller, that relationship just siphoned on through. Crill had what Wickline wanted. Crill is what you might call a guru for offensive linemen. He has sent 20 of them to Division I programs and coached several who have gone on to the NFL.

“We always have O-linemen here,” he said.

And Wickline wanted in. Every year. So he called and just plainly asked who Crill had for him that particular year.

It might seem sheepish. It might seem lazy, but when you’re desperate, sometimes a connection is your only way out of a situation gone sour, and for a while, Cody Crill, head coach at Navarro Junior College, was that out.

Driving into Corsicana from the south, there are signs on the highway directing you toward cities like Waco and Houston. From the north, it’s Fort Worth and Dallas, almost like a daily taunt for all the players who so desperately want to get out but can’t.

Some do. Since Gundy has became coach in 2005, there have been four signings from Navarro, including Calvin Barnett. And when you add up all the JUCO products in that time, there have been more than 50 from across the country. 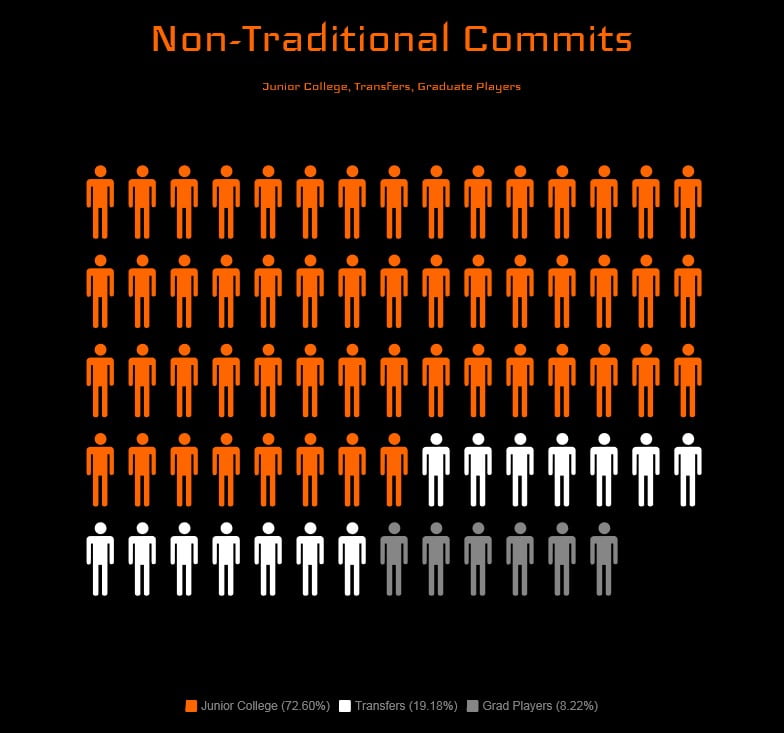 But in junior college, leaving is about overcoming one thing: Developmental classes.

“It’s like 95 percent of guys, if you didn’t qualify in high school, you’re gonna test into developmentals,” Crill said. “If you get stuck in the lowest level of developmentals – which when they take that placement test, that’s where they’re gonna be — it’s impossible to get out of college in three semesters.”

Developmental classes are courses that don’t count toward your degree requirements but serve as, “refresher” classes for students who aren’t quite ready for college-level material. At least that’s how they are described on the internet.

If these guys tested well on the ACT or SAT, they would already be at OSU or elsewhere, Crill said, and when they get to a JUCO, they have to test again. When they do, they get slotted into the developmentals.

“So what happens to these kids is they get stuck,” Crill said.

Spinning their wheels trying and failing to make progress to leave a college none of them planned on attending, and that is only the beginning.

If a star linebacker plays his first year on campus at Navarro, a timer is instantly set for three semesters to complete and pass 60 hours of developmental courses, including two classes of English, history, government and college algebra to name a few. That is 20 credit hours per semester.

By OSU’s standards, that student wouldn’t even qualify for block tuition because it would be too many hours. Then throw a 2.5 GPA requirement on top of that and a week’s worth of football practice, meetings, film sessions and games, you are fighting for your athletic life.

But some get through it. Few, but some, even Heisman Trophy winners like Robert Griffin III and Cam Newton, went to the schools Gundy likes to pick from. Some junior colleges are better at staying on top of it than others, and OSU deals heavily with the ones that do.

Navarro has sent four players to OSU since Mike Gundy became coach. That’s tied for second among all two-year schools in the nation behind Butler Community College.

The JUCO in El Dorado, Kansas, has a knack for getting guys in and out of developmental classes and onto their degree sheets. Butler’s athletic communications department did not return any follow-up emails about possible interviews, but extrapolating from the colleges that did, coach Tim Schaffner at Butler must be highly involved on the academic side.

Crill is an assistant professor at Navarro as well as the football coach. He said there are two routes you can take as leaders of a JUCO.

“You’re either deep into the academics and you let your coaches coach,” he said. “Or I coach more and I have to have somebody that’s deep into that.”

Crill promoted his staff and said he fancies the former and delegating the football side of things to those who have experience at four-year universities. That leaves Crill to the desk.

A lot of phone calls, checking on attendance sheets, making sure assignments are being finished and sending his players to get help if they need it. That’s the reality for these JUCO programs. It’s nothing like Gundy’s job in that regard.

“I gotta be way involved. I’ve got to be involved,” Crill said. “I probably spend more time doing that than I do football.”

Descending on the Targets

Then come Jason McEndoo, Kasey Dunn and the other Cowboy assistant coaches.

Hundreds of four-year coaches from as far as Ohio State and as unimpressive as NAIA universities descend on these junior colleges every year. The Cowboy coaches are no different. They hit the same spots year-after-year, too. 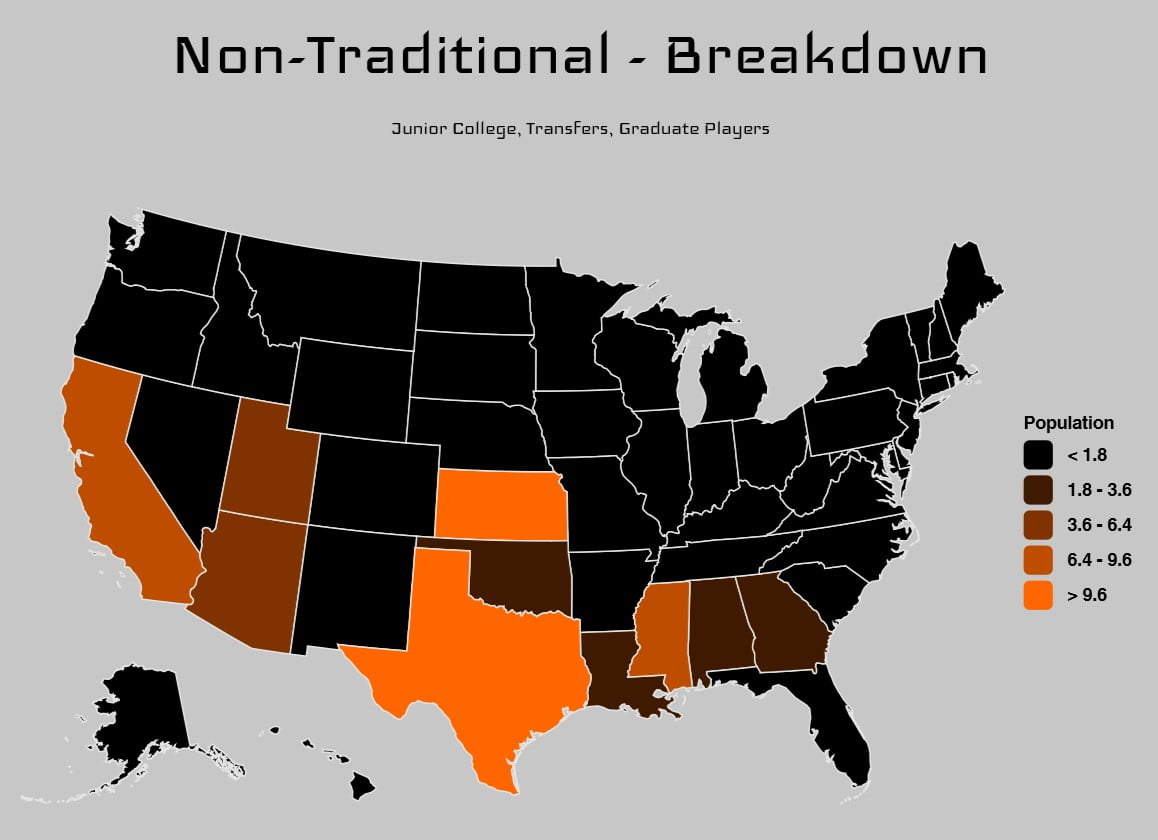 The influx of information is astounding. Each coach interviewed for this story used a slightly different variation of storing that information, but Blinn College coach Kevin Mahon and his staff use a computer software to organize all of the data.

Blinn compiles a profile for each of its players and blasts it out to every Division I head and assistant coach in the country. Mahon said if he didn’t, he would be doing his guys a disservice.

“We’ve put out 25 guys in division I this year,” he said. “Twenty-five. That’s unheard of. It’s marketing of the kids.”

That has been extended to OSU. In 2016, Gundy went and signed Tralund Webber out of Blinn. He wasn’t the first from there either. The Cowboys have also gained commitments from O-lineman Chris Grisbhy in 2012 and Alex Elkins, a linebacker, in 2011.

At Blinn and Navarro, repeat service is a commodity, even in tiny Texas towns like Corsicana and Brenham. Recruiting services like Hudl and 247 Sports have helped fuel that fire immensely.

When Mahon started coaching, he said he had to send tapes that could take a week before they reached the desks at OSU. Then came VHS. Then DVD. But as the quality of the video increased, the accessibility did not until Hudl.

“You’re an email away from getting seen,” Mahon said.

And when Gundy does see the tape, he knows what to expect when he goes out there to Blinn or Navarro or Snow College in Utah for that matter. The cultures are eerily similar, and the results speak for themselves. All you have to do is click send.

Mahon said at Blinn, the players have a genuine love for one another. It’s not like a “meat factory,” like you’ll find elsewhere or like it’s portrayed on TV shows like “Last Chance U.”

“Our kids, when they leave, I always ask them, ‘How did you feel about this place?’ And they say, ‘It’s the best decision I’ve ever made,’” Mahon said. “And every time I talk to a kid that’s been gone, he calls me up just to talk randomly, it always ends with, ‘I love you.’”

That’s a hard thing to instill at a place no one wants to be at, especially for players who qualified out of high school but became ineligible in college and basically had to be relegated to a junior college, maybe to return someday. For coaches like Crill and Mahon who understand their role as a “plan B,” it seems hard to accept, but they do. Mahon said he isn’t just coaching for his current players’ sake.

“If they ever have a kid, my job is to make sure they would come back and let me coach their kid,” Mahon said. “I embrace it, absolutely because you wouldn’t believe the phone calls we get back. Dede Westbrook is calling all the time. We help shape them. We’re one more person to help them, and they understand that.

That falls back to OSU. If the first guy works, Gundy is gonna go back for seconds.

Defensive coordinator Glenn Spencer said he appeals to the JUCO players because “they’ve been through it.” They have had the game threatened to be taken away for good, so they aren’t going to pick a university to transfer to based on glamor.

“They don’t care about the uniforms and all that,” Spencer said. “They wanna know what’s gonna get them prepared to go to the NFL. They’re looking at the depth chart because they know they’ve got two years.”

Crill said he believes the cultures at two-year schools rub off on the four-year coaches and found that shared beliefs lead to more visits and more signings. When Crill was an assistant at Navarro, he was put on plane duty, meaning he was responsible for picking up the coaches from the regional airport and bringing them back to campus. It didn’t happen often. Actually, only twice, one was Arkansas’ Bobby Petrino and the other was Gundy.

Gundy flew into Corsicana on a private jet, and Crill was one of the first ones to greet him off the plane.

“There are few coaches that you run into like that where they’re at their level, and I wasn’t even the head coach at the time, and he’s like, ‘Hey, Cody. Good to see you,’” Crill said. “There’s not a lot of guys that are like that.”

Certainly not for junior college coaches, I would presume. But whether it’s genuine is negligible. Gundy and all of the other hundreds of coaches who have passed through those Plan B buildings are there almost always out of circumstance, not want-to. That’s OK, Mahon said. They will always be there ready to shake hands with a transcript at the ready.

“Everybody’s gonna need you at some point,” Mahon said. “… Not every year we’re gonna have something for ‘em, and that’s the way it is. But some year we may, and they’re more than welcome.”