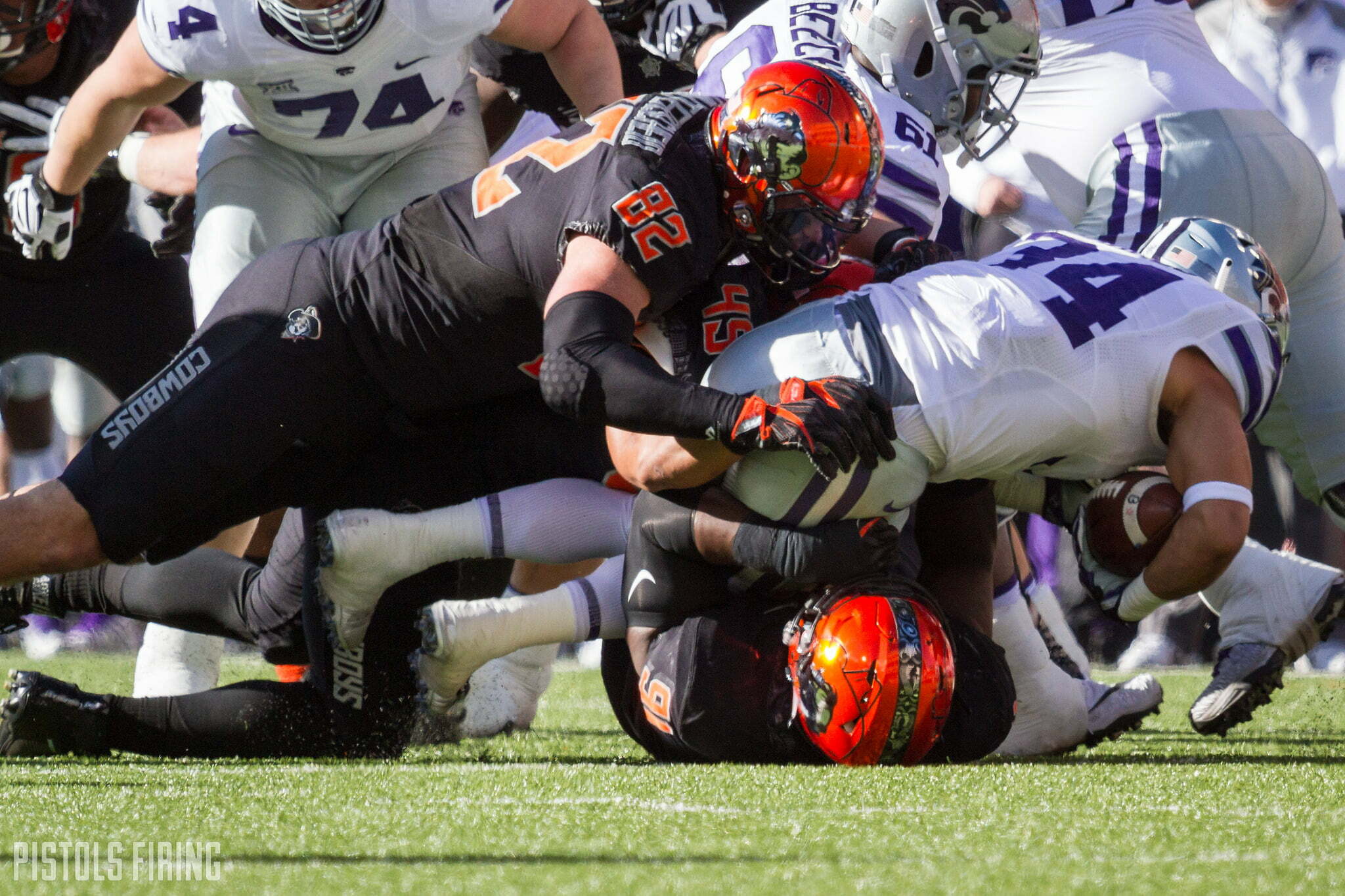 This is Part 3 of a six-part series on Oklahoma State recruiting that explores the relationships, the connections and the gold mines Mike Gundy has gone to over and over again in his time in Stillwater, USA.

Almost 30 percent of all the players Mike Gundy has signed have come from five conglomerated counties.

The Dallas-Fort Worth Metroplex was the Oklahoma State coach’s first hub when he took over in 2005, and it remains his bread and butter 13 recruiting classes later. Texas in general has been a staple of the Gundy empire, and the statistics to back that claim up are absolutely astounding. 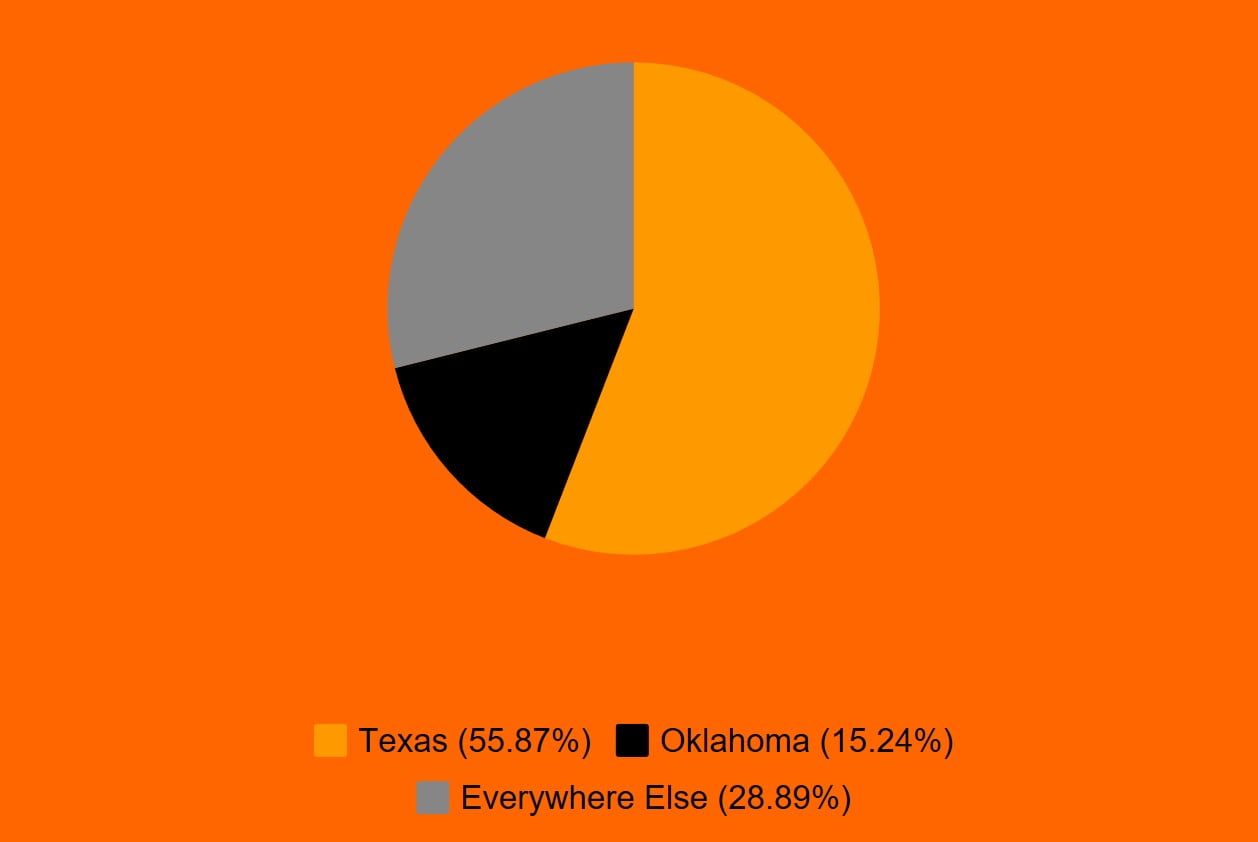 Although those numbers are stunning, the success Gundy has instilled in Stillwater has turned his million-dollar drilling company into a billion-dollar international pipeline.

In 2010, Gundy signed a personal best 20 athletes from Texas. That was about three quarters of his entire recruiting class. A year later, that number leaped over 75 percent. Since then though, his numbers in the Lone Star State have significantly dropped, signing only seven Texans in 2016. 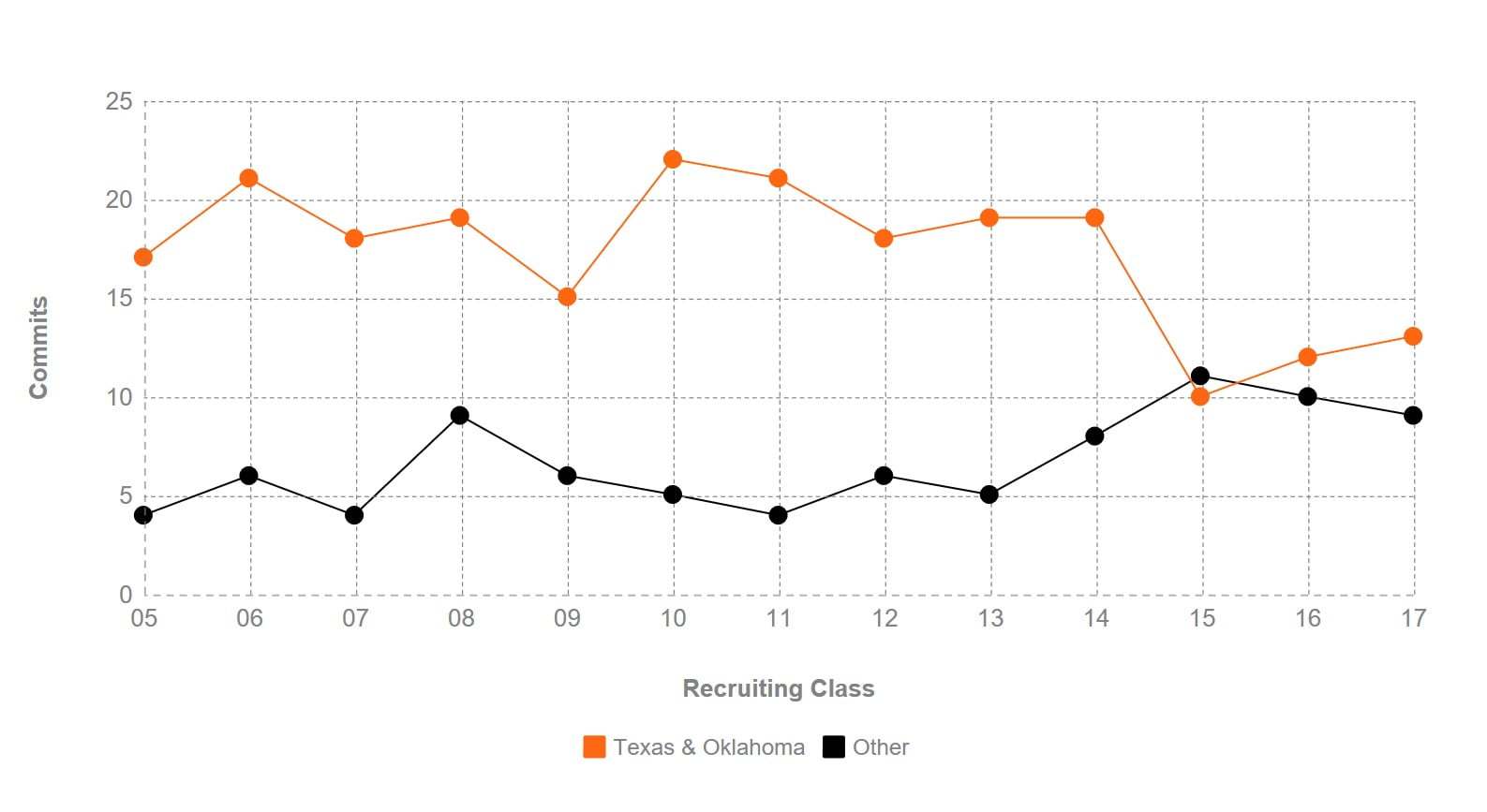 To better understand the reasoning behind the slip in Texas turnover, it’s important to put those numbers in context with the program. In 2011, OSU finished No. 3 in the nation and beat Stanford in the Fiesta Bowl, still probably the most famous win in school history. The recruiting class that followed had six fewer Texans, indicating a drop in dependency and a rise in Gundy’s sphere of influence.

As the brand and culture has grown with more TV exposure, good marketing and the boom of social media, the average number of Texans has plummeted from 15 (2005-14) to a hair over eight in the past three classes.

Inversely, the number of players coming from outside of Texas and Oklahoma, Gundy’s top two honey holes in recruiting, has been bumped up by four more out-of-state athletes per year, from six to 10 in those same intervals.

“Recruiting is still a people’s business even though it’s changed considerably, and it’s getting ready to change even more,” Gundy said, and there is certainly evidence of that.

In 2017 alone, OSU signed players from Utah, Michigan, Illinois, California, two from Tennessee, two from Georgia and one, a world champion sprinter, from Canada.

Some of those stories fall back on the business of recruiting, like Fua Leilua who was Gundy’s fourth signing out of Snow College outside of Salt Lake City, but many of them aren’t. J.D. King is an easy case study at the spread of the Gundy Effect on America.

King was a touted running back coming out of Fitzgerald High School in southern Georgia. That’s more than 1,000 miles away from the Stillwater campus, but OSU made the trip, and that was wise. King ended up holding 14 scholarship offers after National Signing Day from the likes of OSU, NC State, Minnesota and Cincinnati. He also had nine offers from SEC states.

Point being, it was strange for him to commit to any university in Oklahoma. Of course it has paid off, earning the No. 2 spot behind Justice Hill, but still an oddity in the Gundy era.

Georgia is Gundy’s most fruitful pipeline state outside of Texas and Oklahoma. Although many Georgian players indirectly make their way to OSU through junior colleges, like Chris Carson in 2015 or Tyreek Hill the year before, some have made the straight jump. King is the most obvious recent example, but Jelani Woods did it, too. So did Kirk Tucker, Naim Mustafaa and the Curry brothers.

Gundy’s history in the state runs well into his history. In 2006 he snagged Dantrell Savage out of a two-year school. In 2008, Beau Johnson came from Butler Community College, and Maurice Gray did the same thing.

Gundy’s roots can be broken down to a micro scale.

Assistant coaches like cornerbacks coach Tim Duffie have made a name for themselves in particular regions of different states. Duffie is a mogul in D/FW. Joe DeForest used to run Houston, and offensive line coach Josh Henson has already proven able to recruit to the north.

Some areas have become more popular than others. The major cities near Stillwater are obviously big in the master web of OSU’s recruiting, but places like south central Oklahoma and east Texas in particular have become spots of interest on the map for the Cowboys. 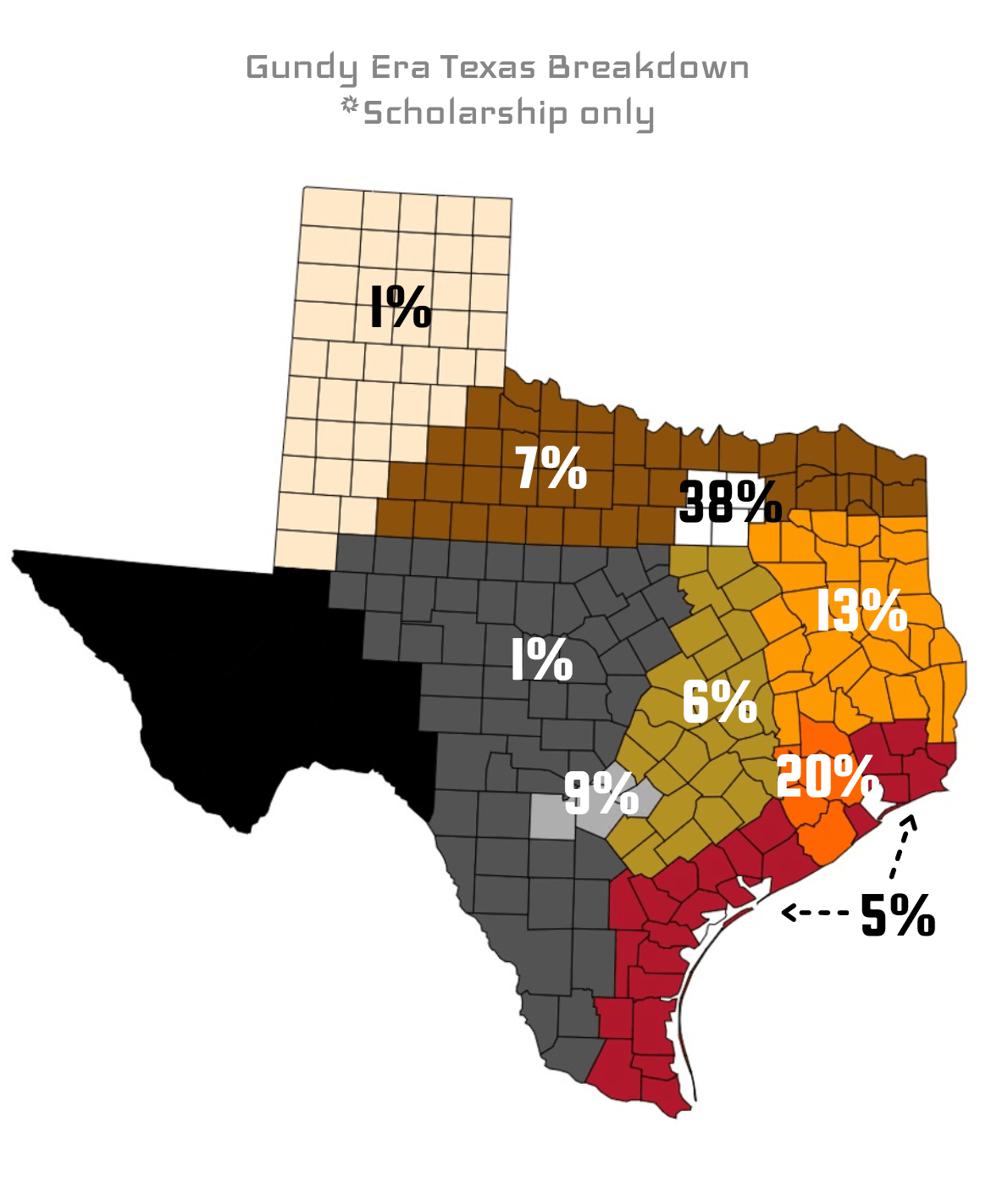 The 2007 recruiting class got the snowball rolling in the small cities of east Texas.

Skyscrapers are traded for pine trees and farmlands only a few hours outside of D/FW, but landing Kendall Hunter from John Tyler High School and Dez Bryant out of Lufkin were like industrializing an entire sector of the state from the OSU perspective.

Both went on to become All-Americans in Stillwater, and Gundy kept onto John Tyler, coming back for O-lineman Gerron Anthony and defensive end Eric Davis over the following half decade.

More than anything though, Hunter and Bryant spawned the bEAST Texas movement. Cowboy Backs coach Jason McEndoo has been tasked with manning the region since he was hired in early 2015, and he has returned to OSU with success, especially in the 2017 recruiting class.

In the same way there are hot spots, there are cold ones.

Gundy has earned zero signatures from the entirety of western Oklahoma and left arm of Texas. There have been a handful from the Texas panhandle and only three from the central plains part of the state, making up about 150 total counties. That’s three percent of a recruit per county over 13 possible years.

Fairly remarkable that even with Texas cities like Amarillo, El Paso, Midland and Lubbock, and Oklahoma towns like Lawton, Altus and Woodward, Gundy and his staff have pulled 74 athletes from five small counties in North Texas.

But maybe not. At DeSoto High School south of Dallas, coach Todd Peterman cited how easy it is for a coach to go from Lancaster to DeSoto to Duncanville to South Oak Cliff high schools in less than an hour and find at least four different recruits worthy of a scholarship offer. And that’s just one molecule of the metropolis.

J.W. Walsh, former OSU quarterback and current running backs coach at Abilene Christian, said as a coach, hitting “at least more than five” schools in a day is completely possible average to reach. Also, he said he felt like going to Denton Guyer gave him a leg up on someone from an hour west because of the ease of exposure, even in the days of Hudl and 247 Sports that try to level the playing field in that regard.

Walsh’s dad is still the coach at Guyer and said one drawback to living, playing and coaching in D/FW is the cookie-cutter recruiter. With assistant coaches going to so many different schools in one day, they start to give you the same generic speech they gave at the last high school, Walsh said.

OSU isn’t like that, Walsh said. They’re passionate, honest and transparent, and before I could finish asking whether that was common among Division I programs, he answered.

Walsh said he tries to quiz coaches on their backgrounds to try to gauge the longevity of a program. With the nature of college football, assistants and coordinators are considered relics if they stick around for more than a couple of years. On Gundy’s staff, all but one assistant has been at OSU for more than three.

That goes a long way when you have to come back to the same schools year after year, he said.

“I like seeing the face and know that it’s Oklahoma State instead of having to look at his shirt real quick,” Walsh said.

OSU is a brand that is starting to compare with the tops in the nation.

Of course if Gundy’s assistants can’t recruit Dallas or Houston, Oklahoma City or Tulsa, they’ll be “out of luck,” but with 44 percent of all signings coming from those four metros, “luck” is maybe even in excess.

There will always be a place for cultural fits, as I’ve written about in this series, like Tuttle and coach Brad Ballard.

Gundy will always seek out farm boys like James Washington in Stamford, Texas, or Cole Walterscheid in Muenster, Texas, while others balk. Innovations in recruiting such as 247 Sports and Hudl have revolutionized all aspects of recruiting and allowed for tiny towns like Forney, Texas, in the east to have two players commit to the same school hours away in the same recruiting class.

But while the Kris McCunes and Brendan Vaughns will always be there in Gundy’s back pocket, he has earned his seat at the table, Ballard said.

“Back in the 80s and 90s, they couldn’t just walk into any school in America and say, ‘We’re gonna make a play on this guy,’” Ballard said. “‘We’re gonna recruit this dude. I don’t care if LSU or USC or Alabama is recruiting him. We want him, and we’re gonna make a run at him.’

“I don’t think they’re there anymore. I think when Oklahoma State comes to talk to you as a recruit now, you better listen. They’re doing it as good as anyone.”