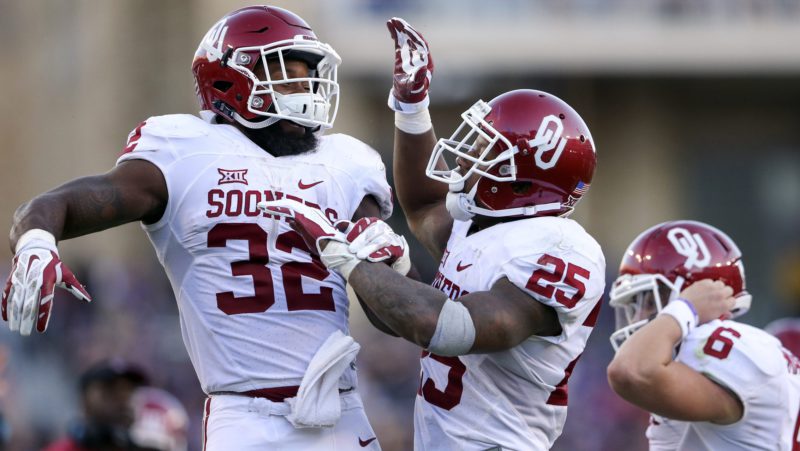 There are about to be a bunch of U-haul rentals scheduled in Norman, Oklahoma. Joe Mixon declared for the NFL Draft on Thursday.

Mixon of course has been at the center of controversy ever since he punched Mia Molitor his freshman year in Norman. That incident recently re-surfaced as video was released. Some people thought that might keep Mixon in Norman, but he told Jake Trotter of ESPN that he got a first-round grade for the NFL Draft and Bob Stoops’ stamp of approval.

“He said, ‘Just keep being the person you are — you’re a great person. Keep your head straight,'” Mixon said. “Basically, that I’ll have a great career in the NFL.”

Dede Westbrook has exhausted his eligibility and is leaving OU after his Biletnikoff-winning season as well. All-time Oklahoma rusher Samaje Perine is going too.

Those three players had a hand in 284 of the 571 points scored by the Big 12 champs. They are also losing Penn State transfer Geno Lewis and Jarvin Baxter at wide out. The Sooners’ most experienced returning receiver will be tight end Mark Andrews. Their most experienced running back will be Abdul Adams who had all of 283 yards in 2016.

So what does that mean for the Sooners’ 2017 prospects — and those of the rest of the league, for that matter? Who knows. They’re probably still the favorite, but Mixon’s exit leaves a lot of questions.

Conversely, Oklahoma State returns their best playmaker in James Washington and one of the top quarterbacks in the nation in Mason Rudolph and about six receivers who could start for about half the teams in the Big 12. Let’s not forget budding star and Freshman All-American, Justice Hill at running back.

The Cowboys are stacked on offense and retooling on defense, but have plenty of depth there too — especially up front. So who else might make a bid to dethrone Oklahoma?

TCU seems to be slipping. Texas Tech will regress even further with the departure of Patrick Mahomes. We will have to see what Will Grier can accomplish at West Virginia. Kansas State represented the conference well in a Texas Bowl win over Texas A&M, but I don’t know if I’d expect them to contend for a title.

Iowa State doesn’t do much for me and Texas is an unknown. (How quickly can Tom Herman turn things around?) And Baylor is in step 2 of a 100-step rebuild.

Oklahoma may still be the favorite for a lot of people. (I don’t know if you’ve forgotten but they have a pretty good QB themselves). But the loss of that type of firepower definitely makes things more interesting for several other squads.