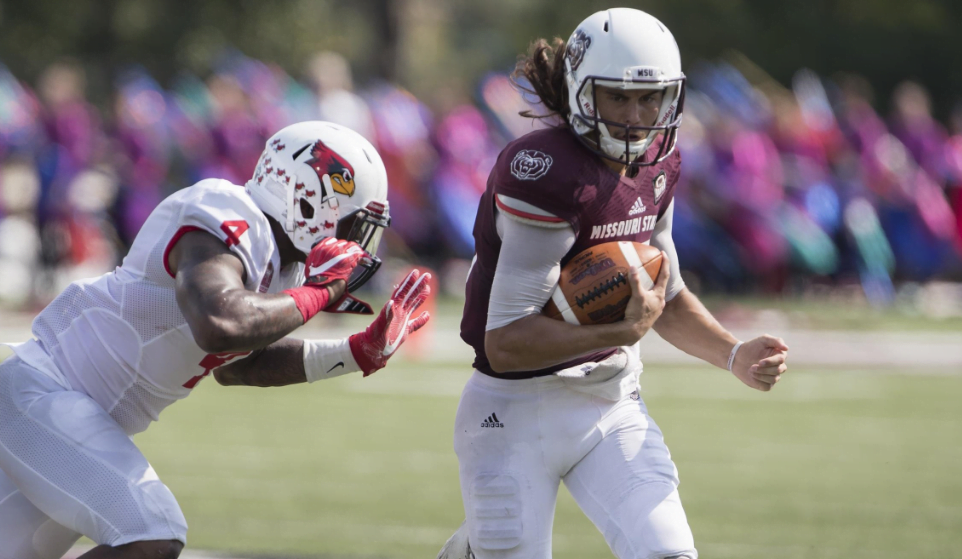 Yesterday, I covered the five things you need to know about Oklahoma State’s upcoming opponent Missouri State. Today I wanted to dive a little deeper and look at the four key players, two on each side of the ball, to watch for on this Bears squad as they roll into Stillwater on Thursday.

Let’s start with the offense.

After leading Garden City CC to an NJCAA national championship as a freshman, Huslig decided to transfer to Missouri State. Last season, his first with the Bears, he threw for 1,981 yards and 9 touchdowns and tacked on another 621 yards on the ground and 4 more scores. These yardage totals led the team in both categories.

If the Bears want to have any chance at winning this game, Huslig will have to have an all-time performance. In the 2017 season opener against the Missouri Tigers, Huslig had a pretty solid showing throwing for 353 yards and 2 touchdowns along with 1 more touchdown on the ground. He did throw 1 interception, but overall was pretty accurate with a completion percentage of 68.6. The junior quarterback will most likely need an even better showing than last year’s debut if MSU wants to come out on top in Stillwater this Thursday.

One issue I did notice with Huslig in watching some Missouri State film from last season is he tends to stare down his primary receiver. The Bears’ offense uses a lot of RPOs, which means Huslig would be trying to get the ball quickly to his primary target, but even on drop backs I never really saw him go through any progression. His tendency to lock on to his main target led to 11 interceptions during his 2017 campaign.

The Cowboys will need to get in Huslig’s face early and not allow him to get into a rhythm like he did against Missouri last season. I think Jim Knowles’ aggressive style and the talent the Cowboys have up front will result in a tough day for the Bears QB1.

Thomas and his 184 yards in 2017 is the most returning production by any receiver on this year’s roster. The Bears lost several of their top receiving targets from a year ago, and Huslig is looking for someone to step in and fill the role of his former go-to guy Malik Earl.

Through fall camp, Thomas has appeared up to this task. He apparently was Huslig’s favorite target, and his length and body control make him a perfect outlet on third and long.

His size makes him tough to defend, so it will be a decent early season test for this Cowboy secondary. To stop Huslig from getting into a rhythm, OSU will need to keep the ball out of No. 84’s hands.

Garbutt was a three-star recruit coming out of high school who started his college career with the Iowa Hawkeyes. He only saw action in three games with Iowa before transferring to Missouri State in 2017. In his first season with the Bears, he recorded a team leading 85 total tackles, 6.5 tackles for loss, 5 quarterback hurries, 2 sacks and 1 forced fumble from the linebacker position. His play last season earned him Honorable Mention All-Missouri Valley Football Conference recognition.

People are expecting big things from Garbutt again this season as he was a first-team All-MVFC preseason pick. Garbutt is probably the best all-around player on this Bears’ defense and wherever the ball is, you can expect him to be.

Garbutt will be starting at the Sam linebacker spot on Thursday, and he will be looking to slow down Justice Hill and the Cowboy running game, along with putting pressure on Cowboy quarterback Taylor Cornelius.

Missouri State did have another All-MVFC preseason pick in cornerback Darius Joseph, but I think the real key for the Bears in this week’s game will be the defensive line. Along with Huslig having an all-time performance on offense, the MSU defensive line will have to have a similar outing if the they want to have any shot at the upset.

Taylor Cornelius will be making his first career start on Thursday, and even though he seems ready for the spotlight, if the Bears can pressure him into a few early mistakes, they could get inside his head. One key piece in accomplishing this goal will be sophomore right end Eric Johnson.

Johnson played behind Colby Isbell last season, but still saw action in eleven games as a freshman. During that time, he recorded 18 total tackles, 3 of them being for a loss, and 4 quarterback hurries, which ranked second on the team behind Garbutt.

Missouri State’s head coach Dave Steckel has coached his share of talented pass rushers, including former Pro Bowler Aldon Smith at Missouri, so I think Johnson is in the right hands to have a solid career in the FCS. I believe the Cowboy offensive line will be able to handle the Bears’ defensive front, but Johnson and company might be a tougher test than one would think from an early season FCS opponent like Missouri State.