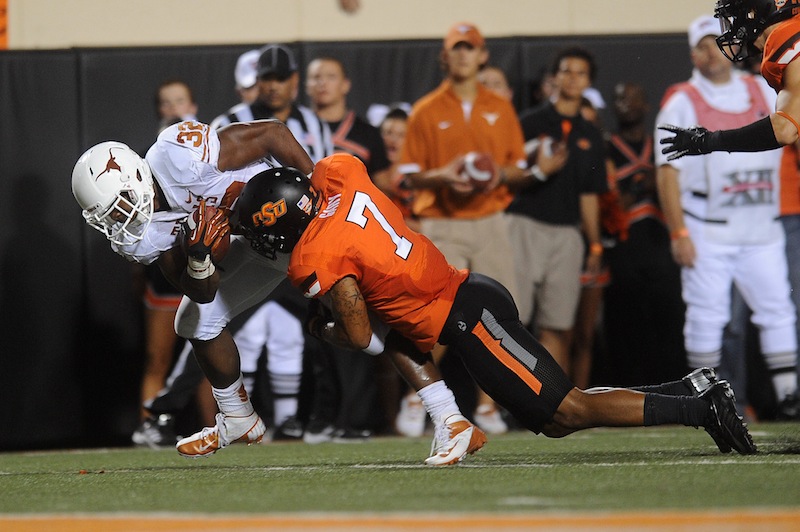 There’s some new information on the Shamiel Gary starving his dogs case that was originally reported on Tuesday.

Gary was accused by a neighbor of neglecting and starving his dogs, a claim he adamantly refuted. That’s where we left the story on Tuesday, the O’Colly fills us in from there:

OSU Director of Communications Gary Shutt said Wednesday that Gary took his dogs to a veterinarian, who declared them both healthy, but also said one of the dogs needed to put on about 10 pounds of weight.

“(The vet) provided the dog some medicine and asked Shamiel to bring the dog back in 10 days,” he said. “The vet also recommended a larger dog house for the two dogs. Shamiel showed the vet’s documentation to animal welfare and they were satisfied.”

The accuser (Lauren Brush) has hit up every news outlet she can find (besides PFB) but it looks like Gary is in the clear:

Stillwater Police Capt. Randy Dickerson said Tuesday that animal control was investigating the claims Brush made. He did not confirm Gary was a suspect but said animal control spoke with someone that day about the allegations. On Thursday morning, Dickerson said the case seems on its way to being resolved.

“The owner of the dogs did voluntarily take the dogs to the vet the day before we were able to talk with him,” he said. “When we contacted him he supplied that info and we talked to the vet.”

As of Thursday afternoon, no one has been charged with a crime in Payne County District Court.

One dog is being treated for an underlying condition not due to neglect and the other was determined to be healthy, a Stillwater police spokesman said.

And finally, News9 is reporting that an Oklahoma City vet said the animals don’t look healthy:

However, an Oklahoma City Veterinarian we sent photos of the dogs to says they both appear underweight.

I admit that I didn’t think this story would have a positive ending, and maybe it won’t in the end[1. It does feel like there’s a bit more to the story, no?], but everyone that jumped down Gary’s throat earlier this week (myself included) appears to be wrong.

The dogs were given a clean bill of health — though I’m not sure how a rational person could look at those photos and think “healthy,” but this is why I’m a blogger and not a vet — and all is well again in Stillwater.

For now…until something else arises.