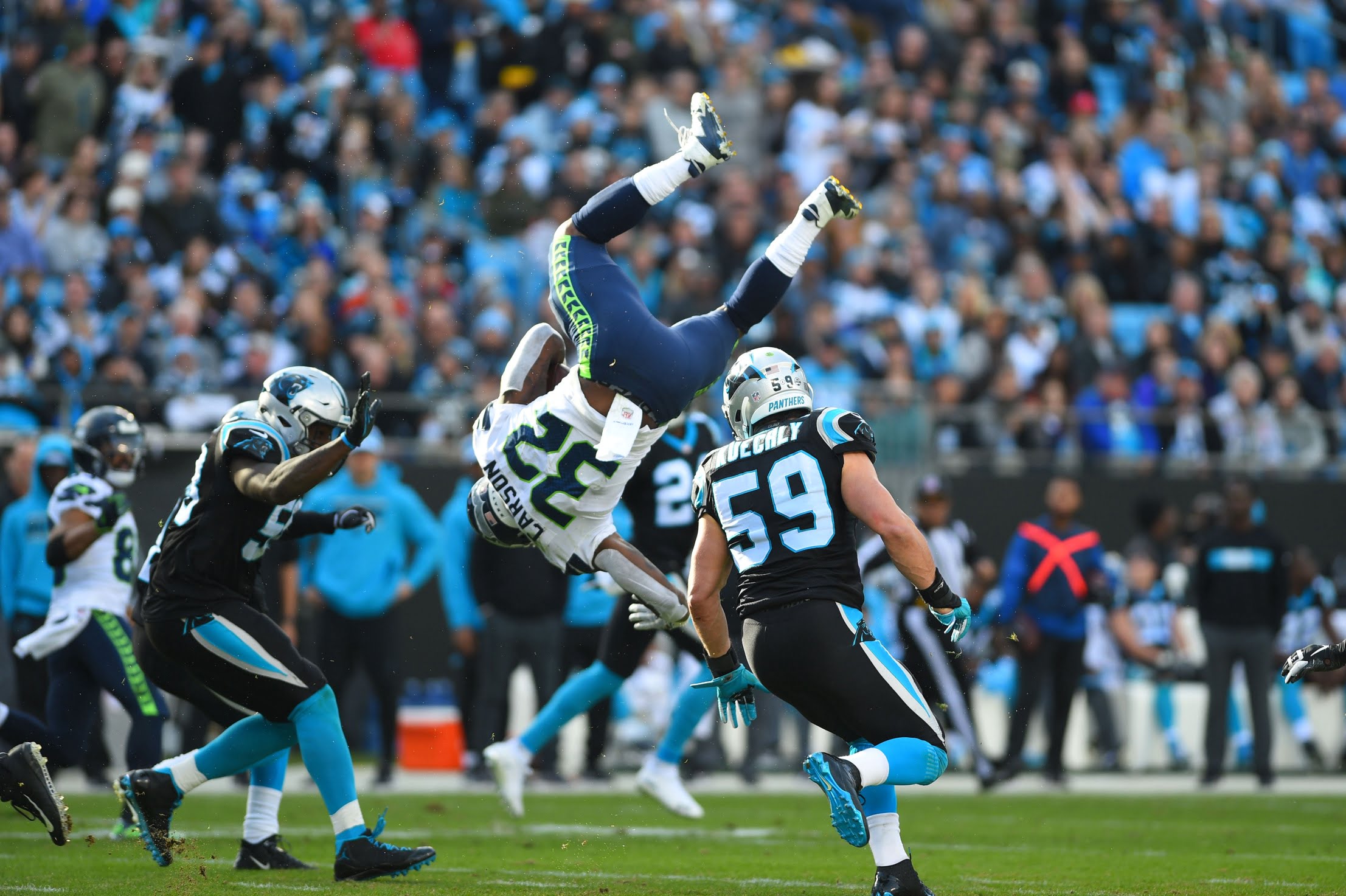 The Thanksgiving holiday kicked off an up-and-down week for former Pokes in the NFL. It was full of binge-worthy highlights and rookie success stories, as well as an injury and a couple head-scratching realizations.

Let’s start with the flip the filled your timelines.

To go along with his hard-earned 55 yards and a touchdown against a tough Panthers rushing defense, Chris Carson landed an impromptu somersault that set Twitter ablaze.

“I don’t know. That was out of this world,” said Pete Carroll. “All of us said we’ve never seen that happen before. Maybe it has somewhere, but I’ve never seen a guy flip, land on his feet and make some more yards.

“That was extraordinary. I don’t think that will happen again, but maybe it will. Who knows?”

“First of all, I thought he was going to leap on me,” said Wilson. “He almost did, the guy barely got him and then he landed. It was pretty good. I would give him a 9 out of 10. He almost broke out again.”

But Carson’s biggest fan was apparently not to high on his hurdle.

Chris Carson heard from his mom after he hurdled a defender and did a somersault when he got upended in mid-air. "She told me to stay on the ground," Carson said. "I gave her a heart attack on that jump. So it'll probably be my last time jumping." https://t.co/EzWH9oVrfX

Following his late-game heroics during the Seahawks’ 30-27 win over the Panthers, the rookie cornerback received good marks from his head coach.

“He was a really good all-around football player and he had good sense in open field and made all kinds of hits hitting on receivers and showing his toughness and all of that,” said Carroll. “That was all part of the package we thought we were going to get.”

Not only did he make a game-saving open-field tackle late in the fourth, he made a huge play to save a TD earlier and is now tied for third in the NFL after his pair of forced fumbles.

Good coverage and a timely tackle by Tre Flowers prevents Panthers Christian McCaffrey from getting any nearer to the end zone, Panthers secure a field goal in the last minute to give them a 3 point lead. #Seahawks #SEAvsCAR

Marcell Ateman Comes Down to Earth

During his second start for the banged up Raiders offense, the rookie receiver was targeted a game-high 10 times but only hauled three of those balls for 16 yards. Those three catches were still the most of any Raider.

Ups and downs should be expected with anyone playing in his second career game, especially in an offense this bad. With Jordy Nelson looking clearly hampered with his knee injury and other key players still out, Ateman should have ample opportunities moving forward to improve.

E-Man Takes it Back

Emmanuel Ogbah grabbed only one tackle, but made one of the plays of the game when he scooped up this fumbled snap from Andy Dalton during Cleveland’s 35-20 win over Cincinnati.

Ogbah was called down at the 7-yard line but he gave the ball to Baker Mayfield who threw a TD pass two plays later to cement the rout in Cincinnati.

The rookie wideout was unable to connect on any of his three targets from Ben Roethlisberger during the Steelers’ 24-17 loss to the Broncos. It was the fifth game in 10 that the rookie has not caught a pass.

I know a guy who can hit Washington between the numbers on deep balls. ? pic.twitter.com/ckCw6g1h7u

All jokes aside, last year’s Biletnikoff winner has had a disappointing season so far. He was always going to start out behind the likes of Antonio Brown and JuJu Smith-Schuster in touches, but Washington hasn’t made the most of the targets he’s gotten.

James Washington has caught 8 of the 25 balls that were targeted to him this season.
That 32.0% catch percentage is worst in the NFL for any player with at least 11 targets, per @PFF.

What’s worse, it appears that Ryan Switzer, who the Steelers picked up mainly as a returner, is edging the rookie out of his assumed No. 3 WR role.

And he is just now fully grasping the offense. Remember, Switzer was acquired in August. Washington was drafted in April. The rookie had a three-month lead and still looks woefully out of sorts in Randy Fichtner’s offense, and at this point, it’s fair to wonder how many more chances he is going to have to rectify that. [247 Sports]

Washington saw the field for just 18 snaps on offense, coming off the bench after starting the previous two games. Switzer caught six of eight targets for 67 yards while seeing the field during 52 offensive plays.

Offensive linemen rarely get the pub they deserve, but Russell Okung should get some for his contributions to the Chargers offense. When he started protecting Philip Rivers’ blind side last season, he made an instant impact. Now in Year 2, the Chargers are poised to make the postseason on the heels of a career year from their veteran QB.

On Sunday, Rivers set an NFL record in completion percentage (96.7 percent) completing 28 of 29 passes for 259 yards, three TDs and no interceptions. His 25-straight completed passes to start the game is also an NFL record.

#Vikings HC Mike Zimmer tells Michelle Tafoya that he'll be forced to go for it on 4th down in the second half to avoid putting the game in the hands of K Dan Bailey. Bailey went 0-2 in the first half.

To Bailey’s credit, those misses were from 48 and 56 years, respectively. But the long ball which was formerly his calling card, hasn’t been there consistently since returning from a groin injury last year that saw him miss the first games of his career. The lack of confidence from his head coach is hard to stomach for the former Pro Bowl kicker. Bailey did hit his 38-yard attempt in the waning minutes of the fourth quarter to push the Vikings’ lead to 24-17 over the Packers.

The injury of Geoff Swain afforded Jarwin a career-high 35 snaps on offense (50 percent) during the Cowboys’ 31-23 win over the rival Redskins on Thanksgiving, and the second-year tight end paid it off.

Not only did he catch both of his targets for a career-high 25 yards he did the dirty work as well, clearing the path for this big Dak Prescott run.

Wonder if Norman has recovered from Blake Jarwin stealing his lunch money. pic.twitter.com/Af7GJmQYYO

• Lane Taylor left the Packers’ 24-17 loss with a quadriceps injury and did not return. His status is unclear for Week 13.

• Vincent Taylor is done for the year with injury for the second time in his early career, but he put enough on tape to give Dolphins fans something to look forward to next year.

That's the 2nd-best rate by an NFL defensive tackle in that period (min. 200 snaps).

• Tyler Patmon appeared in just 17 snaps on special teams during the Jaguars’ seventh-straight loss on Sunday. They fell 24-21 to the Bills.