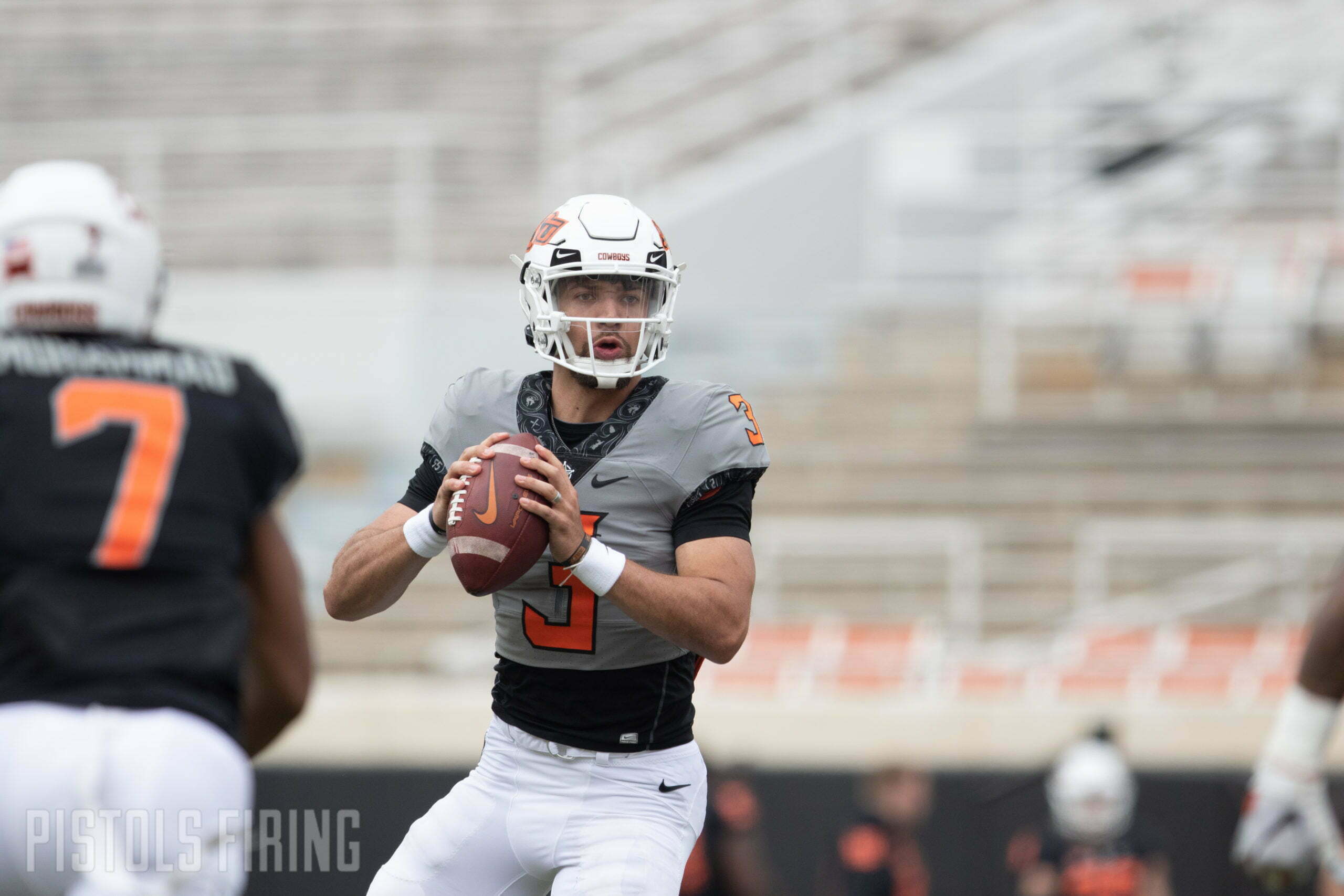 STILLWATER — The Cowboys might’ve not played a game Saturday, but there were still a few takeaways from the spring finale festivities.

Gordon, Shettron Go Down with Injuries

Not 10 minutes into the 11-on-11 portion of OSU’s practice, Ollie Gordon was on his back on the Boone Pickens Stadium turf and in some pain.

Gordon has turned into a bit of a cult hero among OSU fans since getting on campus this spring. He is a massive running back at 6-foot-1, 211 pounds, and he was a highly touted get for the Pokes, being a four-star prospect. But when he was down, the life got sucked out of the stadium.

Gordon went into the bowels of the stadium before returning to the sideline with his arm in a sling. It sounds like Gordon is going to be OK.

“Ollie had a little, what we call, just a mild little shoulder,” OSU coach Mike Gundy said. “If it was a game, we would’ve put him back in, but we’re not gonna do that in the spring. He’s had a good spring. He’s showing signs of progressing, but he’s a long ways off. He’s just a high school kid.”

But Gordon wasn’t the only early enrollee darling to leave injured. Talyn Shettron, who had a great day, limped off after taking to the skies to bring down a Gunnar Gundy pass. Later in the practice, someone brought Shettron a scooter to roll around on. After the practice, Gundy said he would guess Shettron would be fine.

How the QBs Performed

With it being a practice, there weren’t a ton of hard stats to be able to follow.

Most of the latter half of the day involved the Cowboys going from 11-on-11 to 7-on-7. No matter the result of the play, the ball would get moved up to a predetermined position. Keeping yards was tough with that, but here is a breakdown of how those QBs did in terms of completions (with 7-on-7 and 11-on-11 combined).

It’s important to not jump to too many conclusions in this. This is one day of practice where Spencer Sanders was, more often than not, going against much stiffer competition than the rest. Sanders also had a rushing TD on a late drive, and his second pick hit Brennan Presley in the stomach before popping into Lyrik Rawls’ hands.

Gundy’s INT also squirted through a receiver’s hands. Gundy had a few good balls. He hit Talyn Shettron on a sideline in one of his first series. Gundy and Shettron connected again across the middle on the play Shettron got hurt on.

Rangel’s touchdown went to CJ Tate. Rangel did a good job of looking off the safety before ripping it down the sideline to the streaking Tate. It should also be noted that Rangel went through a series of 7-on-7 that I was unable to track while going from the press box to down on the field.

Sanders’ passing score was a perfectly placed ball to Jaden Bray in the corner of the end zone.

OSU’s spring finale was a spring practice because of offensive line depth, and that showed Saturday.

The Cowboys started the day with nine offensive linemen suited up. Of that group, two were walk-ons and Preston Wilson was noncontact. Wilson, who has transitioned to center, snapped during 7-on-7 but didn’t get any 11-on-11 work. Eli Russ also went down late in the day and had to be helped off the field.

Despite the thinness of the group Saturday, Gundy insists it won’t be that way in the fall as guys come in and others return from rehabbing injuries.

“We’ll have 25 offensive linemen in August, so we’ll be able to practice three groups full speed,” Gundy said. “I keep track of all that, the analytic part of what we missed. So, we’ll make up for that in August. My right off hand thinking is we’re gonna have to get into more contact, 11-on-11, a week earlier than we did this spring because of what we lost based on not having enough guys this spring.”