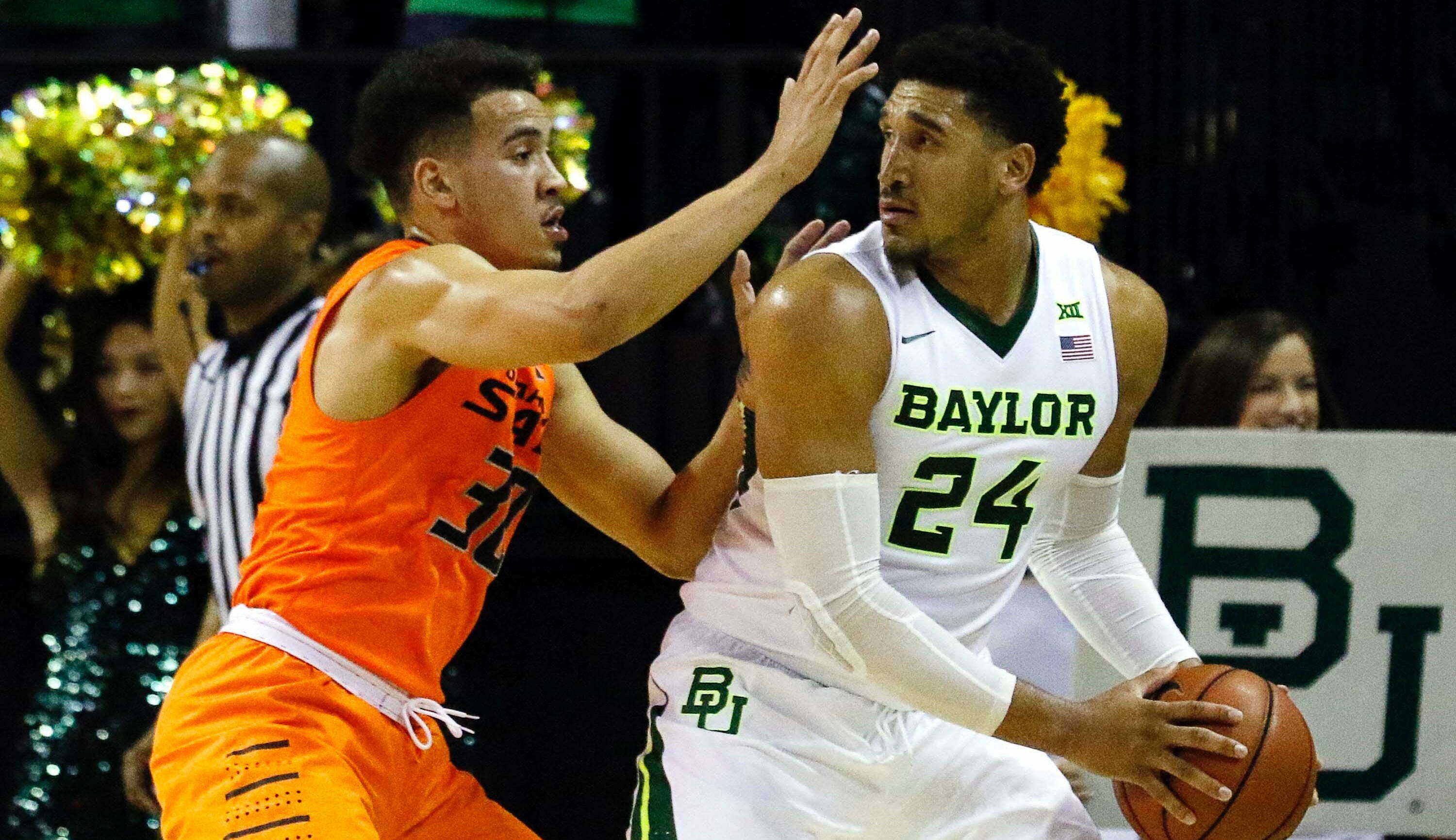 Oklahoma State lost to Baylor on Saturday in Waco 61-57 touching off a two-game sweep in the state of Texas. Sam Aldrich wrote a great instant recap. Here’s my notebook on the game.

• I love the transition 3s from Oklahoma State. Jeffrey Carroll spreading the wing on a fast break to hit a three is really pretty.

• Johnathan Motley, my goodness, he is a dude. I checked three 2017 mock NBA Drafts. Two of three had him going in the first round.

• Baylor’s only white guy described as “gym rat” and “loves to play the game” within 45 second of entering. Automatic. Collect your 1-10 bet in Vegas.

• Cam McGriff getting OSU extra shots on offense. What he does is invaluable. Plus he had the only body on OSU’s side that could match up with Motley and some of Baylor’s other dudes. He was incredible in short spurts on Saturday.

• This is cool. Mike Gundy (obviously) doesn’t need to do it, but it’s fun to see coaches jump in the student section.

• OSU led at the 9-minute mark 16-15 while shooting 29 percent. The reason? The Pokes were out-offensive rebounding Baylor 7-1.

• I love Thomas Dziagaw. Really, I do. I’m also not sure if he’s athletic enough to successfully play in the Big 12 right now.

• Baylor taking over as the No. 1 team in the country reminded me of the 1992 season when Duke lost and Oklahoma State would have been No. 1 in the new poll … and promptly lost to Nebraska. I think Eric Piatkowski was on that team.

• Jawun Evans getting in foul trouble early didn’t kill OSU because Brandon Averette played pretty well, but OSU needs Jawun to be smarter than that.

• Cam McGriff is going to get more “I have no idea how strong my body is” fouls than anyone else on this roster over the next four years. Probably as many as everybody else combined.

• I don’t know if I’m still reeling from the Longhorn Network announcers on Wednesday, but I thought the ESPN guys on Saturday were terrific.

• Phil, are you serious?

• Jeffrey Carroll was terrific again. This play was awesome.

• One of the things I love about Carroll is that he doesn’t settle. At the 2-minute mark in the first half, he had an open 3-pointer that he passed up. He drove to the lane instead and got fouled on a runner. Got to the line. That is the antithesis of the Ford Era and something I hope we see a lot more of going forward.

• Pokes shot 35 percent from the field and didn’t have Jawun for 13 of 20 minutes and led Baylor by five at the half. That’s astounding. The reason is that they won the offensive board battle 9-2 and took seven more shots than the Bears. Undie ball!

• This is great tweetin’.

Scott Drew wearing his suit jacket is a bigger upset than #okstate winning.

• Mark Cooper had this note in a Tulsa World article today.

The latter was the problem for the Cowboys on Wednesday. When the opportunity to finish a play in transition dissipated, the Cowboys still took contested, quick shots.

Going back to hoop-math.com, Oklahoma State took 46 of its 61 shots in non-transition situations. Of those 46, 34 were either 2-point jumpers or 3-point attempts.

It felt like OSU got a lot more transition buckets on Saturday (until the end of the game, of course).

• How many years (approximately) has Ishmail Wainright been at Baylor. Over/under since the Dave Bliss era?

• Jawun needed to start playing like the best player in the gym after Baylor’s run to open the second half. He did for a bit then faltered again. Him and Leyton Hammonds combined to shoot 5/25 from the field. Not great!

• Evans has perfected the “I’ve just been shot” move on the bump in transition. That’s a NBA staple. He also doesn’t do it in a way that’s infuriating (like Marcus Smart).

• Oklahoma State is such a different team when Forte is hitting shots. More hard-hitting analysis there. Speaking of Forte, him hitting 600 shots a day is the new “him and Smart are besties and played high school together.” Every. Single. Broadcast.

When you can't remember if you left the stove on and your wife just texted you from the bleachers. pic.twitter.com/SsjaDWRGon

• My wife thinks I’m terrible at this game, but the Lecomte kid for Baylor looked like Cezar Guerrero (aka the Mexican Assassain).

• OSU took 16 more shots than Baylor and won the offensive rebounding battle 19-7. I bet it doesn’t lose another game in the Undie era with numbers like that. It’s pretty astounding that it lost this one, really.

• The pace of the game was terrific. Certainly a lot better than most Big 12 games I’ve watched. There was a lot of chatter about the refs on Twitter, but I thought they were pretty solid all night. Only complaint was the weak call on Forte with under a minute. Other than that, I thought there were some really good no-calls. Let ’em play!

Mine eyes have seen the glory. pic.twitter.com/5t7azTVfS9

• West Virginia is better than Baylor. Obviously. Just wanted to throw that out there.

• Mitch Solomon’s vertical, what is it? Love the effort, but he just can’t compete against the monsters on Baylor, West Virginia, Kansas etc.

• We had a fun debate tonight in Slack about whether the Big 12 was the SEC of basketball. Kansas is Alabama?

• Brandon Averette can play in this league. Not really breaking news there, but he held his own when Evans was out. And the OSU offense at times looked better with No. 1 on the bench (though I don’t think that’s a Ewing Theory situation).

• How sick of Phil Forte do you think opposing fan bases are? I mean Kansas has to be just beating its breast and clubbing things with sticks over the fact that Forte has another two (or more) games against the Jayhawks. Speaking of: Did you know Forte’s single-best 3-point performance of his career came at KU (seven of them). Believe that was the Smart backflip game.

The guy in the middle. ??? pic.twitter.com/1pDFQAKgMl

• Forte hit five threes on Saturday which means he now has 282. He’s ahead of Randy Rutherford for second now and just 17 shy of Keiton Page’s record of 299. He also became just the 14th player with over 1,500 points in his career in Stillwater.

Phil from his home town of Flower Mound. https://t.co/WOPZH5I5pV

• OSU fell to 9-15 all-time against team ranked No. 2 or better in the AP Poll. They are 0-4 against ranked teams this season.

• The Cowboys fell to 0-3 in conference play for the first time since 1996 (when the conference was the Big 8).