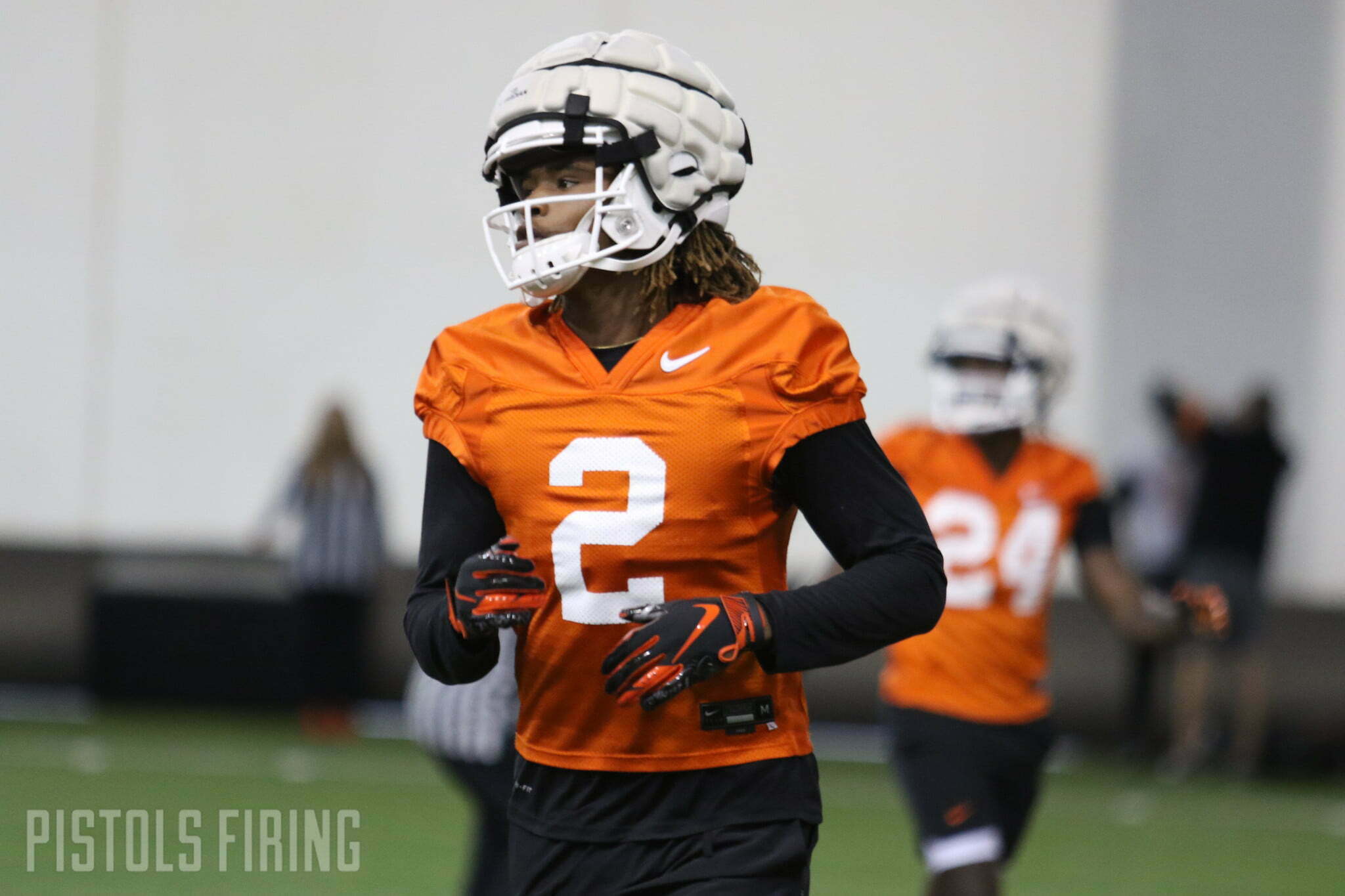 STILLWATER — The Cowboys’ road back to AT&T Stadium started Tuesday.

Oklahoma State had spring practice No. 1 Tuesday at the Sherman Smith Training Center. Here are a couple of quick-hitters from Day 1.

The Cowboys’ 2022 class was a fun one in terms of skill players, and OSU senior quarterback Spencer Sanders seems excited about some of his new gadgets.

Talyn Shettron is one of the highest-rated signees in program history. A 6-foot-2, 195-pound receiver from Edmond Santa Fe, Shettron had offers to play at Oklahoma, Texas, Notre Dame, Texas A&M, Miami and others. He was initially committed to play for the Sooners until pulling off a Bedlam flip last June.

“Speed, height, jump, quickness, route running, I mean everything,” Sanders said of Shettron. “He’s got the full package once he gets [his mind] with the playbook. I think he’ll be pretty good.”

Then there’s running back Ollie Gordon. Listed at 6-foot-1, 211 pounds, Gordon is already a big dude as an early enrollee. He ran for 2,478 yards and 35 touchdowns as a high school senior, choosing Oklahoma State over offers from Texas, Michigan, Arkansas and others.

“That’s the tallest running back I’ve been around since I’ve been here,” Sanders said. “To me, he’s pretty big. I’m just excited. With the young guys, I want to watch and see them grow and see how he plays and how he does and then just watching them develop over the years.”

There will be a lot of hype around OSU’s young group of receivers entering 2022, but a seasoned vet has somewhat silently made a return.

Braydon Johnson played in just one game last season before missing the remainder of the year with an unspecified condition. A 6-foot, 205-pound speedster, Johnson has played on the perimeter and in the slot entering his super senior season in 2022. On his career, he has 748 receiving yards to go with five touchdowns.

A lot of eyes will be on guys like Brennan Presley, Jaden Bray, Blaine Green, Bryson Green, John Paul Richardson and Talyn Shettron, but if Johnson can get back to being the weapon he has been in flashes, he can be a real difference maker.

“Well he needs to play — you know, when he got injured, he was a good player,” OSU coach Mike Gundy said. “He’s experienced. He’s caught a lot of passes in bowl games, big games. I think he’s faster now. He looks better than he ever has. He ought to run under 4.4, and he’s made a lot of plays in his career. He should be a leader of that group. I liked his attitude in the offseason, he’s worked extremely hard and I think he’s ready to play.”

When asked who stood out in the weight room this offseason, Korie Black didn’t hesitate with an answer: Trey Rucker.

Rucker, a transfer safety from Wake Forest, primarily played special teams last season with how deep the Cowboys were at his position, but he still had a few highlight-level plays on special teams with thunderous hits. According to Black, Rucker takes that hard-hitting mentality into the weight room.