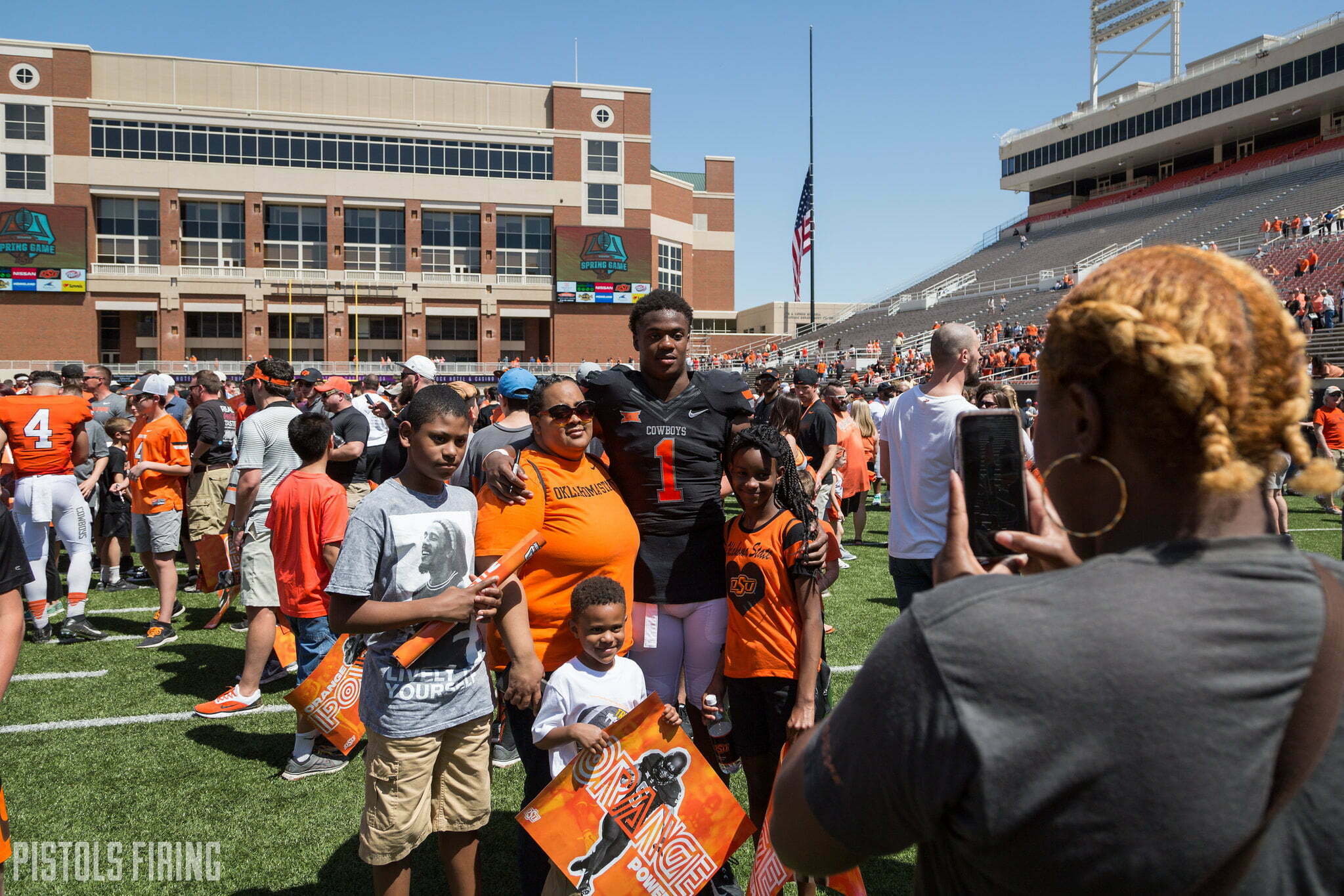 The Cowboys held their weekly media availability Wednesday before Saturday’s spring weekend. Mike Gundy and his coordinators gave updates on OSU’s progress to this point. If you’d like to see full interviews, you can do so here. Here are some of the highlights in written form.

What to expect Saturday

OSU’s annual spring game turned “spring weekend” was a bit of a mystery, but Gundy laid out the itinerary Wednesday.

It’ll be a glorified open practice. It’s set to start at 1 p.m. Saturday, and Gundy said it should last about an hour and a half.

Gundy said the team stretch will begin 1 p.m. and some special teams work and drills will follow. There will be some individual periods.

On of the big talking points will be an extended 7-on-7 period, where fans will get an opportunity so see Dru Brown and Spencer Sanders throw. There will also be some interior drills where fans can see linemen make some contact with each other.

Gundy also said there will be some one-on-one between wide receivers and defensive backs. And during a break for most, there will be a punting exhibition that involves the 29-year-old Australian freshman Tom Hutton, who Gundy has been high on this spring.

Then there will be a 36-play scrimmage, but it apparently won’t be the most authentic scrimmage.

“It’ll be scripted, but it’ll be scripted so we can try to highlight some things I think the crowd would want to see,” Gundy said. “People would ask why are we doing that. The reason we’re doing that is because if we don’t, the defense can somewhat guide what the offense does and the fans might not get to see some of the people touch the ball or plays that we would want to run. So I think that will benefit the crowd more.”

Although that will be scripted, it’ll lead to a live two-minute drill.

“I thought that that would be about what the people would want to see,” Gundy said. “Then they could come down and see the players, get autographs, talk to the players and then go to baseball or whatever it may be.”

With the ongoing quarterback battle between Dru Brown and Spencer Sanders, it can be easy to forget there’s another scholarship quarterback on OSU’s roster — early enrollee Brendan Costello.

Gundy said Costello, who was a three-star prospect out of the highly coveted San Clemente High School, obviously hasn’t gotten the same amount of reps Sanders and Brown have, but he made good on his opportunity in Friday’s scrimmage.

“He hasn’t been out there a lot in the reps,” Gundy said. “He’s not getting that work, but we did work him last Friday, and he played very well. I don’t know what his numbers are, I think he was like 5-of-6 for 120 yards. He played better than you would expect of a high school kid.”

Getting Ahead on Last Season’s Penalty Problem

Gundy is trying to get out in front of that issue this season with numerous officials at each practice.

“Anybody that can officiate and can wear a (striped) shirt, we stood them out there,” Gundy said.

Gundy said he hasn’t done that to this extent before. He said there are repercussions for penalties. Gundy took the blame for not addressing it enough last year, but this year he is doing his part to not let it happen again.

“In my position as coaching, it’s almost like you’ve been married a long time to your wife and you get so far into an argument, and you realize you might as well just quit because nobody’s gonna win in this situation,” Gundy said. “I didn’t do a good enough job in the offseason and preseason of addressing penalties, so once it gets that late, you spend a lot of time on Tuesday or Wednesday chewing on them, and then they worry more about that than they do getting ready for the game. It becomes counterproductive.”