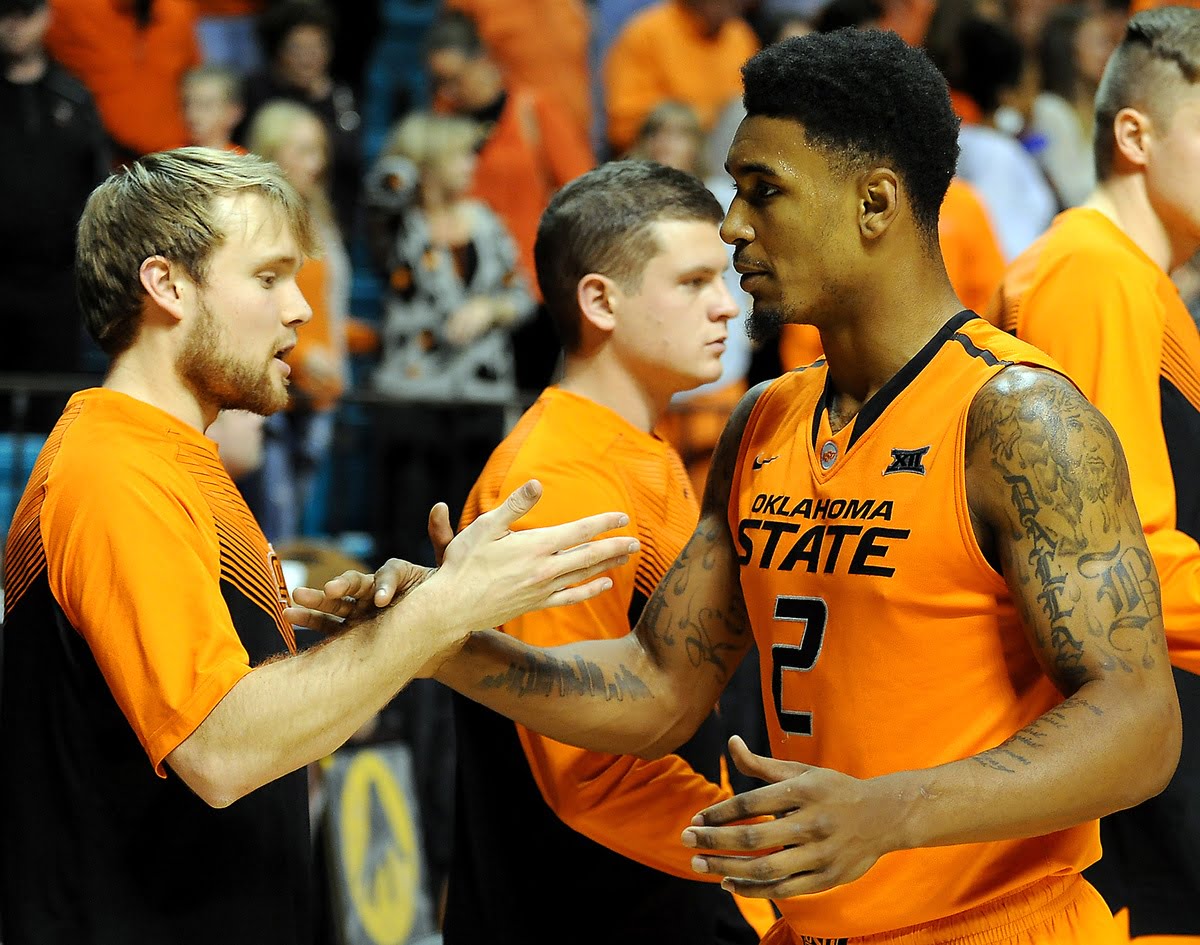 I’m still not sure if OSU is good but they are 6-0 for the second straight season for the first time since World War II. So that’s nice.

The Pokes used a monster first half from Anthony Hickey to take a lead that they would never even come close to relinquishing.

They outscored Tulsa’s Monday opponent (Auburn) in 16 minutes and nine seconds of play on Wednesday which is all kinds of weird.

Hickey finished with 14-5-2-2 and OSU used the last 20 minutes to maintain a 15-point halftime difference throughout the night.

It was the kind of dominating team performance you’d expect from a Big 12 contender in a Thanksgiving week tournament championship game.

That’s been the great thing about OSU thus far. Not just that it has won but that it has won in ways that make you say “wait a second…that translates to Big 12 play…wait are we….is this…how much Ewing Theory are we dealing with here?”

LeBryan Nash chipped in 21 on 8/14 shooting and Phil Forte added 14, three boards and three steals on the night against a defensively feisty Tulsa squad.

OSU is nothing if not exciting on defense and that’s been pretty clear in its first 240 minutes of ball this season. As OKC Dave pointed out the other day OSU is one of the most disruptive teams in college basketball so far.

#okstate gets a steal every 5.6 possessions, 3rd best in college basketball.

It had seven more of them on Wednesday (Hickey and Forte combined for five) and it looks like something that’s going to be a calling card all year.

More notes and quotes from a sleepy Wednesday night.

• I dare somebody to name a worse shot than a long-range two-pointer for Le’Bryan Nash. I think it might be impossible.

• Speaking of Haith — what in the world was he wearing? Did he pick it up at the TU bookstore on his way to the airport?

• OSU does a really good job of flipping defense into offense quickly. That’s not always as easy as it looks and it’s a testament to Anthony Hickey’s greatness on defense.

• Forte is overrated as a shooter[1. Only because of how highly he’s rated.] and underrated as a basketball player. How’s that for a hot take?

• According to KenPom.com this was OSU’s best opponent faced by about 130 spots. It’s also a top 25 defense and OSU made them look silly at times.

• Hickey is such a catalyst. He’s not the best PG in the Big 12 but he might be the one who provides the biggest spark.

• How much money would you pay for Travis Ford to have a mic on every game and that feed be sent to your phone so you could listen? I’m in for $50 a season.

• It feels like, similar to the Marcus Smart Era, if OSU’s PG is hitting shots in 2014-15 then OSU is going to be a wicked out — especially in GIA.

• What’s the over/under on Nash threes taken this season? What if I set it at 10.5, what are you taking?

• Speaking of Nash, I wonder where he ranks among all-time OSU players at a singular thing in terms of scoring (i.e. Gottlieb at passing, Desmond at dunking, Big Country at haircutting, etc.) He has to be up there.

• There’s little I detest more than the “down by 17 with two minutes left but gonna call a timeout after a made three because that’s what we’re supposed to do” timeout at the end of games.

• They finished with two.

Tulsa has one assist, and it was from reserve freshman forward Keondre Dew in the first half. Down 63-42 to OSU with eight minutes left.

• Ford took Nash out earlier in this game than he does against D4 opponents in GIA!

• Michael Cobbins got out-rebounded by every starter (including Forte and Hickey) and equaled by two reserves. Astounding.

• I feel like Clip is either going to score 20 or 2 and nothing really between those two extremes.

• OSU is off until next Wednesday when North Texas comes to Stillwater. Roger Franklin will not be in attendance.