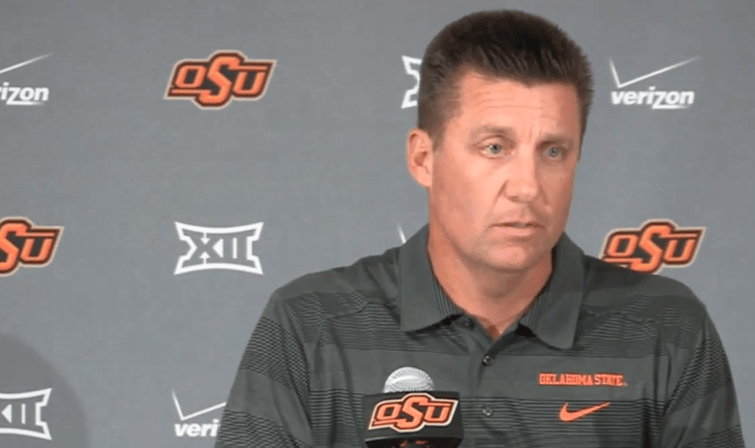 Ok, now let’s see what Coach Gundy has to say. Pretty interesting thoughts on TCU’s offense and defense, our OL, Ben Grogan not really being on special teams, the young guys, the Steel Curtain and pillow fights.

• On TCU: “They’re very good, very fast, well-coached, successful on 3rd downs. Could very well be the best team we’ve played. I don’t know, could compare them with the ‘1st team’ we played.” The “1st team” – so Gundy.

• Robert Allen asked about facing TCU’s several blitz packages: “Percentage-wise, it’s fairly close to where it’s been. It just looks worse because we don’t block them. They show up more and it doesn’t look good when you don’t pick it up. Picking up base looks is our problem.”

• Coach had a great deal to say about Doug Meacham, Trevone Boykin and the TCU coaches: “Doug’s in there and he’s running our system. Feels like spreading people out and allowing him (Boykin, I guess that’s obvious) to be the thrower he is, but then he’s also leading their team in rushing.”

• “Doug’s going to be the next guy that gets a head coaching job.” “Sonny’s a smart guy too. They’re running the same plays we have here.”

• Coach said Boykin is better this season because “it’s not even the same system. Doug’s gone in there and revamped it.”

• In regard to TCU’s defense being down statistically this season: “Two reasons: 1st, the two offenses they’ve played were pretty good. 2nd, when you run the style of offense they run, the defensive statistics go down, because you’re not using the whole clock. You either score fast or you’re off the field fast. It’s very similar to what’s happened here the last 6-7 years.”

Almost sounds like he’s dropping hints about our defense, isn’t it?

• He was asked several questions about the offensive line and their…improvement… “We introduced Mike Wilson last week and got good production out of him.” When asked how Wilson graded out: “He did ok. He’s a long ways from being able to compete at the level we’re used to here. But, for his first shot out of the bag, he wasn’t bad.”

• Then there was this possible all-timer when asked about how the rotation would work if Wilson, Crabtree and Koenig were all healthy: “It’d be a pillow fight. Whoever had rocks in their pillow would win. I can’t really answer that. He (Wilson) played good enough for his first game out but it’s not enough to compete at a high level.”

Wonder if that’s a Connelly technique or if it’s left over from Wick?

• Asked if the OL was frustrated with being described as the “weakest link” in the program right now and what they should do about it. “Stay off the computer, be a good start. There’s not really any way they can avoid it. My suggestion to them is to block better.” …the computer…for some reason that lol’d me.

• He discussed the young guys traveling, being a top 15 team and how they make adjustments: “This team’s been great. They’ve been super. Their focus has been very good. Don’t think they’ve run into fatigue mentally or physically. Looked at our defense Saturday and we had 4-5 freshman out there. So, I just kinda turn away and don’t look – that way I don’t get sick. But they’re fine.”

• On being a top 15 team: “They don’t know. They’re just trying to get to class, take care of their books and everyday life. They’ll be excited about playing TCU but we have to prepare the same way. If we don’t practice and prepare, we can get beat. It’s that way every week for us.”

• On adjustments: “They’ve been great. I went ahead and coached special teams again last week – I’m not coaching it this week. There’s just certain things you do each week to make adjustments and these guys have been really good.” Let’s see…Tyreek for two 90+ TD’s – stay with it, Coach!

• Coach was very complimentary of Seth Jacobs and Josh Furman. On Jacobs: “Guy’s playing hard. We’re getting a lot out of him. In a year and a half from now he could turn out to be a really good college player.”

• On Furman: “He’s on top of a lot of lists in the conference in statistics – tackles for loss, sacks – and he hasn’t been here a year. That’s based on his maturity, experience and age.”

• Another classic Gundy moment followed by what might have been a subtle shot at Legoman: he was asked if he was surprised Kansas kicked to Hill. “Yes.” (Nods. Looks away.)

Next question: “Are you pleased they kicked to Hill?” Gundy: “I am now. A good friend of mine told me, ‘Make sure 24’s on the bus next time you go play a game.’ I said we’ll have one person checking to make sure he’s on the bus.” Maybe make sure SOMEBODY is getting him 15-20 touches each game!?

• He had some interesting things to say about MVP Ben Grogan. He was asked what he’s been doing as special teams coach to get him going. “I don’t consider kickers special teams. They’re a whole different ball game. Ben’s done a good job of just staying focused and improving.”

Then there was this – did anyone know this or did I just miss it? “He had a little bit of a hip flexor issue that caused him some problems. He’s finally healthy…he’s been fine. He’s just out there by himself and I think confidence has been a big factor.”

• Coach was asked if the defense was good enough to win games down the stretch if we run the ball better. His answer seemed a little like another Yurcich shot: “I think so. The defense just gets exposed because they’re out there the whole time. We don’t stay on the field. I’m not saying we’re the Steel Curtain, but we’re playing alright for where we’re at right now. But, we have to start playing along with them on offense to give them a chance.”

• Is he jabbing Yurcich or am I seeing black helicopters?

• Asked if he expects us to be better in November like recent years: “We were better after the Iowa State game than we were after the Missouri State game. Then, last week (thumb down…raspberries!!) we didn’t get any better.”

Should’ve been his walk-off!

• Toward the end there was about a three minute dissertation comparing Dez and Demarcus Conner. He was basically saying (I think) we have to evaluate what we have by who we have.

• Gundy was questioned about how he feels that we’re 15th in the country, 5-1 and undefeated in conference and everyone’s pointing out what’s wrong with us. “I didn’t know anybody was saying what’s wrong with us. I mean, I don’t pay attention to it, but I don’t blame them.” He has to say that doesn’t he?

• On the overall effort and progress at this point in the season (talking about Ogbah here): “What impressed me as a coach is here’s an established player that’s decided to play hard, lay out and give great effort.”

• On the team (and coaches) as a whole: “Our wide-outs are blocking hard…15-20 yards down the field. Linemen are backside blocking. The effort is good; we’ve just got a ways to go and I don’t think we coached very good in the last game. I think the coach up there – his name’s Bowen, right? – I thought he had a really good game plan. I thought he out-coached us.”

• “The effort, attitude, focus, the preparation and practice, all that’s been good.” I hope so. We’re going to need all the efforfocutude we can get Saturday!