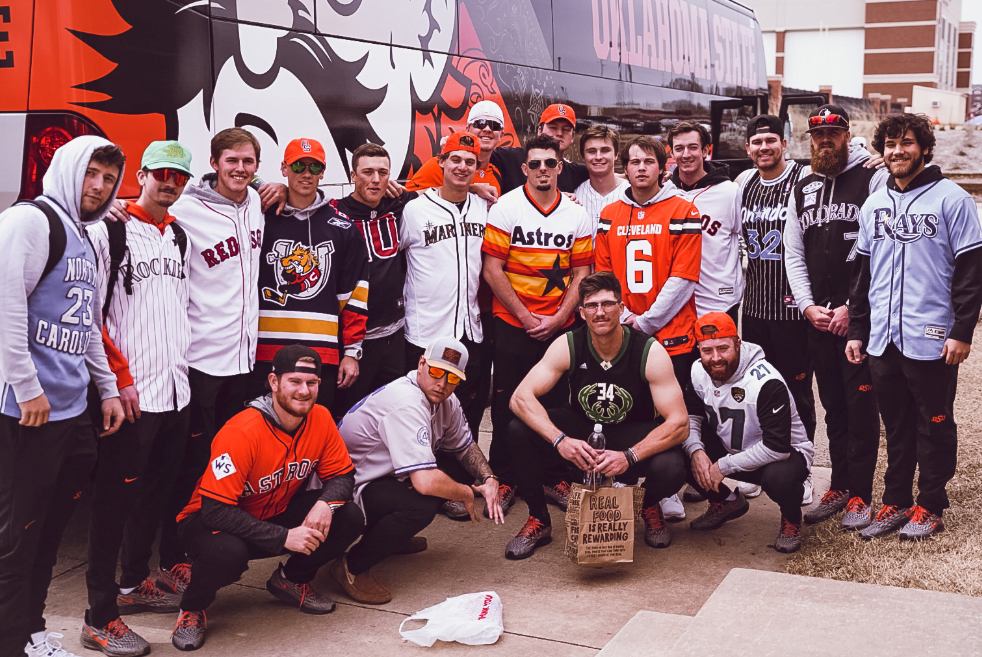 OSU’s baseball team recently took the best photo in sports history. Did you miss it? You may have missed it. Before their trip to Frisco for a beginning-of-the-season tournament, the Pokes posed, each in a different jersey top. Many of them provocative or noteworthy.

I couldn’t just let that moment pass by because this is why websites like this one were created. We have to discuss. Here are those jerseys (as we can see them), ranked.

1. MJ (Carolina): It’s one of the great jerseys of all time and also universally beloved (unlike some of the jerseys on this list).

2. Shaq (Magic): See above but for pro basketball. Pinstripes shouldn’t work on a basketball uniform, but they do here. I don’t know why.

3. Matt Holliday (Rockies): A nice ode, though if we really wanted to go deep, somebody would have unearthed a Hagerstown Suns Josh Holliday jersey. Also: Where are the Robin Ventura White Sox threads?

4. Baker (Browns): I admire the audacity. The bravado.

5. All three Astros jerseys (but the rainbow one first): See above but less so because … Baker.

6. Leonard Fournette (Jags): It’s just so … random. Like, were they sold out of Alvin Kamara jerseys?

7. Mariners: With the rest of these it’s difficult to tell who the player is so I’m just going to make up my own. This one is definitely a Ken Griffey Jr. jersey, but if it’s not then it’s a Jay Buhner jersey.

8. Barrie Colts: Marshall Scott tells me that the hockey jersey with the horse on the front is for the Barrie Colts of the Ontario Hockey League. Could have just gone with a Chuba No. 30.

9. Giannis (Bucks): Less random than Leonard Fournette (can’t get over it!) and a great jersey, although points are subtracted because we went with the old Adidas number instead of the new Nikes.

10. Rays baby blue: Hoping for an Evan Longoria. Would settle for a Scott Kazmir or B.J. Upton.

11. Red Sox: Would like it to be a Wade Boggs or Nomar Garciaparra.

12. Rockies: Has to be another Matt Holliday with no number on the front.

I’m not sure what the rest of the jerseys are. Thought the one next to the hockey one might be a Jimmy G. jersey, but I don’t think it is. Maybe a DeAndre Hopkins number?

The one second from the front left could be anything, although if my life depended on it, I’d say Royals. I think there’s a Broncos jersey in the back and maybe a Yankees one, too.

Anyway, those are my rankings for the greatest sports photo ever taken. Shout out to all the Astros provocateurs and back to your regularly-scheduled programming.