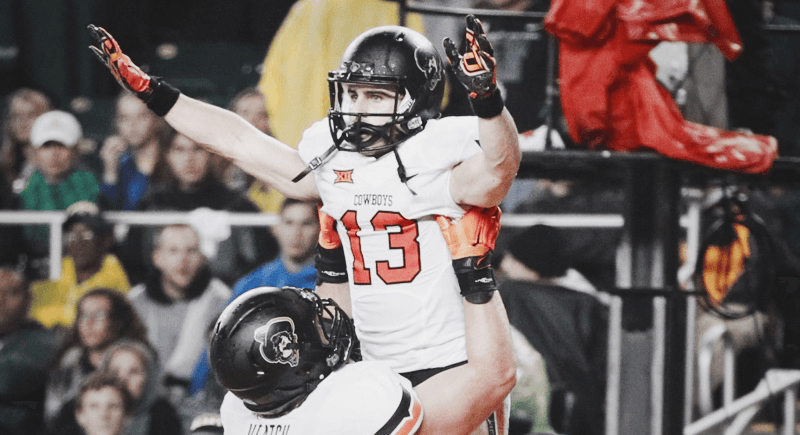 As August chugs along, I’ve started to realize something. Oklahoma State is the rare team that, at least in this moment, appears to be both overrated and underrated.

Mike Gundy has talked about this squad in reverential tones in the last few weeks. I mean, truly crazy stuff. The local media and fans are both sky high about what this squad could be. It feels like … a lot … to put on a team that lost five straight last season and was one punt from going 5-7.

Even in OKC Dave’s survey, nine wins was the consensus. I’m not saying this isn’t a nine-win team. It’s just a hefty weight to toss on a sophomore QB with three starts and a team that plays at WVU, at Texas and two of the four best teams in the country at home (not to mention Bedlam).

Then there’s the flip side.

OSU isn’t ranked in either poll. It wasn’t even included on 49 of the 61 AP ballots. It isn’t mentioned at most places as a threat to knock off Baylor and TCU (OU is though).

In the end, this post will make me look stupid one way or the other unless OSU goes 8-4 and finished exactly 22nd in the country which would mean it was both overrated and underrated. Such is August.

But I think it’s interesting that locally everyone is jacked about the possibilities and nationally nobody seems to have noticed.

Plus, as Glenn Spencer pointed out, nobody in Stillwater even cares about any of this.

“There’s a lot of unknowns,” said Spencer. “However we play – that’s who we are. It’s not about what people expect us to do or what somebody thinks our expectations is. That’s worthless. What matters is what happens out on the field. That’s the only thing that matters. Everything else is garbage.”