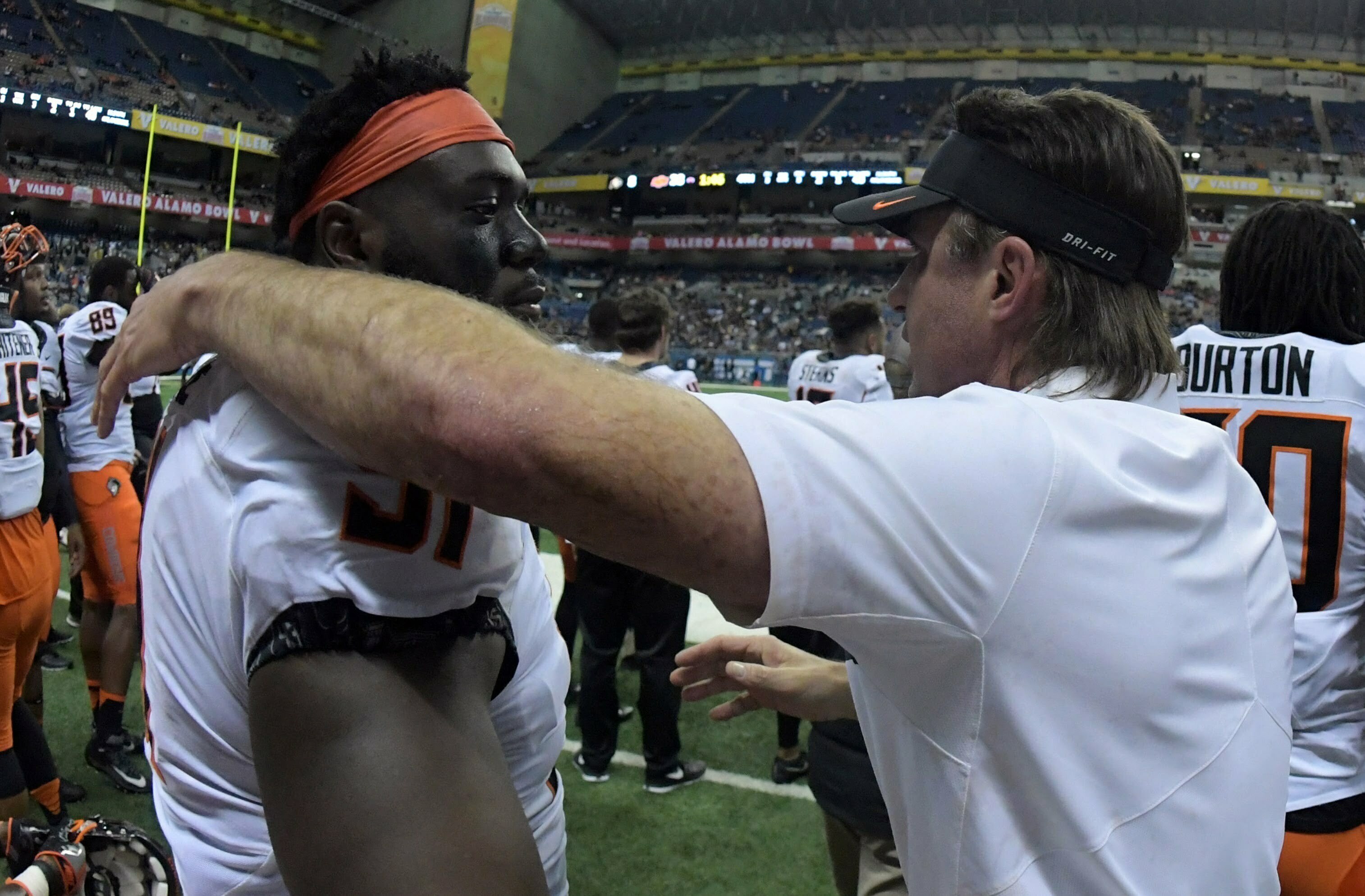 Last week at his National Signing Day press conference, Mike Gundy said something that sounded quite encouraging if you look at it in a vacuum.

“The game has changed considerably, especially in this league,” said Gundy. “Teams are playing with three or four split out from the backfield and they’re moving them across, faking the handoff or faking a pass. In our system, you have to be able to think really fast.

“You have a gap responsibility, a coverage responsibility and a play-fast responsibility, all while two guys are moving from the snap of the ball that might change my responsibility. Each year we evaluate things we think we’ve done positive and overall in all areas. In these last couple of years we think that players that are able to think and react quickly — that are football savvy — they’ll be able to contribute better to our program. If we think you’re a cerebral player and able to get their faster, we’re probably going to pick you over the other guy.”

This sounds great, and it is great. Who doesn’t want smart players? But the other side of the coin here — the side Gundy is not talking about — is that Oklahoma State reeled in what 247sports deemed as the 38th-best recruiting class in the country. We will dive into what that means and how it can be fixed later in the week, but first we need to lay a foundation: Does recruiting matter?

Yes, it does. Of course it does. But I think some of us still refuse to believe that.

One of the prevailing themes of Super Bowl weeks is often, “Player X was a two-star prospect and now he’s playing for a Super Bowl!” I’m grateful for heartwarming stories, but this is a terribly myopic way to evaluate the college football landscape and doesn’t really take into account recruiting as a whole.

Gundy wants cerebral players. He doesn’t care about how many stars you have apparently. That is fine, I suppose, but the reality in college football is that recruiting lots of stars wins championships. If you don’t believe me, you need to read this. We have the data on this. It is irrefutable.

It's a hard pill to swallow, but remember heading into NSD: If your classes are annually outside the top 15, there's no NC in your future.

#NSD: every national champion in the ESPN 300 era (since 2006) had a Top 10 recruiting class in the class immediately preceding its title.

• OU and Texas have six of the 10 Big 12 titles in that span (OU has five of them). Recruiting. Matters.

• Every team finished within two spots in winning percentage of its corresponding recruiting ranking except for WVU (underachieving and recruiting on an island) and Kansas State (not everybody can be coached by a wizard!)

• How scary is it that over the last 10 years OSU has been the third-best recruiting team in the Big 12 with an average national class in the 30s?

• Baylor’s run of nearly winning three straight Big 12 titles is confounding given their recruiting class rankings (similar to OSU). Although it appears there was a lot going on down in Waco …

College football teams are made up of four recruiting classes. Freshman to senior. I looked at the average national four-year class ranking of each team that played for the title or made the CFB Playoff since 2007.

That’s a sobering chart given that OSU’s best four-year class in that timeframe (2007-2010) was ranked on average No. 30. Its overall national average recruiting class in the last 10 years ranks No. 33.6 (again, this ranks third in the Big 12 in that timeframe).

The silver lining in all of this is that schools with average recruiting are sneaking into the CFB Playoff (Washington and Michigan State). They are then getting hammered. But they’re still getting in.

The bottom line here is that you might be able to squeeze out a Big 12 title with mid-30s recruiting classes — Baylor and Oklahoma State have both done it. Kansas State, too. But to win it all would be unprecedented in this era (granted, the sample size is not huge). And to sustain winning a string of conference or playing for a handful of national championships with those mid-30s classes? No chance.