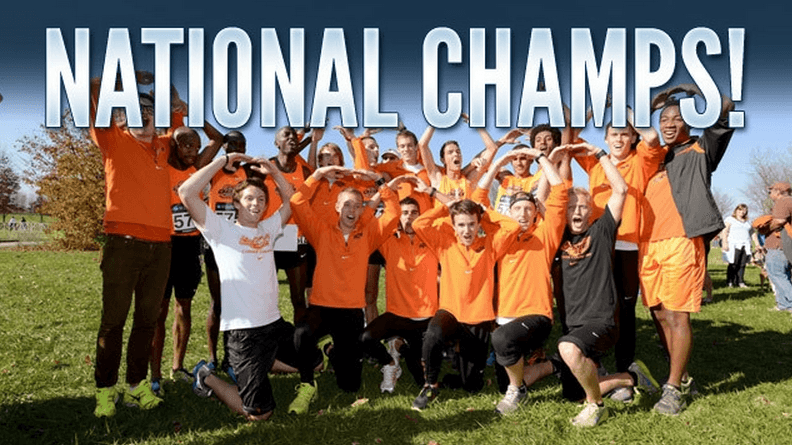 We think this is the OSU Cross Country team. (via NCAA.com)

Despite a rough though ultimately successful year in Football, 2014 was a big year in every sport for OSU. Cowboy Baseball finished the year as the regular season Big 12 champs and hosted a Super Regional, while the struggling Basketball team managed to record a winning season and make it to the NCAA tournament.

But this is not the only place the Cowboys found success.

Apparently OSU also won their 7th straight Big 12 title in a sport that was only identified by the mysterious name “Cross Country.” Despite the obscure and mystic nature of this sport, OSU has not only dominated the Big 12 but has won 3 national championships in the last 6 years.

We were pretty sure this sport couldn’t possibly have been around for more than a decade, but those are still some pretty impressive numbers. But it gets even more impressive: the sport isn’t new. OSU was also the national champ back in 1954, so it’s been around for at least that long.

Athletic Director Mike Holder said that he was proud of the Cowboy’s dominance in the surprisingly old sport.

“Seven?” said Holder. “In a row? That’s great! Geez, why doesn’t anyone tell me these things.”

Other coaches from around OSU were equally amazed by how well Cowboy “Cross Country” has fought/thrown/rowed/something its way to the top of the Big 12. Football coach Mike Gundy was especially impressed.

“I think they’ve done ok,” said Gundy. “I mean, when you look at the numbers they’ve put up, it’s not hard to understand why they’ve had the success they’ve had. They’re posting great scores and really defending well, which is important if you want to avoid turnovers.”

Basketball coach Travis Ford notes that he has been following OSU’s “Cross Country” team for quite some time and has really enjoyed watching them develop.

“I mean, their coach, wow,” said Ford, scratching the back of his head, “He (she?) is fantastic! You watch the way those players have grown over the last few years, how they’ve really put in the work and bulked up. They’ve definitely built quite a system for getting those boys ready to step into the ring.”

Baseball coach Josh Holliday applauded the “Cross Country” program. When asked about whether he found their success impressive, Holliday said, “Uh… sure.”

The student-athletes at OSU also showed their support for the 2014 Big 12 champs.

“I think I know a guy on the team,” said senior basketball player Le’Bryan Nash. “He’s about this high [holds hand at roughly 5-1/2 feet] and has brown hair. Yeah. He’s cool.”

Senior defensive lineman James Castleman said that he and the “Cross Country” team often work out together.

“Yeah, me and the guys go for runs a lot,” said Castleman. “I can’t usually run as quick as those guys, but I can tow the pace car and truck behind me no problem if they run out of gas, so they let me tag along. Kirubel […Smith? Doe? no idea] gives me a bad time about not being that fast but then so do the wrestlers. I just laugh and roll it off.”

OSU’s “Cross Country” coach(es) and player(s) could not be reached for comment because we had no idea where to look for them.