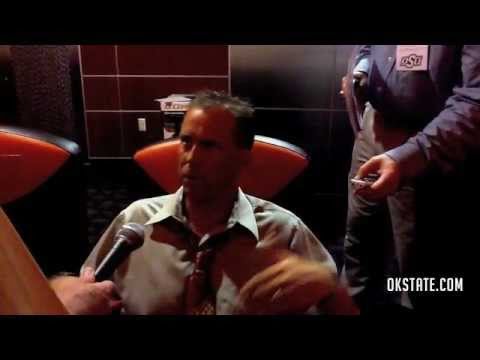 Game Story
On an exciting, sticky night in northeast Oklahoma, a potentially historic team took the field from the northwest corner of the nicest stadium oil and gas money can buy.

However there was nothing about this night that felt historic, much less like OSU deserved to call itself a top 10 team (which is kind of funny because they’re probably going to move up a spot in both polls after Oregon’s loss).

You never really got the “this team has some legitimate swag” vibe from anyone: the fans, the coaches, or the players themselves. A lot of that undoubtedly had to do with the fact that they were playing a Sun Belt team in a game their backups could have won, but still, I expected more.

In a weird way though, I’m kind of glad it happened like this. Yes, Weeden looked downright bad at times. Yes, the offense looked rigid and a little disconnected in spurts. Yes, Louisiana put up 34 on the #8 team in the country in its own house.

First of all, how funny is it that Weeden tossed up a top-10 all-time passing night in school history, this team got within 9 of the single game record for points, AND they put up the 9th most yards in a single game in the history of the school and everybody is acting like the world is over? Monken even called it catastrophic.

See this is what happens when you’re great, people start expecting perfection.

I’m with Gundy and what he said in his post-game press conference: “I like when we don’t play as good and score 61.”

OSU got off to a lackluster start in the 1st (the overall tempo looked sloooow) but bounced back in the 2nd for 21 (Smith, Cooper, and Randle TDs) points in a quick 5-minute span.

Even when Weeden was threading the needle though (he had an unreal pass to Tracy Moore between two guys in the 1st) he didn’t look that comfortable. I’m not sure if that was a function of the offensive line not really playing that well or just first game rust but it was odd to see. Bill Haisten thought he wasn’t getting the plays in fast enough.

The Cowboys went to the half with a 34-10 lead but could only match Louisiana’s 10-spot in the 3rd quarter before finally putting it away on a nasty Michael Harrison slant TD early in the 4th.

I feel bad for the defense because the 34 Louisiana ended up with is not indicative of how well the starters played all night. The DL mixed things up and never let them get settled in and the linebackers and secondary were both electric. It was truly strange to watch a 3rd long and not think “we are DEFINITELY giving this up.”

What we learned
Joseph Randle is going to be a problem for Big 12 teams this year. I don’t know if he’s been working out with the defensive linemen or what the deal is but he ran like his job was at stake on Saturday night.

The secondary has a chance to be special. Yes, I’d like to have Johnny Thomas back to round out the depth but Daytawion Lowe looked awesome. Markelle was doing Markelle things and the young corners (Hedgepeth and Gilbert) did not look like sophomores at all.

There might be an RB3 controversy. Desmond Roland got all the 2nd team snaps in the 4th quarter (and looked terrific). Herschel Sims tweeted after the game that (and I quote) “this was some bull sh**.” Yay, fun for everyone!

Weeden is human. I don’t know what we expect from him, but he looked ordinary at times on Saturday. He spliced that ordinariness with flashes of “I have every throw in the book” signs, but there’s work to do. Total confidence in him having a MASSIVE game on Thursday night.

Uniform thoughts
I honestly thought I was going to like the gray more than I did. I recapped it a little my my ten thoughts last night but I couldn’t tell who was who on the field. Everybody looked like #88. I’m not one of those “I hate gray, we should never wear anything but all orange even though it makes us look like convicted felons” people. I just didn’t think the gray on white was a very good look, I hope they don’t go with it again. Although I will say I got home and watched some of the game over again and they looked a lot better on TV than in person. Probably just because I have an announcer telling me who the player is so I don’t have to wonder why Justin Gilbert went from #4 to #444 since last year.

Grade: C (I like the pants with the thick stripes more than I thought I would).

A few other notes
I gotta give it up to the phone carriers for getting service going inside the stadium during the game. Sending a text in there used to be like trying to create cold fusion but I was able to tweet and text freely all night.

I’ve never seen Weeden as animated as he was after Tracy Moore apparently ran the wrong route on a 4th and 2 at the beginning of the 3rd quarter. He threw his hands up Eli Manning-style at #87 and appeared to chew him out as they walked off the field.

Does anyone else think it’s kind of funny when Gundy gets really upset and starts yelling at the refs? He lost it in the 3rd on a bad Markelle Marting pass interference call and I was like “it looks like he’s truly having an out-of-body experience right now, like he doesn’t even know what he’s doing.”

There was a rather gratuitous make out session on the kiss cam in the 2nd quarter.

Why did Blackmon get removed from a 3-possession game in the 3rd quarter?

There are no words for how much I hate the quick snap handoff after a big play.

Monken ran a lot of pistol formation with Smith in the backfield. Probably just a shout out to this blog, appreciate it, Todd.

I thought the offense ran a lot of the same type of plays in a row too much. That is they would go four runs to Randle followed by six straight passes followed by five more runs.

Markelle Martin had 3 picks hit his hands. He dropped all of them.

Dear students, you’re embarrassing the person paying your bursar by starting the wave.

Blackmon looks like a complete monster on the field. He just looks bigger than everyone else. I have a feeling he’s going to make all my preseason picks look really dumb.

Soundbytes
Why does Todd Monken look like he’s coming off a 3-day bender in this video? And how long is his tie?

How funny is Blackmon’s tanktop?