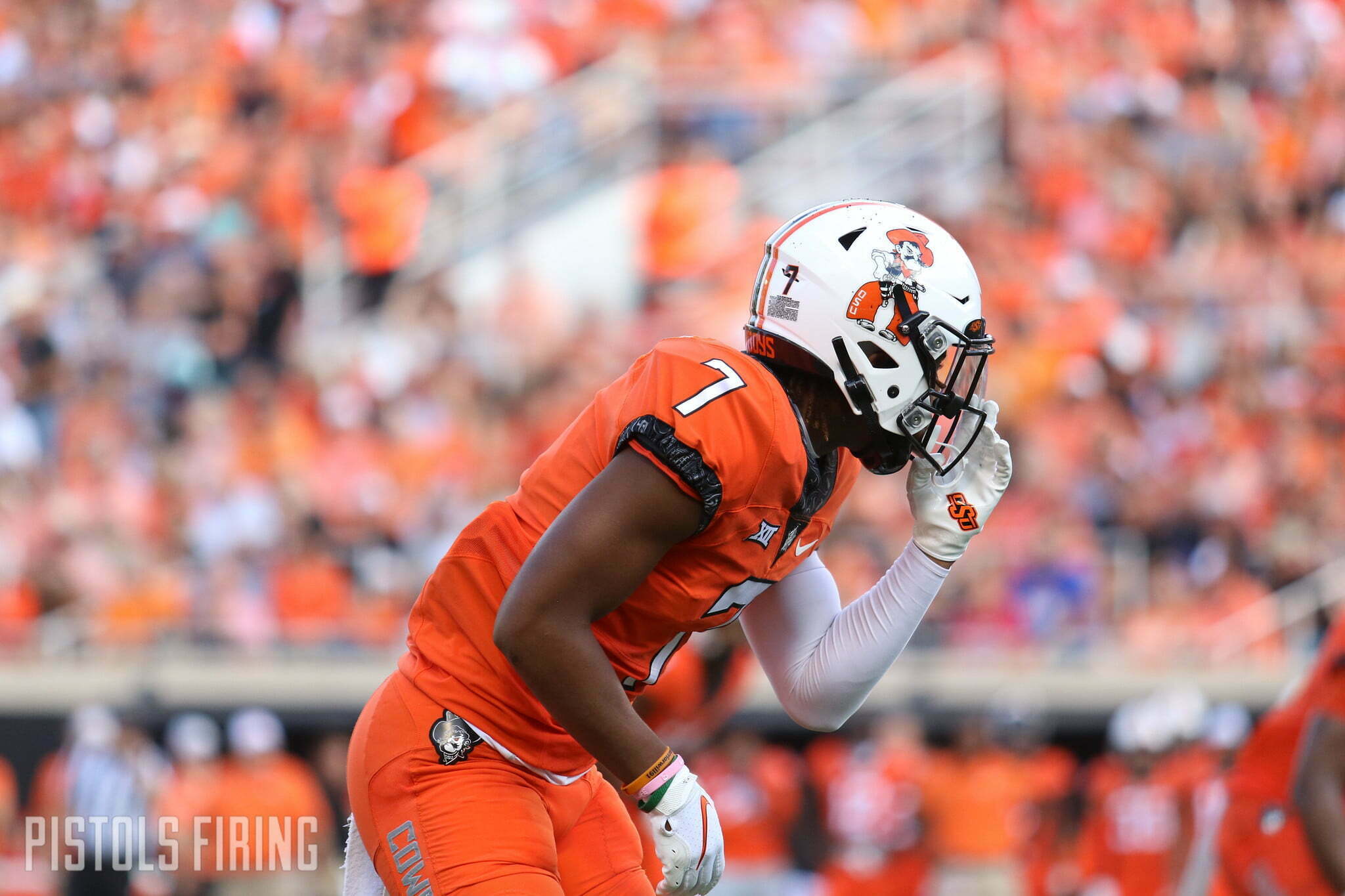 Oklahoma State’s defense showed up at the onset against Central Michigan, creating the safety that flipped the momentum of the game early. It held strong for most of the first half, facilitating a 30-0 run by the Cowboys’ offense and allowing OSU to take a four-score lead into halftime.

But the young faces of Derek Mason’s group showed growing pains, and the Chippewas chipped away at the Cowboys’ lead, coming to within 14 in the final minutes, making for a less-than-ideal box score for a defense that was considered one of the nation’s best last year.

So should fans up the prescription to their heart medications and resign themselves to the old-fashioned Big 12 shootouts of yesteryear? No so fast, says veteran defensive tackle Brendon Evers.

“Any time you get a change, whether it’s a player, or a whole back end or a new coach — there’s new faces besides him around — it’s different,” said Evers. “For me, I’ve seen three coordinators since my time here, so it’s not anything that I haven’t seen, maybe it’s a little different for some other guys.

“But it’s Game 1. People were saying way worse things a year ago after Game 1, so it’s nothing new to this program and this team. We all came in Friday morning with an open mind and a willingness to get better from our mistakes, and I think we’ve done that looking at this Tuesday practice.”

To be fair, most of the angst after OSU’s 23-16 squeaker over Missouri State last year was over its offensive output, but Evers’ first point is a fair one. It’s one game, and it was the first start for several key playmakers on the back end of the Cowboys’ defense. In fact, among the two linebacker spots, three safetys and two cornerbacks that the Pokes field, only Jason Taylor had more a single OSU start under his belt when the lights flipped on for Central Michigan. Four of OSU’s five returning defensive starters play along the defensive line. That’s a lot of inexperience shouldering a hefty load.

Mike Gundy touched on those growing pains during his weekly press conference.

“You have communication that takes place from corners to safeties, safeties to linebackers, goes on throughout the game,” said Gundy. “So, veteran players can keep their eyes on something and move around and see something and relocate, still hear and get communicated and pass the communication on.

“Young players see things happen, they’re trying to figure out what to do and where to go and they don’t even hear anything. So the communication needs to improve and both things you mentioned took place in that game.”

New to his role but not to the team is Sean Michael Flanagan, a redshirt senior safety who has been on campus since 2018, but appeared mostly in spot duty and niche packages behind a logjam of secondary talent. In his first career start he logged four tackles and a pass breakup. He also had a QB hurry that was waived off due to an unrelated penalty.

Flanagan doubled down on his head coach’s sentiment.

“It’s communication,” said Flanagan. “You can be two steps behind somebody from lack of communication and you won’t make the tackle. And we’re a good-tackling team. So it’s all about getting lined up and communicate the call.”

Gundy also pointed to the changes among the defensive staff, not just at the top. There were some growing pains for those wearing headsets, as well.

“They take it all in, then they’ve got to get it communicated then get into the players getting back on the field,” said Gundy of his staff. “There’s a lot that goes on, and I don’t have any way to make it happen smooth without experience. They need experience working together just like the players do.

“So, the good news is 90-something percent of it is correctable, and it’s just based on communication and experience and everybody learning to work together.”

We knew (or should have known) that this would not be the same defense that was a flagship for the conference last year, that ranked third in points per drive allowed, fourth in total defense and Top 10 in most of the categories that matter. Not with all of the turnover behind its defensive line. Not with a change at defensive coordinator. Not this fast.

But that knowledge does not preclude growth, and change, and gelling. The biggest question will be how fast those can take place and whether or not the Pokes’ offense can keep them afloat until then.

The message from inside the locker room: “It’s just Game 1.”

“Y’all can see there’s not a worried look on this team,” said Evers. “We just have to understand that we didn’t play to our full standard for a full 60 minutes, which will be better this week.”

The Cowboys will get a challenge and a chance to prove it at 6:30 p.m. Saturday when Arizona State comes to town.