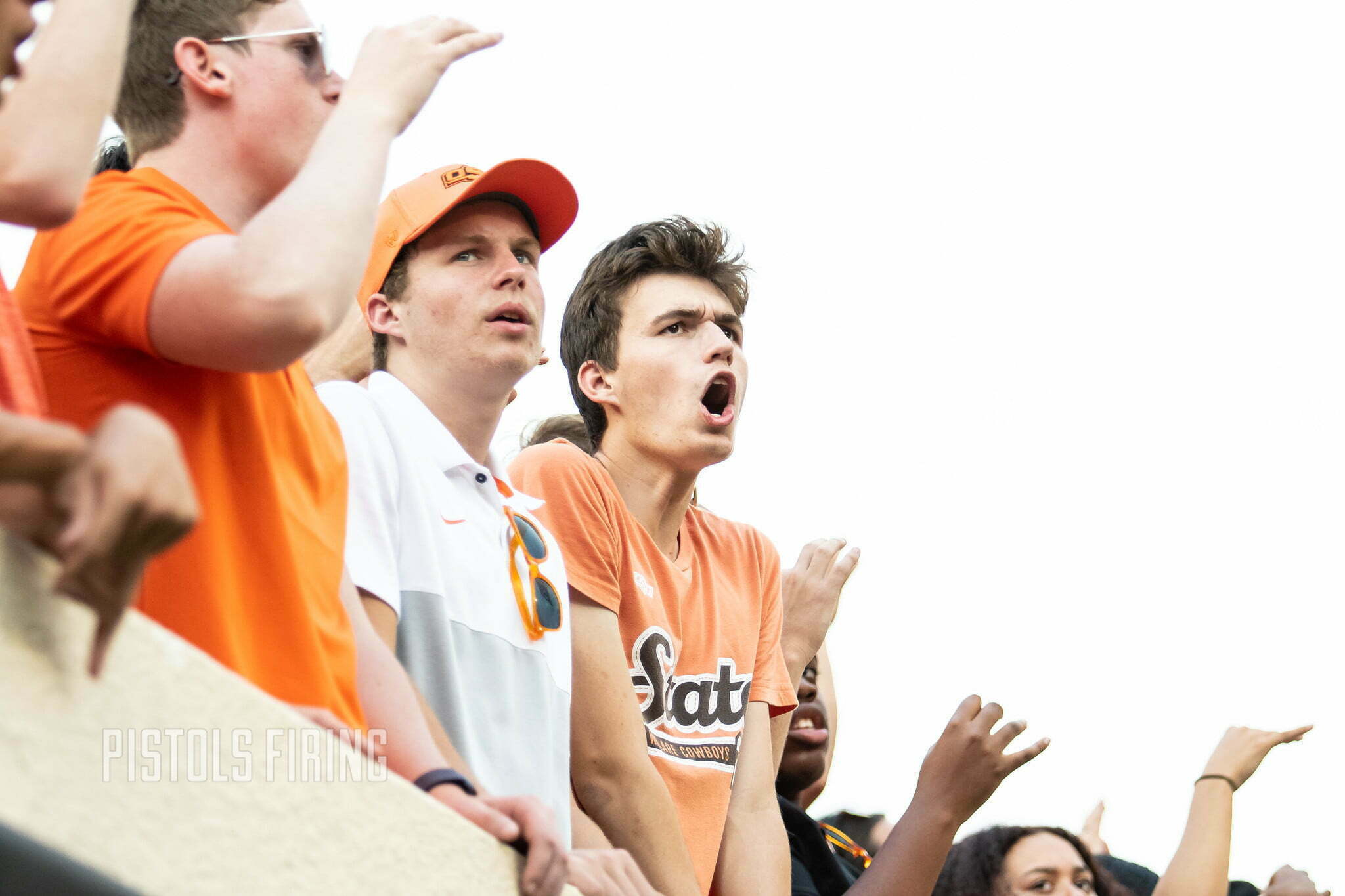 There was a lot that went wrong that continues to affect the program. You don’t lose five of your last six games being this talented without some issues.

So today we’re going to do an OSU season postmortem to try and explain it all — in pieces.

When your best offensive weapon isn’t 100%, your best offensive gameplan is often not enough without some help and elite weapons. That was obviously the case down the stretch. It’s no coincidence that Sanders’ shoulder injury, believed to have been suffered sometime before the TCU game before deteriorating more as weeks went on, coincided with OSU’s late-season slump. OSU won just one game in November and December as Sanders was in (but mostly out) of the lineup. And even when he was in — against Iowa State and against OU — he was clearly not 100%. OSU probably should have lost to Iowa State, and it had no business being close late against OU after surrendering roughly 300 points in the first quarter of that game.

OSU ranked ninth (out of 10) among Big 12 teams in rushing yards per game. It was so bad that true freshman Garret Rangel attempted 40 passes in his first start against Kansas then three weeks later attempted 42 passes — in a MONSOON — in a home loss to West Virginia. They just totally abandoned the running game because it did not work whatsoever. On a per-attempt basis OSU ranked 113th out of 131 Division-I teams in yards per carry. That mark was ninth in the Big 12 and 12th-worst among all Power Five programs. This led to OSU being extremely predictable when calling plays, and of course playcalling on the offensive side of the ball is a major point of contention in the fanbase. This is statistically the worst offense OSU has fielded since 2005 on a points-per-play basis.

Most teams have no great options at QB behind their starter, and the season of dreams basically goes as QB1 goes, so this isn’t unique to OSU. But clearly Garret Rangel — who I think has a bright future — wasn’t quite ready to be thrust into action. He’s a really nice developmental prospect who I think can grow into becoming a starter, but as a true freshman asking him to be half of what Sanders was for this offense was just wild and unfair. OSU should have had a veteran sitting behind Sanders a la Dru Brown to take over if Sanders were to miss time so Rangel could continue developing. The portal took Shane Illingworth from the Cowboys last offseason, and OSU coach Mike Gundy has stressed the difficulties of keeping a quarterback cupboard full in the transfer portal era. Instead they had two unproven options in Rangel and Gunnar Gundy, neither of which had taken meaningful snaps in a game before this season.

In hindsight, we probably should have asked the rather obvious question of How do you recover from taking a 48-0 beatdown at Kansas State? Because the answer was Uh yeah, you don’t.

OSU lost to K-State 48-0 on Oct. 29 — its second loss in three games — which effectively ended any CFP hopes and put the Big 12 title hopes in long shot spot. The Cowboys never recovered. They lost by 21 to Kansas the following week, squeaked out a close one over Iowa State at home the next week then never got back into the winner’s circle from there.

All things considered, OSU was . . . relatively healthy to the end. But when your QB1 is down it exacerbates things. And there were some notable dings and bruises that affected things, no doubt. Offensive lineman Preston Wilson battled through injury. Likely starting guard Cole Birmingham went down before the season. Hunter Woodard’s absence down the stretch was a major factor. Then of course there was running back Dominic Richardson fighting through pain, receiver Jaden Bray never quite getting to 100%, Blaine Green missing the season, Queso Brooks missing key moments. You can’t attribute it all to injury misfortunes, but it was certainly a factor.

Like it or not, the college football environment is such that now young players — even if they are in a deep position group — demand they see some opportunities early. That’s reportedly why former four-star athlete and electric factory Braylin Presley ultimately hit the portal and transferred. It’s hard to keep everyone happy when you have a ton of quality skill players, and ultimately you’re going to lose some guys because not everyone can be placated. But losing John Paul Richardson (a bowl game captain) and Presley (a former four-star from Bixby who looked like a mini Tyreek when he actually touched the ball) and Johnson Jr. (who looked like a future star) is just really, really hard to stomach. When you don’t consistently recruit elite talents by recruiting metrics, the ones you hit on you have to keep around.

Last season under Jim Knowles, the defense had an identity. It knew what it was and it was successful in being itself: by rushing the passer, applying pressure and forcing mistakes. This season there was no identity. The running defense was outside the top 100 in yards allowed per game. Same for the passing defense. As a team OSU averaged just 1.8 sacks per game, which ranked 93rd among Division-I teams, despite ranking third nationally last season with more than double that average (3.8).