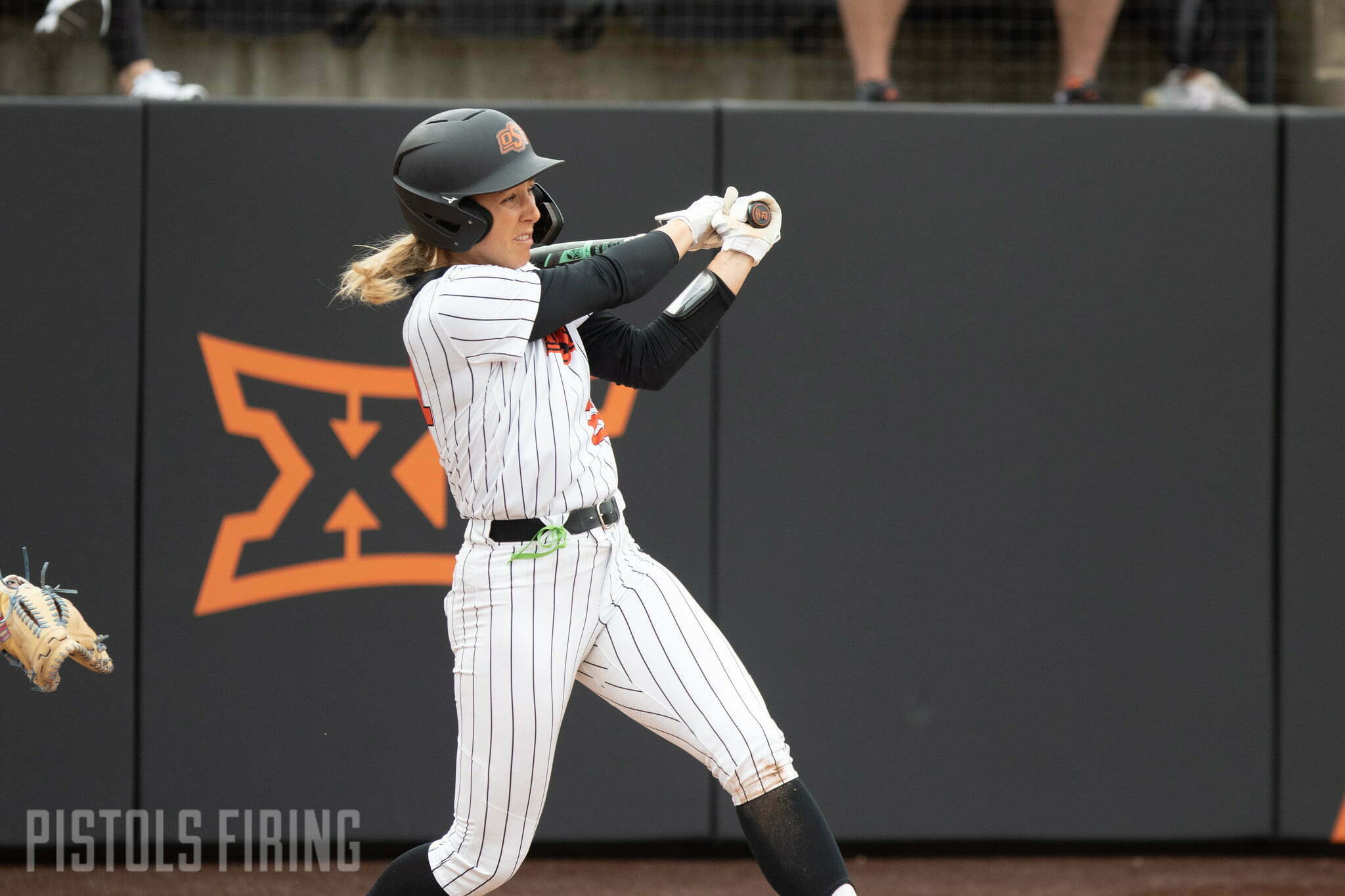 No. 9 Oklahoma State protected its home field with relative ease on Saturday, winning back-to-back games over Kansas City and Wichita State by 14 total runs to secure the sweep of the Mizuno Classic. That came off of a pair of run-rule victories the Cowgirls handed the two squads on Friday.

OSU took control of the game with a seven-run second inning and never looked back. The Cowgirls’ bats have been white-hot of late.

Sydney Pennington, Chelsea Alexander and Kiley Naomi each hit a two-run homer in that inning, and then Hayley Busby sent Julia Cottrill across the plate with a single to centerfield. Brianna Evans’ sac-fly in the bottom of the fifth sent Hailey Kastl home.

Morgan Day moved to 5-2 with the win, pitching six fullings and striking out four. She allowed two runs on seven hits and walked two. Tatum Clopton came to the circle in the seventh and was able to protect the Cowgirls’ six-run league despite a little drama.

Kansas City’s Kloe Hilbrenner singled to center, stole second and then advanced to third on a wild pitch before Clopton walked Alexis D’Ambrosio. But the Cowgirls defense retired three-straight batters by foul-out, ground-out and ground-out to seal the win and strand two KC runners.

The Cowgirls’ bats didn’t cool down on the final night of winter.

A two-run home run by Wichita State’s Zoe Jones put the Cowgirls on notice, but they answered with a four-run first inning thanks to RBIs by Julia Cottrill, Hayley Busby, Sydney Pennington and Kiley Naomi.

Chyenne Factor, who shares the current Cowgirl lead with Cottrill, hit her eighth home run of the year. That a solo moonshot over the wall in right-center in the second necessitated a (Shocker) pitching change. Cottrill tried to take back the team lead with a single to centerfield. The ball stayed inside the park, but it sent Kaelynn Carwile back to the dugout with her second score.

Unsatisfied with two scores on her stat sheet and eager to get onto spring, Carwile hit her second home run of the season on OSU’s first at-bat in the fifth, pushing the Cowgirls lead to 10-2 and enacting the mercy rule.

Kelly Maxwell moved to 9-0 on the year, striking out 10 in just four innings. She allowed two runs and walked three. Miranda Elish put a bow on it, retiring three-straight batters in the fifth with one strikeout.

Kenny Gajewski’s team has won 10 of its last 11 and sits at 21-6 ahead of Friday’s Big 12-opening series against Texas Tech.

“Very happy with the way this team is performing,” said Gajewski. “The way they’re working, the energy this team has brought in the dugout, it’s a fun group. I should say too, our crowd today was amazing.”

The Cowgirls face off against the Red Raiders at 6 p.m. inside Cowgirl Stadium and at 2 p.m. Saturday before capping the weekend series at noon Sunday.