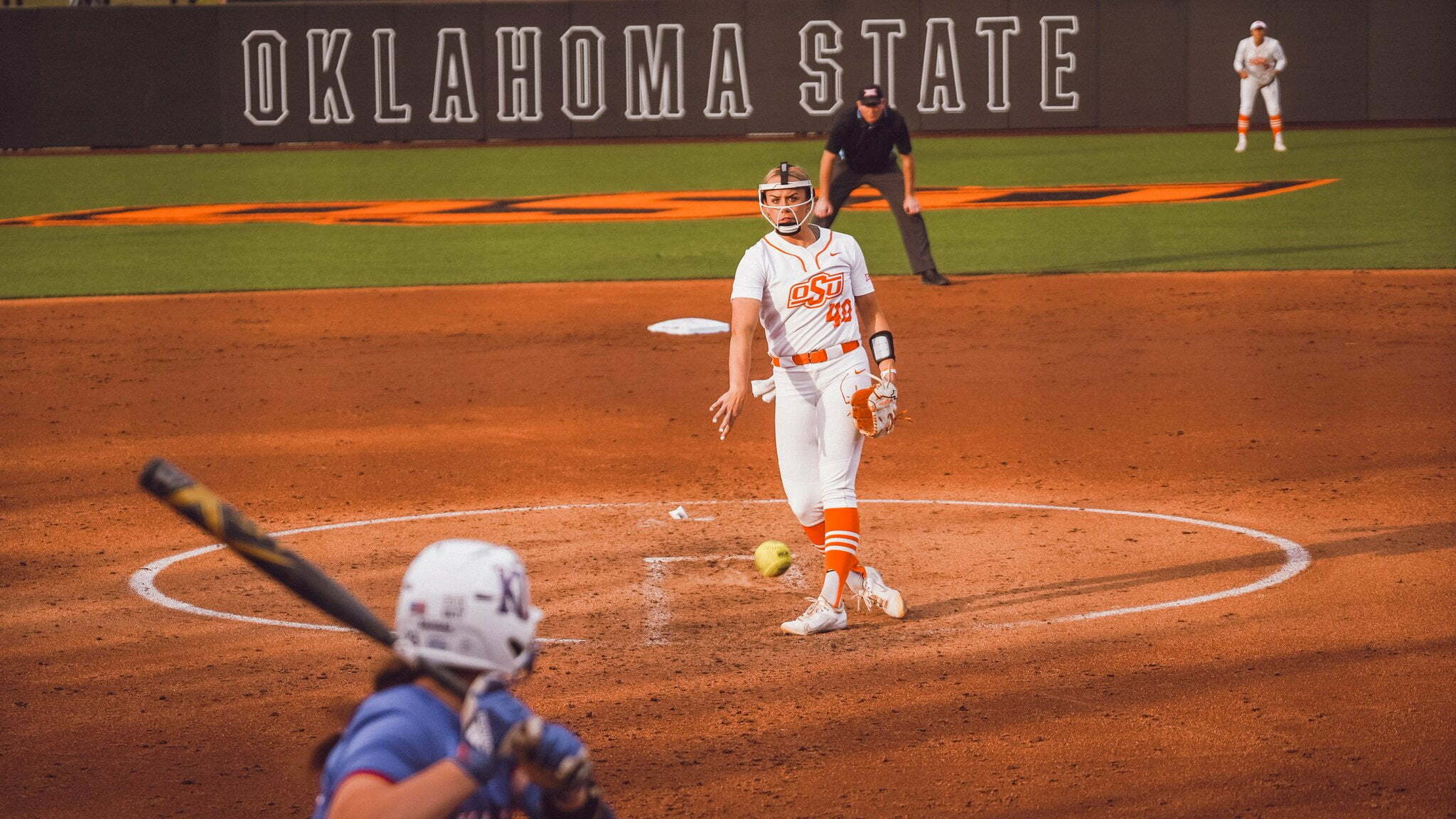 STILLWATER — For just the second time since 2019, the Cowgirls played a softball game without Kiley Naomi.

Naomi, Oklahoma State’s shortstop, was sidelined with a back injury, but after an early scare, the Cowgirls came back to beat Kansas 9-4 in the teams’ series opener. Naomi tweaked her back in warmups. OSU coach Kenny Gajewski said sitting her was “erring of the said of caution.”

Entering Thursday night, Naomi had started 183 of the 184 games she has been on campus for. In her stead, Sydney Pennington shifted back over to shortstop, and Karli Petty filled in for Pennington at third. The infield duo of Pennington and Petty combined for a putout, six assists and no errors.

The Jayhawks jumped out to a 4-0 lead after two innings before Miranda Elish locked things down. She finished having thrown all seven innings where she gave up the four runs off seven hits while walking one, hitting one, and striking out 10.

It’s the second time this season Elish started a series-opening game. Against Baylor on April 1, Elish threw a complete game against where she allowed one run off six hits. Although she might’ve allowed more runs Thursday night, she also provided some runs.

Elish went 2-for-4 at the plate against the Jayhawks with five RBIs. She tied the game and took the lead for the Cowgirls. In the bottom of the third, Elish hit a no-doubter over the batter’s eye in centerfield. It was her fifth home run of the season, and it tied the game at 4.

Elish came back to the plate in the fifth inning, and she delivered again. She singled up the middle, allowing Chyenne Factor to score from third to give OSU a 5-4 lead.

“I like hitting and pitching both because if I’m not doing well pitching, like this happens tonight, then I’m able to kinda pick up myself and help my team a little bit on the other side of things,” Elish said. “But you really can’t carry one into the other because even if you’re doing great pitching, it doesn’t mean you’re gonna do great hitting.”

That was the start of a four-run fifth inning for OSU. With the bases loaded and one out, Pennington hit a ball deep to center. Macy Omli caught the ball but crashed into the wall, and Jules Callaham and Hayley Busby were each able to tag up and score. Petty provided the final run with a single to center that scored Julia Cottrill.

Elish was helped in the circle with a few solid defensive plays. In the third, Olivia Bruno hit a ball to Petty at third. Petty rifled it over to Brianna Evans at second who whipped it over to Busby at first for a double play.

The next inning, Omli hit a two-out single up the middle. Shelby Gayre rounded third and was headed home on the play, but Factor threw her out at the plate. The play went to review (one of the first reviews in Cowgirl Stadium’s history), but the replay went out during it, and the umpire was unable to make a call. Gajewski joked after the game that his button in the dugout works.

The win moves the Cowgirls to 32-7 on the year and 9-1 in Big 12 play. OSU and Kansas will continue their series Friday, with first pitch scheduled for 6 p.m. at Cowgirl Stadium.