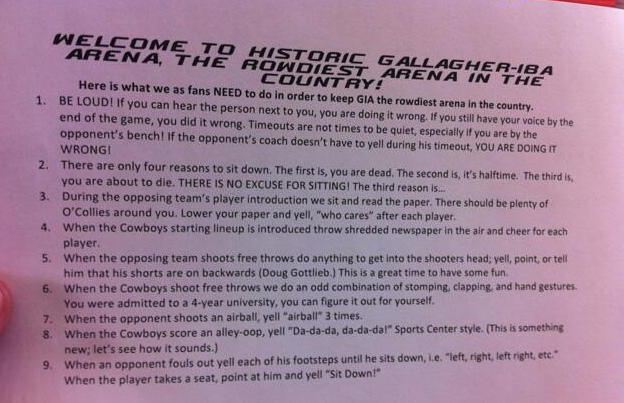 UPDATE: I originally thought this was from OSU and its athletic department but it was pointed out to me that it was actually a collection of students who put it together. Sorry for the confusion, I screwed up, it was my fault, I should have done better, I am the worst.[1. Although I contend that the athletic department still allowed it and thus condoned it…unless we’re just allowed to put whatever we want on the seats in GIA, in which case I’m ordering a lot of PFB shirts for the next home game!]

Ah, this is kind of sad.

I do appreciate the effort from some OSU students here but…it’s not good that they feel like they need to do it.

These placards were placed in the student section at GIA last night for the TCU game.

My favorites in order…

1. It says “there are four reasons to sit down” and two involved death and then they only list three.

2. “You were admitted to a 4-year university, you can figure it out for yourself.” That’s incredible.[1. Also, while we’re discussing the merits of higher education, it’s “four-year” not “4-year.”]

3. If you’re putting these cards out you clearly don’t think the students have an acute knowledge of the program and yet you make an obscure reference to somebody who did something 14 years ago during an away game (Gottlieb) and they’re supposed to understand it?

4. Where do I bet all of the money that the SportsCenter theme doesn’t catch on?

5. I love that we need a count on how many times to yell “airball.”

6. “O’Collies” makes me giggle for some reason.

AFH and Cameron just took their beers and went to hang at a different party.