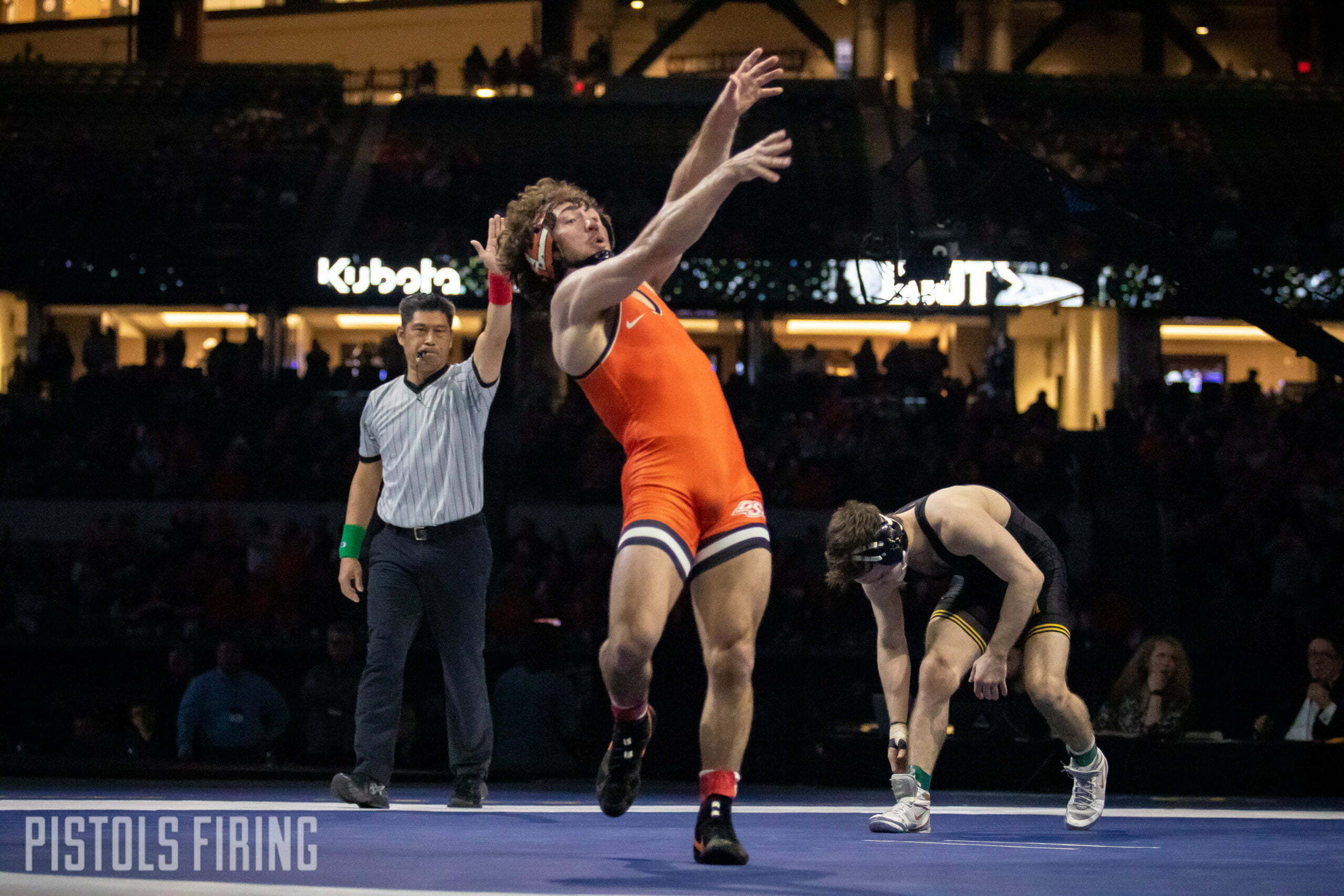 ARLINGTON, Texas — One of the most historic rivalries in all of college sports was put on a unique stage, but it didn’t end well for the Cowboys.

Oklahoma State fell to Iowa 23-9 in the Bout at the Ballpark event at Globe Life Field, where the MLB’s Texas Rangers play. The Cowboys mustered an early lead, but hit a tough stretch of matches in the middle weights.

The stretch of 149, 157, 165, 174 and 184 each had matches with wrestlers within six places of each other in the national rankings. Iowa won four of those. Oklahoma State won one.

“I just felt like at 141 and 149 and 157, 165, that group right there just didn’t seem to really compete on their feet in many places,” OSU coach John Smith said. “… They just need to recognize that they’re leaving a lot on the mat. I think it’s an opportunity for us to grow and prepare for next week. No quit in us. Just a little disappointing.”

OSU fans can take some solace in the fact that Daton Fix moved to 3-0 against Austin DeSanto. In a tight match, Fix scored takedowns in the first and third periods. DeSanto pressured Fix toward the edge of the mat for much of the match, but Fix was able to coolly use that aggression against DeSanto in his takedowns. Fix won 5-3. The only points DeSanto scored came off escapes.

“I wasn’t crazy about [my performance], honestly,” Fix said. “I think that I could’ve scored a couple more takedowns. The guy is putting so much pressure on me, I should be able to go get three, four takedowns on the guy. He’s coming right into me, all I gotta do is change my level and get to his leg.”

It was Fix’s second win of the night after he beat Ecuador’s Giusseppe Rea in a freestyle match earlier in the evening as part of Team USA. Fix won that bout via technical superiority in 1:41.

“I don’t know if you guys know this, but I wasn’t able to make weight until after my first match,” Fix said. “I had to wrestle my first match pretty much down to weight. I wrestled my first match, went back, checked my weight, and I was two tenths under. So, I didn’t have to do anything else, and we weighed in about 15 minutes after that. It was a pretty quick turnaround from wrestling to weighing in.”

Trevor Mastrogiovanni put up a gutsy performance at 125 to start the dual. Hampered by an ankle injury, Mastrogiovanni didn’t work out at all last week, according to Smith.

He was in an interesting spot against unranked Jesse Ybarra, trailing 4-1 in the third period. Mastrogiovanni managed an escape before scoring a takedown. After an Ybarra escape, Mastrogiovanni scored on another takedown at the last second of the match to secure the win.

The Cowboys’ best performance of the night came from Dakota Geer at 197. Geer, ranked 11th nationally, nearly had a major decision over No. 15 Abe Assad before Assad made a late escape. Geer won 9-2, scoring three takedowns and picking up a riding time point in the process.

“By any means, I don’t have shame,” Smith said. “I’m not there. I’m just saying, ‘Hey, we gotta get better and not accept this. We have a couple dual meets left in Stillwater, one of them being Bedlam. We got the Big 12 left. Let’s go out, and let’s score a takedown.’ … It’s almost like, ‘Have you been taught anything?'”