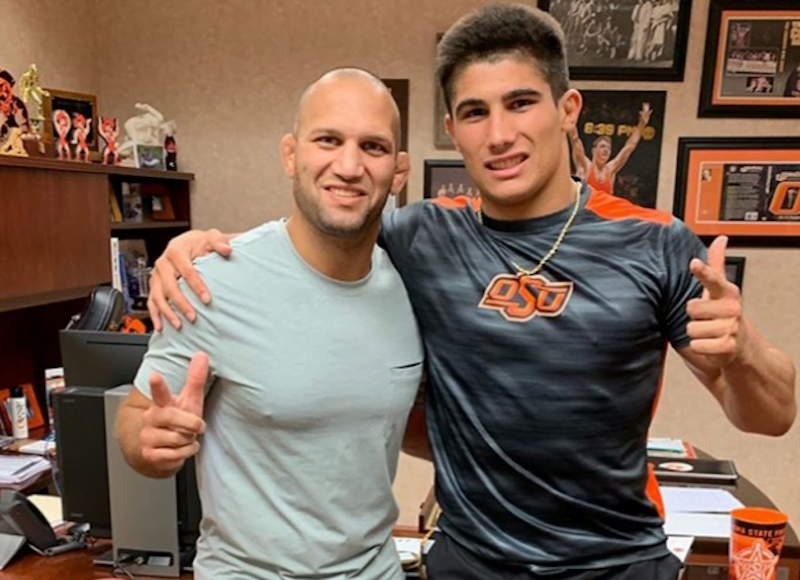 I — an outsider looking in — don’t know as much as I should about wrestling given my position as the proprietor of an Oklahoma State-related website. But that’s why we have Seth Duckworth.

Seth knows more about OSU and wrestling and OSU wrestling than I know about anything in my life so I hit him up this week after OSU signed the No. 1 class in the country to ask about the crown jewel of this class, AJ Ferreri, the No. 1 recruit in the country. I wanted to know what I needed to know as someone who — maybe like some of you — doesn’t follow wrestling as closely as the other sports.

Kyle Porter: As an outsider looking in, how big of a game-changer is Ferrari? How does he compare to Fix?

Seth Duckworth: It’s a massive one. The class as a whole is off the charts and nothing like OSU has been getting in previous years, but having the top guy as a part of that is huge. Also he has two brothers that are almost certain to come to OSU as well which could set up a bit of a long-term family dynasty.

Fix had a few more international credentials than Ferrari. A few more world medals and a Junior World Title, but part of that is Ferrari has been hurt and missed some time. He possibly would have done more if it weren’t for that. Ferrari has also had a nearly flawless folkstyle resume. All the big-name tournaments in the country he’s completely dominated. Fix had a few losses.

One other thing I’d note on Fix vs. Ferrari is Fix entered at a really stacked weight class. Some say 133 this season was the toughest college weight class ever. Ferrari’s likely weight of 197 just isn’t that right now and doesn’t look like it’ll be that in a few years. There are a few pretty elite prospects at around that size, but it’s just nothing like what Fix had at 133 this year.

KP: Give me a comp in another sport like FB or MBB.

SD: I’m not the most knowledgeable person on basketball, but all the excitement surrounding Cade Cunningham comes to mind. We still have to wait and see what happens with both, but he’s definitely that elite level of talent that could help change the game at OSU.

For football I’d say Rashaun Woods, simply because of the family aspect. Ferrari comes from a really big, really close Italian family, and it’s almost a certainty that both his younger brothers will eventually come to OSU as well. Both the younger brothers are big time. One is a sophomore and I believe at least top 10 in his class and the other is still in middle school, but also really talented as well.

KP: I’m fascinated by the family aspect. How much was that talked about between OSU coaches and their family during recruiting?

SD: I’m sure a ton. The Smith family is really the “first family” of wrestling. You can debate certain things in wrestling about coaching legacies and maybe discussions about John Smith’s international wrestling resume vs. Cael Sanderson’s college legacy and who did the most as an athlete, but in the debate of family legacies, it’s hard to find anything that stacks up to the Smiths.

John is the only American to win six world titles, his brother Pat was the first to win four college titles. Their kids and extended family have won multiple NCAA titles, you could really go on all day about it.

A kid like Ferrari growing up in a big Italian family just like John and assistant coach Zach Esposito, I’m sure connects to that. On recruiting trips and that sort of thing the Ferraris brought the whole family, and I really think Coach Smith just naturally gets that and connects to that because that’s exactly the type of family he came from.

Esposito and Chris Perry probably too. I’m sure in a lot of their interaction it wasn’t even a part of the recruiting pitch and was probably just more of a thing where they all understood each other and that family is a really big thing to all of them.

KP: Give me your personal top 5-6 recruits in OSU history. Like the five or six biggest studs coming in.

1. Jake Rosholt (probably the most comparable to Ferrari when you look at size and family legacy)
2. Daton Fix
3. Kenny Monday
4. Ferrari
5. Johnny Hendricks
6. Chance Marsteller (for any fans that don’t recognize this name I would look it up and understand that some elite recruits don’t pan out like you’d hope).