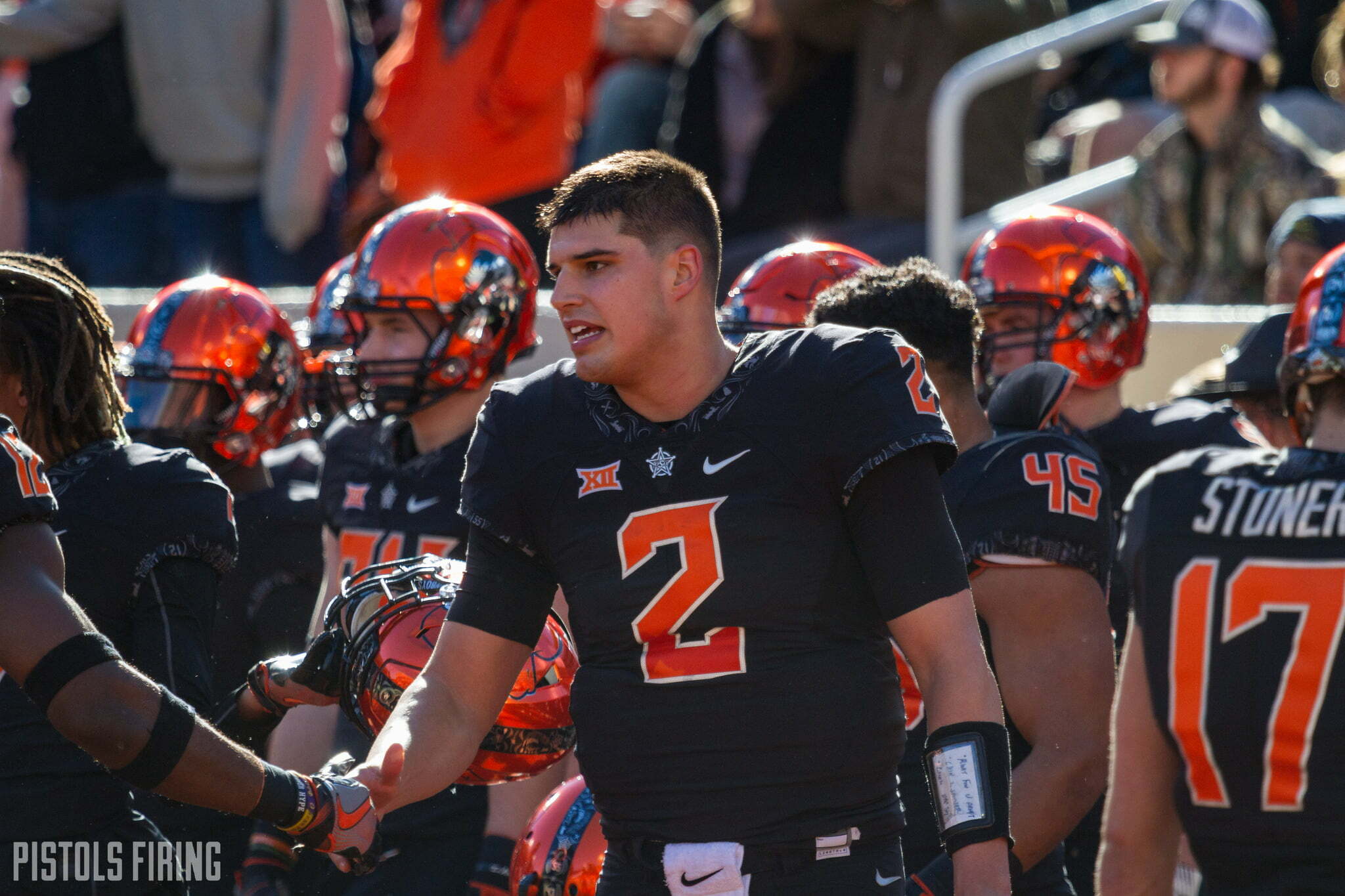 The NFL Draft is inching closer and closer with the next big milestone, the Scouting Combine already underway. Keep up with the action with our viewing guide for the event. Let’s start this week’s edition with a reminder of some important dates.

Oklahoma State has yet to officially announce the date of its Pro Day but Robert Allen of GoPokes is reporting it as Thursday, March 15.

Rudolph was in Frisco, Texas last week attending the Jason Witten Collegiate Man of the Year Award ceremony, where he was one of three finalists.

While he was in town, Drew Davison of the Star-Telegram caught up with the former OSU quarterback about his draft prep, his health and where he sees himself among this year’s talent-rich QB class.

“It’s gone great. I had a bit of a setback in my bowl game, had a mid-foot sprain [on my left foot], but I’m pretty much 100 percent now. I’m able to run, lift weights and throw obviously 100 percent. I’m looking forward to it [the Combine in Indianapolis]. Putting my best foot forward as far as the interviews go, medical, I think I’ll knock all of that out of the park.” Star-Telegram

While his four teammates are already in Indianapolis, Tre Flowers, the Cowboys’ only defender garnering in an invite, will get started on Friday with the rest of the draft-eligible defensive backs.

Scott Wright of The Oklahoman had a good piece on Flowers, his pre-draft workouts in Phoenix and how he’s approaching the combine.

“It’s been real different,” he said. “You just focus on preparing yourself for it. You try not to stress about it, but you know you want to do so good. I try to stay calm and stay patient, just work as hard as I can, like I always have.” NewsOK

NFL draft analyst Mike Mayock was asked about the New England Patriots and their need to draft a backup to Tom Brady, and Mason Rudolph came up at the top of his list.

“I think Mason Rudolph from Oklahoma State is a really logical player. Prototypical, dropback type of guy. I don’t think he has great escapability, but I think he can do what the Patriots offense asks him to do. Along with him, I would say Luke Falk and Mike White, I think, are very interesting players.” NBC Sports

Bleacher Report’s latest mock also has Rudolph headed to the Patriots, which hold the 31st pick and are in need of a backup QB after saying goodbye to Jimmy Garoppolo last season.

Being able to come up slowly behind a Hall of Famer is an ideal situation for Rudolph, and Bleacher Report brings up a good point about OSU’s all-time passer that we’ve talked about before.

Rudolph finished his college career with 13,618 passing yards, 92 passing touchdowns and 26 interceptions, and his numbers could have been even better if he wasn’t subbed out of red-zone snaps as a sophomore in 2015. Arm strength is a question with Rudolph, but Brady hasn’t built his career off his ability to throw a frozen rope 65 yards downfield, either. Bleacher Report

This looks to be one of the deepest QB classes in years heading into the draft and The Ringer posited a scenario where six signal-callers could hear their names called by Roger Goodell in Round 1.

The piece had Rudolph going sixth among his counterparts but 15th overall to the Arizona Cardinals.

…Rudolph doesn’t have the arm talent of many of his peers, but has ideal size (6-foot-5, 230), is an athletic runner on zone-read keepers, was excellent in the face of pressure in 2017, and finished the year with a quarterback rating of 112.2 on third downs, second among all passers in the nation per Pro Football Focus. It’s a risk to take Rudolph this high, but Cardinals GM Steve Keim has always been aggressive as a decision-maker—and this pick would give the team a player it could develop into a quarterback. The Ringer

In his latest mock draft, Will Brinson of CBS Sports has Rudolph going No. 27 to the New Orleans Saints.

It’s never too late to start thinking about tomorrow. Rudolph might be high here, but even Drew Brees knows his time isn’t going to last forever. It’s fun to make this projection, but it’s also easy to see them taking someone who can help them immediately and kicking the can down the road on the QB issue. CBS Sports

NJ.com, the website for New Jersey Local News that covers the New York Giants, had their own mock draft with a Poke headed to NOLA, but this time it was James Washington being selected by the Saints with their 27th pick.

The Saints’ defense finally made some strides last season, so the focus can turn back to the offense. New Orleans is going to stick with 39-year-old quarterback Drew Brees, so adding a big-play threat like Washington will keep the offense rolling. NJ.com

Here is a list of my top-10 WRs in the 2018 NFL Draft and one interesting stat regarding each player. https://t.co/T81OaGTiPs pic.twitter.com/jZDLR6qgFT

On what James Washington has to prove at the combine this week.

Racing past Big 12 corners became routine for Washington, who hauled in 33 touchdown passes in the last three seasons. But NFL teams will want to verify his deep speed, and his 40-yard dash time will be one of the combine’s most scrutinized. With a squat build and lack of experience running a full route tree, Washington could see his stock drop if he doesn’t measure up to to his peers. USA Today