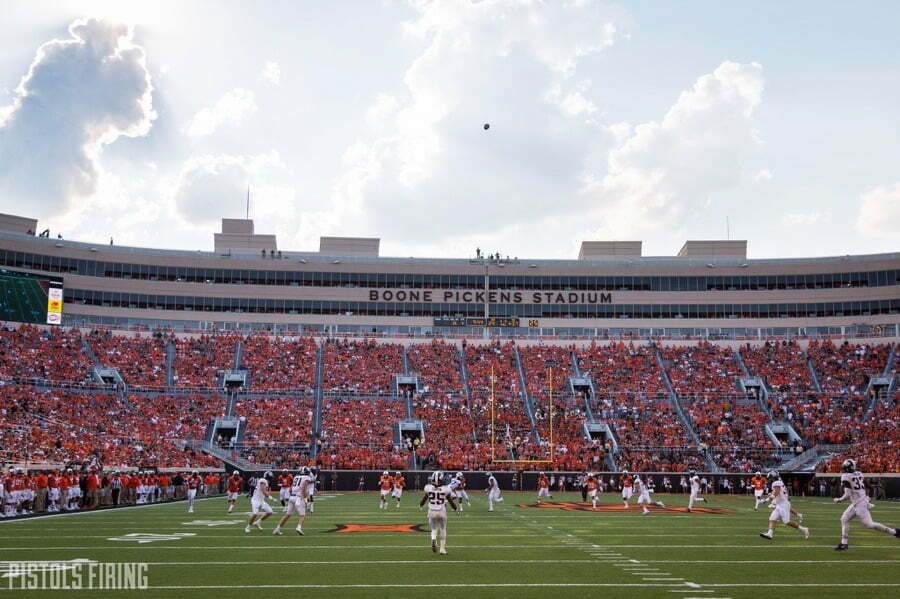 As we begin to look forward to our 2:30 p.m. homecoming tilt with Baylor, commenters on the site reflect on the Tech game and talk about expectations for the rest of the season.

Here are our top comments from the site this week:

We have looked different the past two games. Why? I suspect it is almost entirely due to the depth issues at OL. Back-to-back juggling of lineups with negligible preparation time (broken ankle in practice the day before the TCU game?!) has an impact.

Affects play-calling, and offensive execution, which in turn affects scoring margin and field position which influences defensive strategy (maybe not execution, but situation and strategy). I am cautiously optimistic that we are better than 2015 and 2016… but we have to get our OL reset and healthy. –Alum in AZ on OL depth.

The last two games haven’t been pretty, however, it is important to remember that this team isn’t fully healthy. The bye week should help OSU get healthy and work out some of the mistakes that have killed them the last two games.

Besides his first year, I’ve never understood the hate against Yurcich. Honestly guys, every OC makes some calls that aren’t perfect. Its pretty ridiculous that so many are against him. Seriously….just stop. And let’s not forget that Yurcich was instrumental in snagging Rudolph and also coaching him to where he is today. –oSuJones on Mike Yurcich

3. Spreading the Ball Around

Great receiver depth, but I kind of felt this going in to the season: there’s only so many receivers you can have producing on any given play. At the end of the day, you have 2 wideouts and a slot guy who can contribute. You can’t trot out our entire depth chart at wideout on every play and just drown the defense in all our “receiver greatness.” We have depth at the position yes. But that’s really all it is. Washington and Ateman are our main two guys. We can’t have a “main six.” –GoPokes on receiver depth.

I agree with all of this, although I do think OSU needs to find a way to get Tyron Johnson involved more.

Justice Hill kept em in it. That kid is tough as nails. For a guy of his size to mix it up with the big boys in the trenches for 30 carries is unbelievable. And he was the energizer bunny doing it. He never delayed a return to his feet and never looked hurt or tired, but he was getting punished inside. It’s insane to watch him do that with a stable of backs sitting on the sideline ready and capable of producing at least 10 carries per game. –Sonny on Justice Hill’s toughness.

Justice Hill is an incredible talent, that much is for sure. I would like to see J.D. King get a few more carries, at least in the first half, to help take some of the load off Justice.

I’m now convinced we should go for it if we’re inside the 10 and/or its an “& goal” situation. There’s no reason not to trust the offense and Amendola can’t be trusted on those plays. –Matt Belanger on red zone situations.

This is J.D. King and James Washington territory. There should be no reason for OSU to be kicking field goals inside of 20 yards.

We, as OSU fans, must rise up against this black and gray garbage. Bring on the orange and white, those are our colors!!! –Matt Cox on OSU’s jersey combo vs Texas Tech.

I love orange, but going with orange and white every game becomes redundant. Not that UT has bad uniforms, they’re a classic, but Texas wears the same two combos every game. It gets old. Recruits also love a team that switches up their jersey combos.

Ramon had an excellent game. It didn’t happen during the Tech game, but the times he’s been beaten were almost always due to him taking a gamble and going for the turnover instead of the tackle. I feel like the fan base treats Ramon the same way they do Yurcich – both had a lot of faults when they first started, but while both have grown into their roles and have become rather good at it, most people refuse to let them out of the box they have chosen to categorize them in. –Mark on criticism of Mike Yurcich and Ramon Richards.

This is the final part of a much larger comment. The whole comment was good, but this part was great. Again, Yurcich and Richards are far from perfect, but most of the harsh criticism of these two is unwarranted.

8. Narrative for the Season

I agree as well. The game as a whole looked a lot better than what fans are giving it credit for on these forums. I think the sting from the TCU loss is still hurting. If we had blown out TCU, or even beat them in a close one, the narrative of this Tech win would be totally different. Fact is, OSU marched up and down the field all night. They completely controlled the LOS on both sides of the ball. Some mistakes kept Tech in the game, but this game wasn’t nearly as close as the score indicated. –Mark on the narrative of the Tech game changing if OSU had beaten TCU.

This is a fair assessment. To me, this feels a lot like the Baylor game last year. The Pokes may have lost that game, but the improvement was obvious. Hopefully with the upcoming bye week to aid in fixing some red flags, the Cowboys will be able to reel off a long winning streak like last season, and maybe even run the table.

9. Pokes in the Polls

There’s a reason we keep dropping in the AP. When you lose, handily, at home, and then follow that up with a one-touchdown win over an unranked opponent (I thought it was a good win, others do not) there’s nowhere to go but down. What I think is funny though, is everyone across the nation was talking about how this team was a national dark horse and the most explosive team in the nation, we play one bad game and all the sudden the narrative is we may finish 3rd in the league if we get lucky. Funny how impressions change. Watch Washington state fall off the edge of the world when they lose their first game too. –OSU Student on OSU in the AP Polls

If OSU keeps winning they will rise in the polls. We will find out a lot about this team by the end of the month. The first CFP Poll will be released on October 31st, and the CFP Poll is the only one that ultimately matters. Fortunately the Pokes still have time to impress and fix some issues before the first rankings come out.

MY has never been nor will ever be the reason for the Pokes challenges in rising to an elite level program during his tenure. It has always been (including the Monk, Holgy, Fedora & Gundy stints as OC) and continues to be related to the defensive ineptitude. Relatively speaking, our D has never on par with our offensive capability. Even at our best in 2011, the D was maligned but had a few exceptional dudes who could make plays and get off the field.

Aside from 2014 with an overwhelming lack of talent on the O-line and at QB, MY has led the O to a level that every school in America would be impressed with including Nick Saban. So for the love of God and country let’s drop this nonsense and start writing articles like this about what this program really needs to advance: DEFENSE. –PPC on the Pokes’ issues on defense.

The OSU defense will never be elite because of the pace that the offense plays at, but the defense could be a lot better. There is no excuse for giving up multiple 3rd and long conversions every single game.