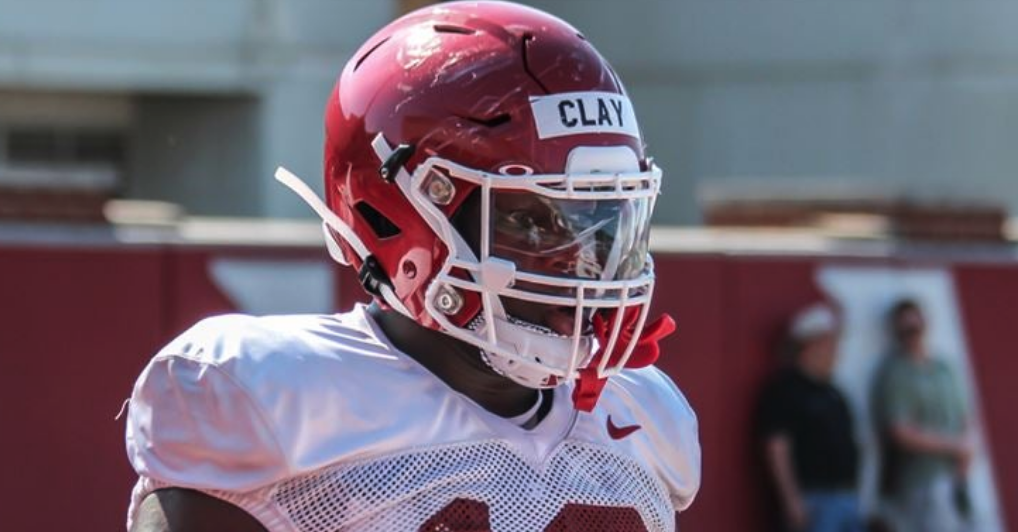 Next in the 2020 recruiting class film study series, I’m actually going to step away from the high school products and talk about two incoming transfers. First up is Oklahoma City native and former Arkansas Razorback Collin Clay. My three previous breakdowns in this series can be found at the links below.

Clay announced he would be transferring to Oklahoma State in late December.  Hailing from Putnam City High School, Clay was recruited heavily by OSU during his high school career, but ended up choosing to continue his playing career in Fayetteville. His decision to transfer stems from Arkansas firing head coach Chad Morris. Clay may have to sit out a year, but there seems to be some optimism that he will be granted eligibility by the NCAA to play in this upcoming season.

After not seeing any action in the season opener against Portland State, the young defensive end became a steady part of the D-line rotation throughout the remainder of the year. According to Arkansas Rivals’ site HawgBeat.com, Clay played in 15-plus snaps over that 11-game span, and averaged 32.5 snaps per contest. He recorded 17 tackles, including a half tackle for loss, and three QB hurries.

I was able to watch Arkansas’ games against LSU and Texas A&M from this past season. The clips used below will be from these two games, and Clay is wearing number 13.

Clay does a great job of stacking up his opponent off the snap and then using his hands to shed them and make the tackle in the run game. Below you’ll see an example of this against Texas A&M as he makes the tackle.

This was something Clay excelled in at the high school level, but this was often due to facing smaller offensive linemen. However, he has shown the strength in his hand punch and grip to move opponents out of the way in college.

While pass-rushing, Clay does a good job of extending his arms and exploding into the opposing blocker, as you’ll see below.

However, he lacks some of the technique that you would like to see from a defensive end. As I mentioned above, at the high school level he could bully people and bull rush through them, but in college he will need to incorporate swim moves, lifts, and chops to get by certain defenders.

This really stuck out in the LSU game where he was going up against elite offensive line talent. Although, this isn’t a major concern as this is something that can be taught, and I think Clay has the athleticism and work ethic to make these moves a part of his game.

You already have seen in the section above an example of Clay’s dominance in the run game. This was something he excelled at in the high school level, making a big leap from his junior to senior year, and he has continued to play well in college in this aspect of the game.  His capability as a run defender was one of the primary reasons he became a key part of the defensive line rotation for the Razorbacks as a true freshman.

In the following video, you’ll see him work down the line and make the tackle stopping the A&M running back for a short gain.

In addition, he’s not only great at the point of attack, but he also does a great job of staying home on misdirection and reads. An example of this is shown in the clip below.

On the other hand, the one negative I saw in terms of Clay’s run defense is that sometimes he was a little slow off the snap, which in turn caused him to be waiting for contact as opposed to initiating contact. He would lose leverage resulting in him getting moved out of the gap. The below video shows an example of this from the LSU game. Again though, this is a national championship offensive line, so I think that needs to be taken into account when evaluating this play.

In the hand technique section, I already spoke the lack of moves to get by his opponent in regards to rushing the passer. However, as I said before, I think this is something he can work to improve, as he did use some rip and swim moves at Putnam City. Since I’ve already covered that, I wanted to focus on his strengths as a pass rusher.

The Oklahoma native has a lot of speed off the edge. I stated earlier that sometimes he’s a little slow off the snap, but other times he gets a great burst and can speed by elite-level blockers. This is extremely impressive for someone standing 6-5, 285 pounds. In the following video, you’ll see him get by the LSU right tackle and force Heisman trophy winner Joe Burrow out of the pocket.

In the next clip, you’ll see him get by the A&M left tackle and force Aggie QB Kellen Mond into a poor throw.

Clay has shown the capability to rush off the edge and to rush from a more interior alignment on the defensive line. I personally don’t think he will ever be a high volume sack guy, but he can be a force in this area of the game and I think he will continue to improve on this in Stillwater.

Arkansas lined Clay up in a multitude of different ways on the defensive line. In the first image below, you’ll see him lined up at defensive end with his hand in the ground in a four-man front. 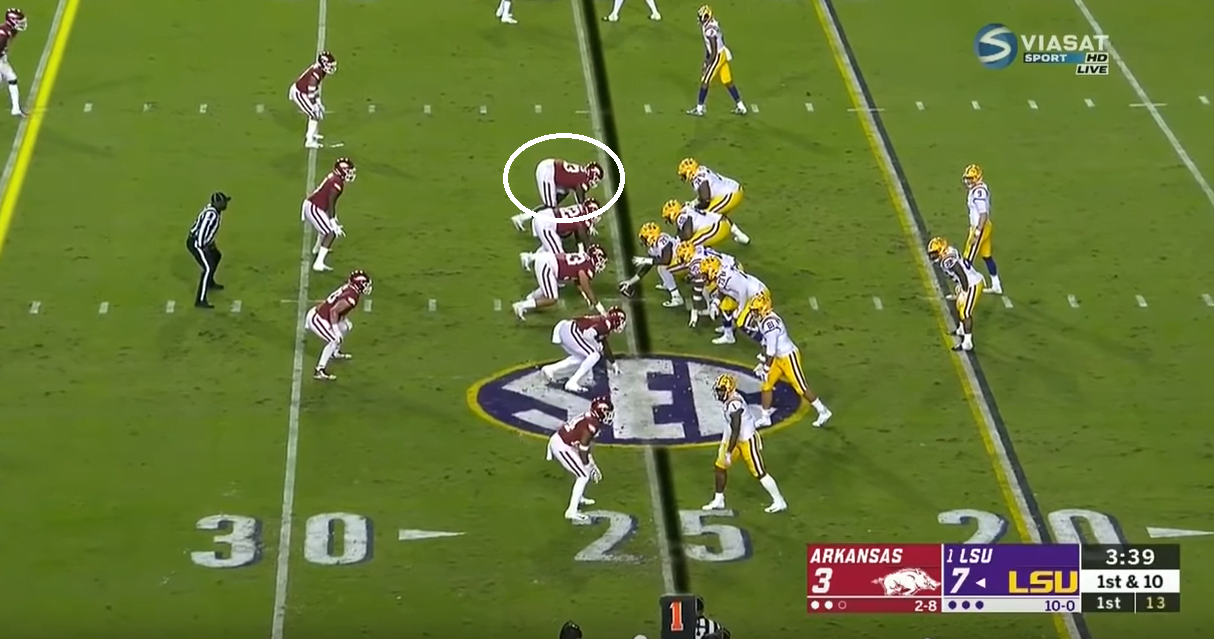 Next, Clay is lined up at end with his hand in the ground in a three-man front. 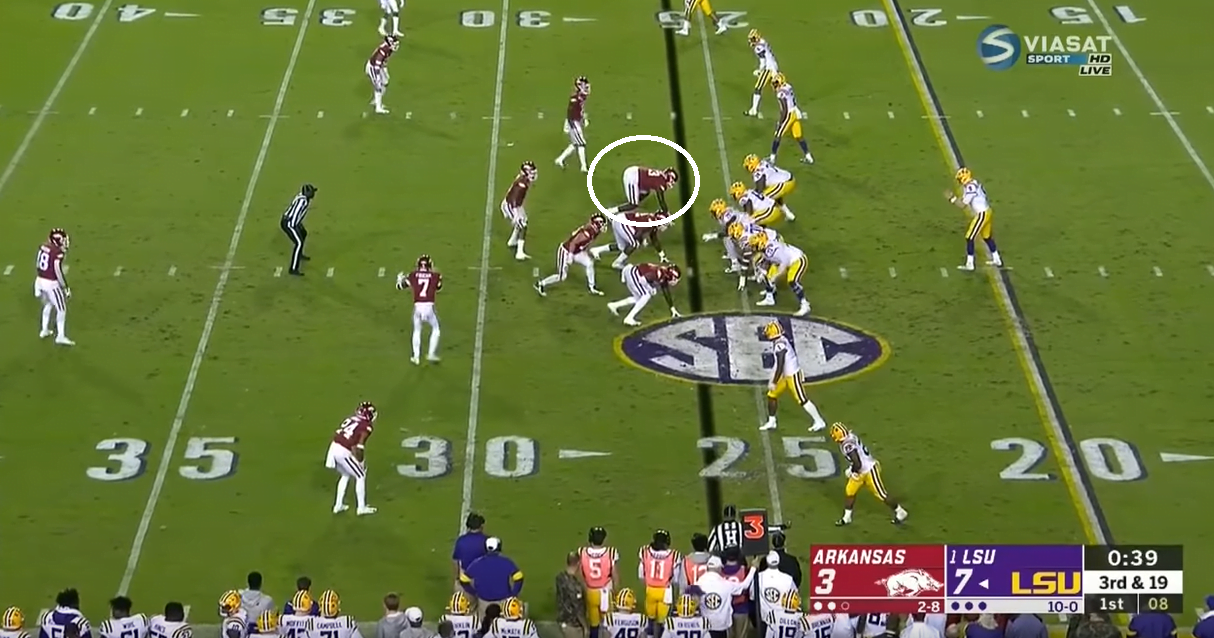 Then, in the same game, he is aligned as a stand up defensive end. 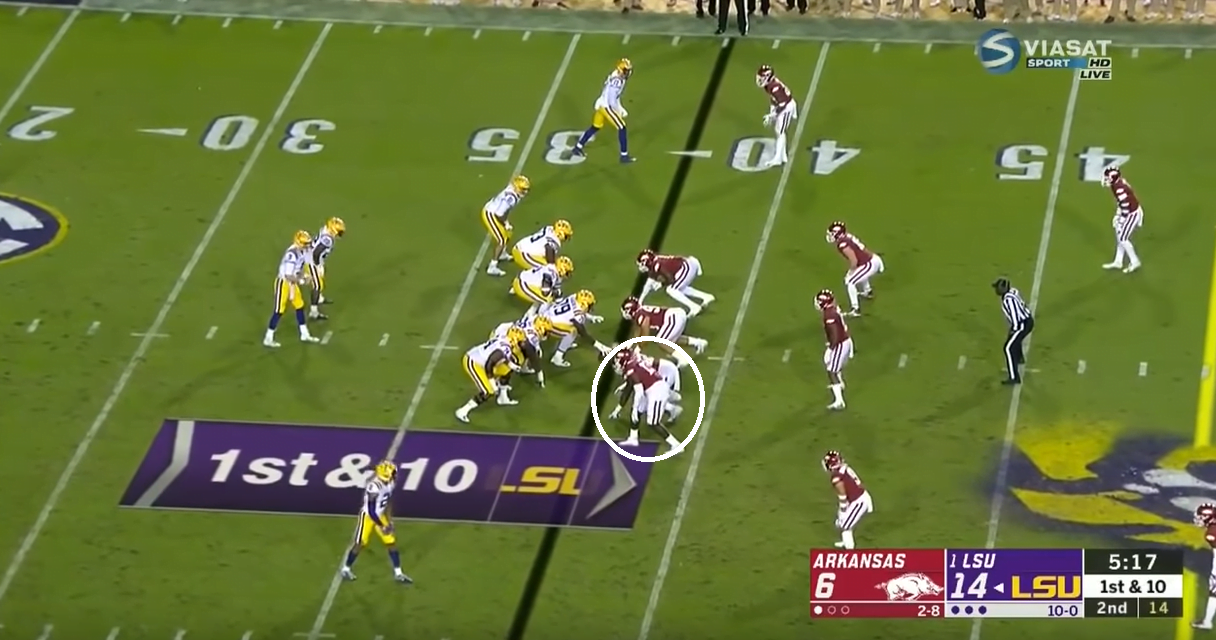 Clay also lined up in the Tite front against LSU. 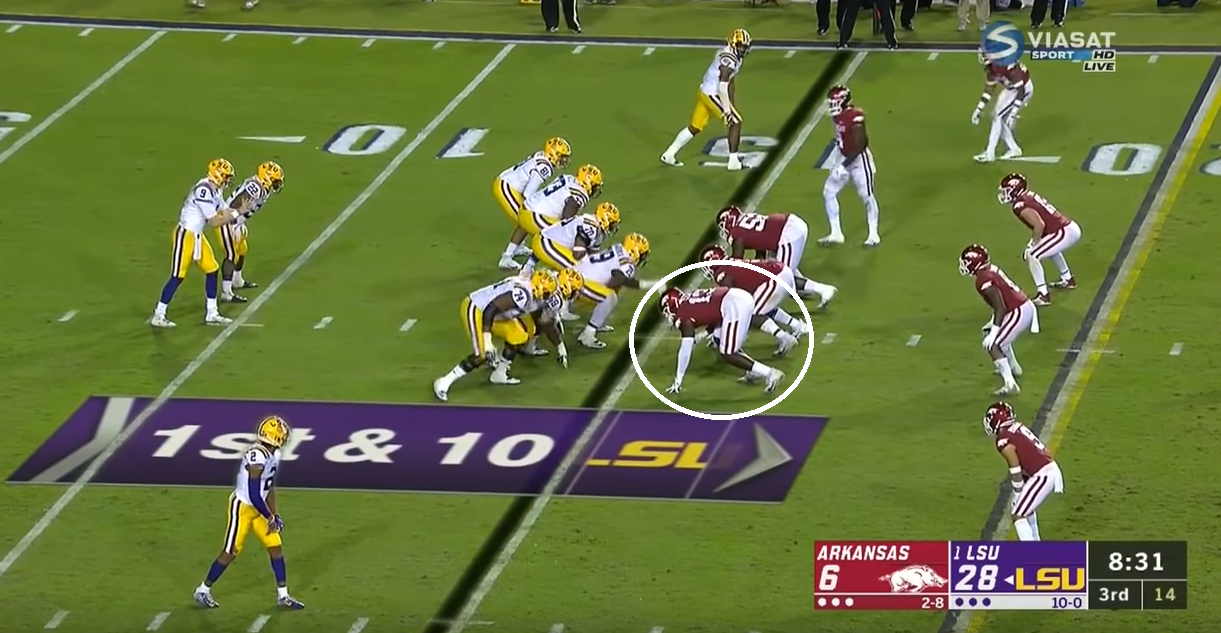 Finally, I wanted to show a clip against A&M where he dropped into coverage off the snap.

The Clay transfer is huge for the defensive line depth, even if he ends up being ineligible for next season, he will definitely make an impact down the road at OSU. There are still areas of improvement for the young d-lineman, but he has incredible overall talent and will be a defensive force in the Big 12.

I think he will mainly be utilized as a hand-in-the-ground defensive end in OSU’s three-man front, which we saw Jim Knowles’ defense base out of a season ago.