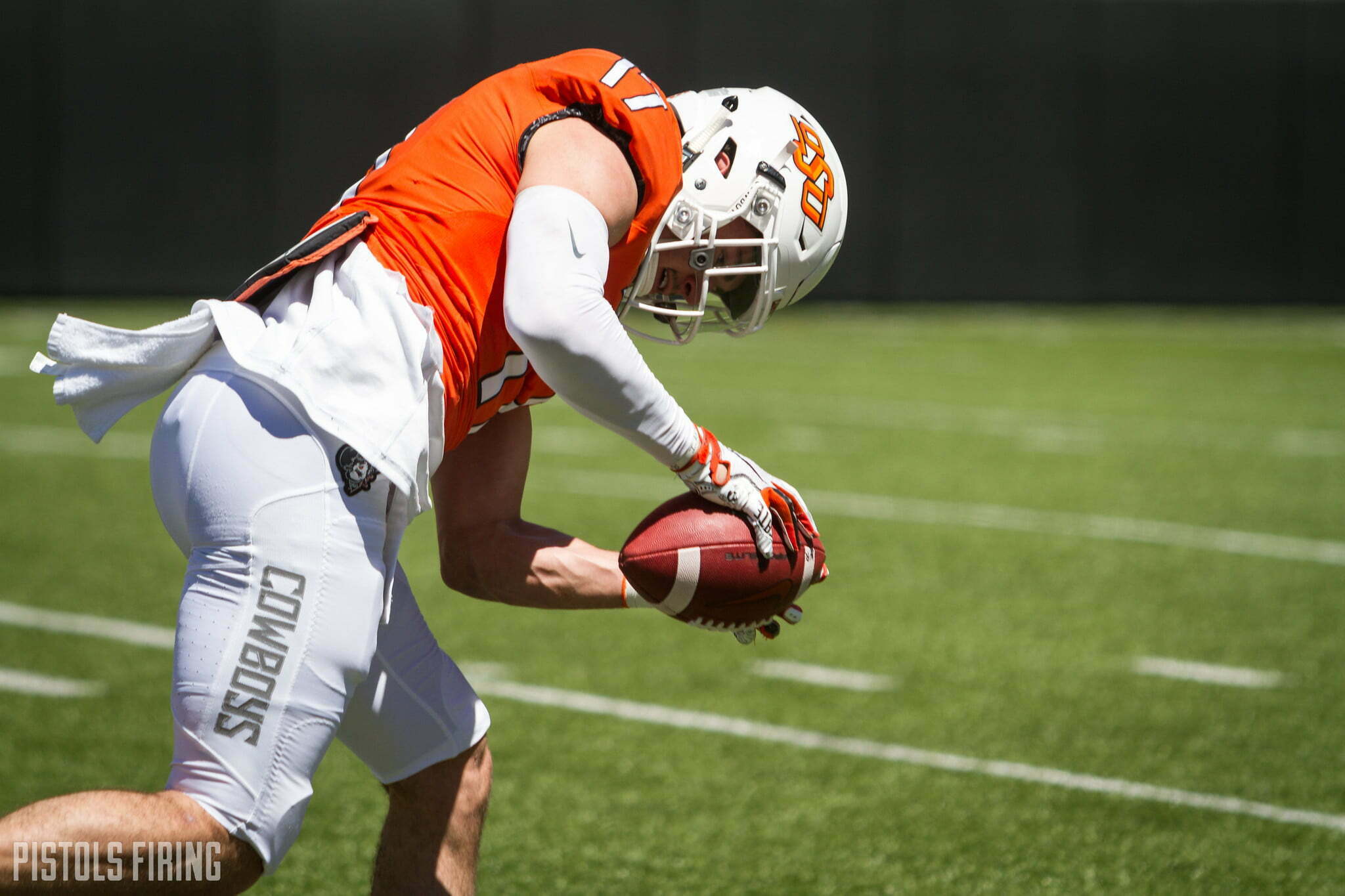 If you take one look down the roster, it might not seem like Oklahoma State has a wide receiver problem. With Biletnikoff finalist (and 2020 NFL Draft pick?) Tylan Wallace leading the charge, Dillon Stoner starting his 11th year of college football and C.J. Moss beginning his four-time Heisman career, it seems like everything is fine and dandy. But Mike Gundy feels a little bit differently.

So differently, in fact, that he might move an entrenched starter on the inside — Dillon Stoner — to the outside to fill the spot Tyron Johnson would have occupied had he not ejected for professional football with the Houston Texans.

In that case, Landon Wolf would fill the Stoner role, and you’d be going with heightened experience at the three primary WR positions.

“[Tyron] surprised us,” said Gundy recently. “We’d certainly like to have him back out there. We’re immature [on the outside]. We don’t have anybody who’s ever played a game there. Some maturity there would help.

“Whether we have to move Stoner outside at certain times, that’s been a discussion. When we get into the middle of August we have to make a decision and go with it. The good news with Stoner is he can play every position so if we needed to make a move we certainly could.”

The Ty Bros. (-lan and -ron) started all 26 games on the edges for last year’s Pokes so moving Stoner — who started seven games (all on the inside) — to the outside would be a deviation from the norm. But if not a Wolf-Stoner combo on the inside-outside then who else?

Candidates include Moore, who I think needs to be starting based on the 100 seconds of footage I’ve seen of him from a borderline intrasquad walk-through, along with Braydon Johnson (R-So.), Jonathan Shepherd (R-Fr.) and maybe even Langston Anderson (Fr.).

But there’s also another guy who got a lot of buzz in last year’s fall camp. Gundy addressed him after the spring cotillion.

“I hate when people put percentages on things, but [Patrick McKaufman] looks to me like he’s about 70 percent [healthy from his knee injury],” said Gundy. “He’ll take off and run and kind of forget about it. Then he remembers it and doesn’t run as hard. I would guess he’ll get a lot better by July in just the wear and tear. He’s still wearing the brace right now so it’s hard to forget about it. I think he’ll get better.”

McKaufman hurt his knee just before OSU lined up for the 2018 season. But there was a “Justice-in-his-freshman-year” level of buzz for No. 85. So if he can bounce back to 95 or 100 percent then maybe he provides the maturity OSU is looking for at that spot.

Regardless, it’s clear they’re still searching for something. Even though spots 1-2 are filled and 3-4 are kind of filled, the true pecking order has yet to shake out. And it’s not as if this doesn’t matter at all. In 2017, OSU’s fifth-leading receiver by yards was Tyron (who nearly won them Bedlam). Its sixth (!) was Chris Lacy. These are players who could have big moments in important games.

And as the Big 12 has revealed to us over the last decade, you can go as deep down the depth chart as you want offensively and pry numbers from all style of players, but if you come up short on playmakers you’re going to have some issues. When you throw in potential injury luck and a No. 1 guy (Tylan) that will be game-planned around, I’m not sure it’s possible for OSU to be too deep when it comes to the offensive side of the ball.