The time is finally here: playoff baseball has returned to Stillwater. I’ll tell you why each team might win, why they might lose, and give you my predictions for the winner and the MVP.

This is one of the best OSU teams in years, and it all starts with coach Josh Holliday. In two years, he has instilled a winning attitude and established the fundamentals with a great group of players. Holliday understands that winning games starts with getting runners on base, which the Cowboys are really good at. They are among the nation’s leaders in walks and on-base percentage, along with sacrifice bunts. This gets runners in scoring opportunities with a high percentage of capitalizing, which OSU does often.

The best combination the Cowboys have going for them is the “never say die” attitude and the incredible bullpen. The trio of Blake Battenfield, Vince Wheeland and Brendan McCurry can basically cut a game in half, allowing OSU to make yet another comeback – 27 so far this season. The Big 12 Champions know they have a target on their back, but also know how sweet it would be to return this historic program to Omaha.

This team seems to struggle when facing good pitching, and there will be plenty of that in the Stillwater Regional. OSU also shoots itself in the foot with leaving runners on base, a problem that hasn’t been solved all season. Throw in all the first inning troubles and it’s easy to imagine this team getting in a deep, early hole it can’t climb out. It’s a long way to the Regional final when you fall into the loser’s bracket – just look how the Big 12 Tournament played out.

Former MLB All-Star and current Huskers coach Darin Erstad has brought this team back into the national spotlight. His team plays much like he did in his 14 MLB seasons – hard-nosed and mistake-free. They are a well-rounded team who wins games in multiple ways, whether it’s lockdown pitching or some timely hitting. Like OSU, the Huskers were a few good innings away from being conference tournament champions, so they know what it will take to win their first Regional since 2005.

They have an ace in Chance Sinclair, but the rest of the pitching staff can be shaky at times. The Huskers average 5.9 runs per game, so usually they can out-hit whatever the pitchers have given up. But they will be up against one of the best hitting teams in OSU and one of the best pitching teams in Fullerton. Come tournament time, being great at a few things is usually better than being good at a lot of things.

Pitching. The Titans have the best team ERA in the nation, at just over two runs per game. They don’t give up walks either, which means opposing hitters have to earn their way on base. Also, this team is the most experienced of the four in the Stillwater Regional, having played in four Regionals and a Super Regional in the past four years. There won’t be any butterflies for this veteran group.

Hitting. Fullerton has been unimpressive at the plate this season, and it’s like the old adage says: You have to score runs to win the game. Of the four teams in the group, the Titans have the worst batting average, lowest on-base percentage and fewest home runs. Pitching can only take you so far before you need the sticks to show up, and too often that doesn’t happen for Fullerton.

This team knows how to rally when the season is on the line. In the America East Tournament, Binghamton dropped the first game to fall into the loser’s bracket, but rattled off four straight wins to claim the title and an NCAA Tournament berth. Center fielder Bill Bereszniewicz will have to be the spark, getting on base and stealing his way to scoring position. If he steps up and the pitching can hold teams in check, Binghamton could score one of the biggest upsets of the season.

The Bearcats are simply overmatched in this Regional. They will face better pitching and more powerful hitters than they’ve seen all year. Maybe in a weaker group, they would have a shot. But Binghamton drew three powerhouse programs that are all looking to return to Omaha, and it will be too much for the Bearcats to overcome. 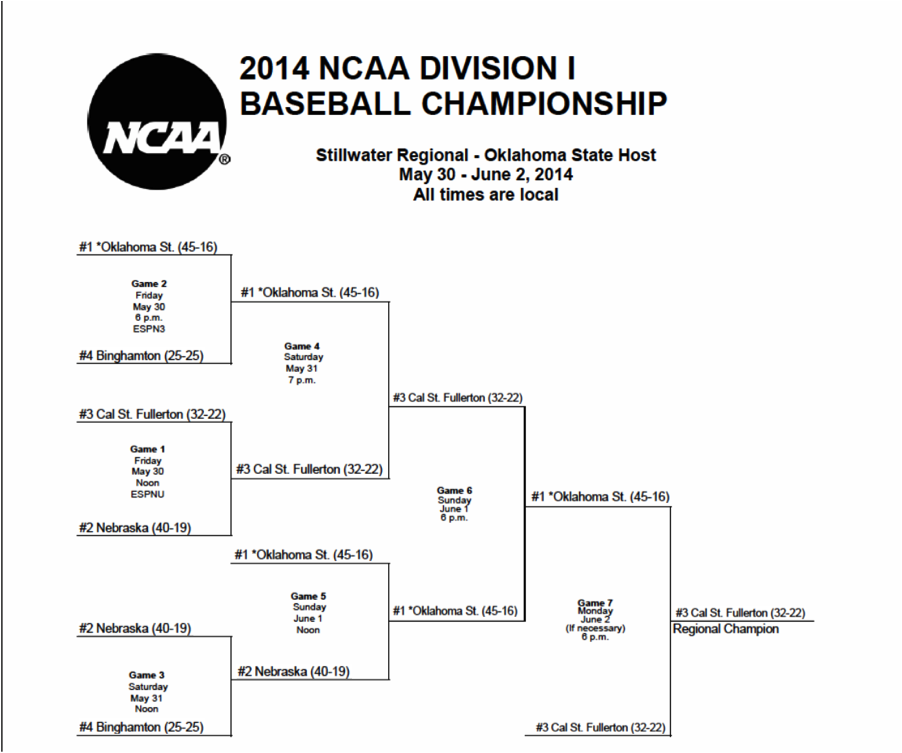 This is a better Cowboy squad than last year, but this is also a harder Regional than last year. OSU got the bad end of the draw, and it will be too much to overcome.

Binghamton will play its two games and then enjoy the Stillwater scenery, as there is too much talent in this group for the overmatched Bearcats. Nebraska will hang around a day longer, but won’t get through the Fullerton pitching or Cowboy hitting.

That will set up a rematch between OSU and the Titans, and I don’t think the Cowboys go down without a fight. Expect the “if-necessary” game to be played, but ultimately Fullerton will get a few timely hits and its pitchers will shut down the Cowboys, who struggle against good pitching. Fullerton will go on to its first Super Regional since 2010, leaving the Cowboys at home preparing to come back stronger next year.

If the Cowboys are going to win this Regional, it’s going to be won at the plate. Expect Big 12 POY (and just-named All-American) Zach Fish to have a big weekend if he’s recovered from the ankle sprain that cost him the last half of the Big 12 Tournament. If not, Tanner Krietemeier and Conor Costello, who combined for 16 home runs and 64 RBIs, will be asked to step up to replace Fish.

Fullerton is going to win on the strength of its pitching, so look for starters Thomas Eshelman or Grahamm Wiest to take home MVP honors. If the Titans can shut down OSU’s offense, whoever is on the mound is going to deserve that award.

If the Huskers are going to steal this Regional, it’s going to be on the arm of starter Chance Sinclair and the bat of second baseman Pat Kelly. This is the most well-rounded team of the four, so it’s only fitting that it will require both sides of the ball to advance to the Super Regional.