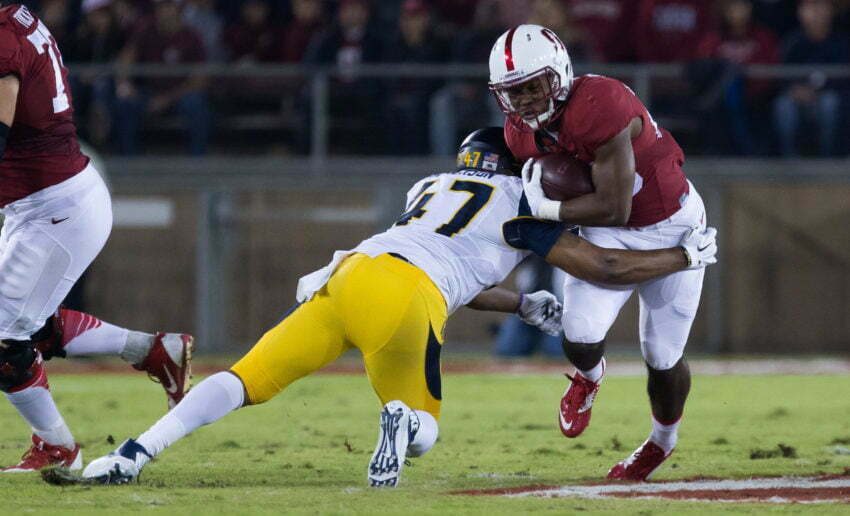 Barry J. Sanders comes to Oklahoma State as both a talented and vetted running back, and many expect him to do big things in orange in black. Sanders, who comes to OSU as a graduate transfer, has one year to make a difference for the Pokes. Whether he will start at running back is unknown, although unlikely. He will, though, probably be used as a rotation back and a specialist. Sanders has the experience and ability to contribute in a number of ways for the Cowboys. Here’s an analysis of what he could do in the run game, the passing game and as a return specialist.

Sanders’ career statistics stand out a bit when in comparison to those of the Cowboys’ backs. Keep in mind that Sanders played for a team that is consistently one of the country’s greatest running football teams, while OSU, well, is not.

Sanders comes in as the leading back in rush average at almost 6 yards per carry. He didn’t get very much playing time at Stanford, yet still finished both his sophomore and junior season with over 300 yards. Compare this to OSU’s Rennie Childs, who had 72 and 78 rushing attempts in 2015 and 2014, respectively, but didn’t reach 300 yards in either of those seasons. Carson surpassed Sanders’ run total in 2015 with over 500, but averaged only 3.9 YPC. Barry will have to fight for touches in a backfield that will reportedly feature a total of five running backs — Carson, Childs, Barry J., Jeff Carr freshman Justice Hill. Carson, Childs and Barry will probably get the bulk of the carries, although there are reports that Hill will play a bigger role than initially expected.

Whether Barry J. will contribute in the passing game is unknown. Sanders only accrued 12 receptions and 89 yards in his three years with the Cardinal. Compare this to Carson, who had 17 receptions for 170 yards in 2015. Sanders will have receptions by the end of the season, but most of them will probably be off of simple swing or check down passes. Sophomore Jeff Carr was used in a similar role last season, so the Cowboy coaching staff could create packages for either Carr or Sanders.

One area in which Sanders could make a difference is the return game. Sanders hardly got any time at Stanford, only returning nine punts and two kick returns in his entire collegiate career. For the Cowboys, the kick return specialists varied, including Jeff Carr and occasionally Brandon Shepherd or James Washington. Jalen McCleskey returned punts most of the time, and while he did well, he had the occasional problem of muffing the punt. Sanders was just announced as the kick returner and second-team punt returner on the week 1 depth chart. Sanders has the ability to make a difference in every week, even if it’s predominately on special teams.

In conclusion, remember that it would be unfair to compare Barry J. to the production of his father considering that Barry Sanders was one of the best, if not the best, college running backs of all time. Still, there’s undoubtedly going to be the crowd who expects Barry J. to light it up the moment he steps on the field. Whatever happens, it is important that we all appreciate Barry J. for his own talents and contributions in whichever role he finds himself.