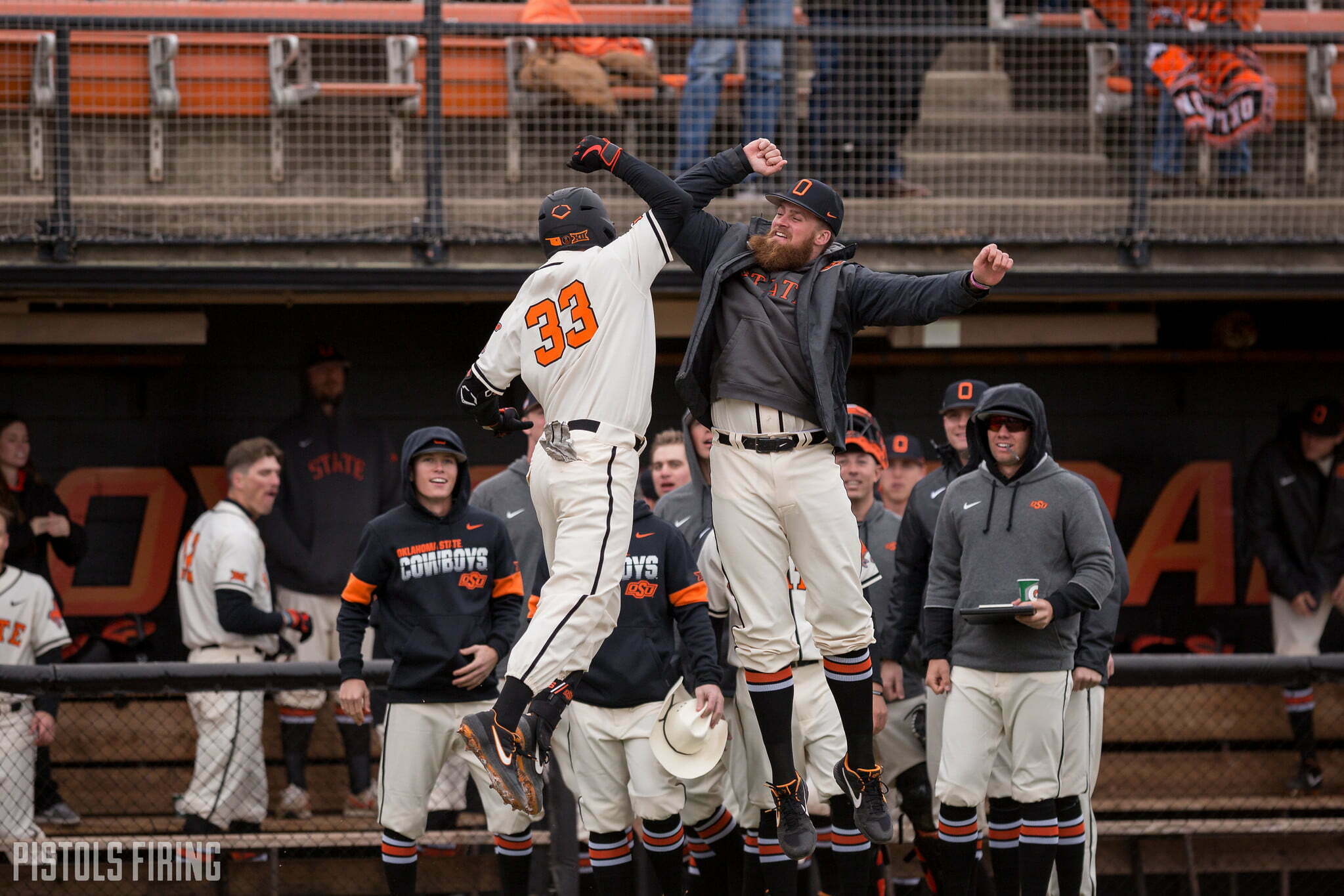 STILLWATER — Brock Mathis and Kaden Polcovich are new to the Cowboy baseball team this season, but their transition has been seamless.

Mathis, who played at LSU last season, hit two home runs in his six innings played. He finished 3-for-4 with three runs scored and five RBIs. His first home run didn’t look like a round-tripper off the bat.

Mathis looped a ball to left-center. Cade Cabbiness was on second, and he began to tag up waiting for the Saint Louis outfielders to run under it. The two tracked the foul ball back and back, but the wind eventually carried it over the fence.

“I didn’t think it was going out,” Mathis said. “I’m running and once I touched first, I’m looking at the centerfielder. He was stopped, and I’m like, ‘You gotta be kidding me.’ The ball must’ve just grew two jets on it. It just took off.”

Mathis’ second home run would’ve been gone without the wind, as he crushed the ball high off the netting protecting the softball stadium. Soon after he made contact, Mathis took a few slow steps up the first-base line and tossed his bat end over end.

“Hitting a home run is just the best feeling in the game,” Mathis said. “When you do that, there’s nothing better. Maybe for me seeing a big buck in the woods is probably my second-favorite thing ever, but there’s nothing that beats a home run.”

Polcovich came to Stillwater from Northwest Florida State, but he played his high school ball at Deer Creek in Edmond. He came up with the bases loaded in the sixth after Caeden Trenkle was hit with a pitch in the head the batter before. Polcovich blistered a ball over the right-field fence as a response. The grand slam was Polcovich’s second home run of the year.

Trenkle was fine after a walk to first base with the trainer.

Polcovich ended the day 3-for-5 at the plate with two runs scored and seven RBIs. He was a single away from the cycle.

“You try not to think about those things,” Polcovich said. “You kinda just let them happen. We’ll get it next time.”

The Cowboys used freshmen arms Wyatt Cheney, Kale Davis and Colton Bowman. The trio of newcomers combined to pitch six innings where they gave up four runs on eight hits.

Sophomores Nate Peterson and John Kelly threw the final three, giving up a combined two hits while striking out seven.

It was also a solid game for Cabbiness, OSU’s senior right fielder. Cabbiness entered the day hitting .213, lowest among OSU’s starters, but he went 4-for-6 with three runs scored and four RBI.

The Billikens have a lot to figure out and a short time to do so, as the teams play again at 4 p.m. Wednesday.