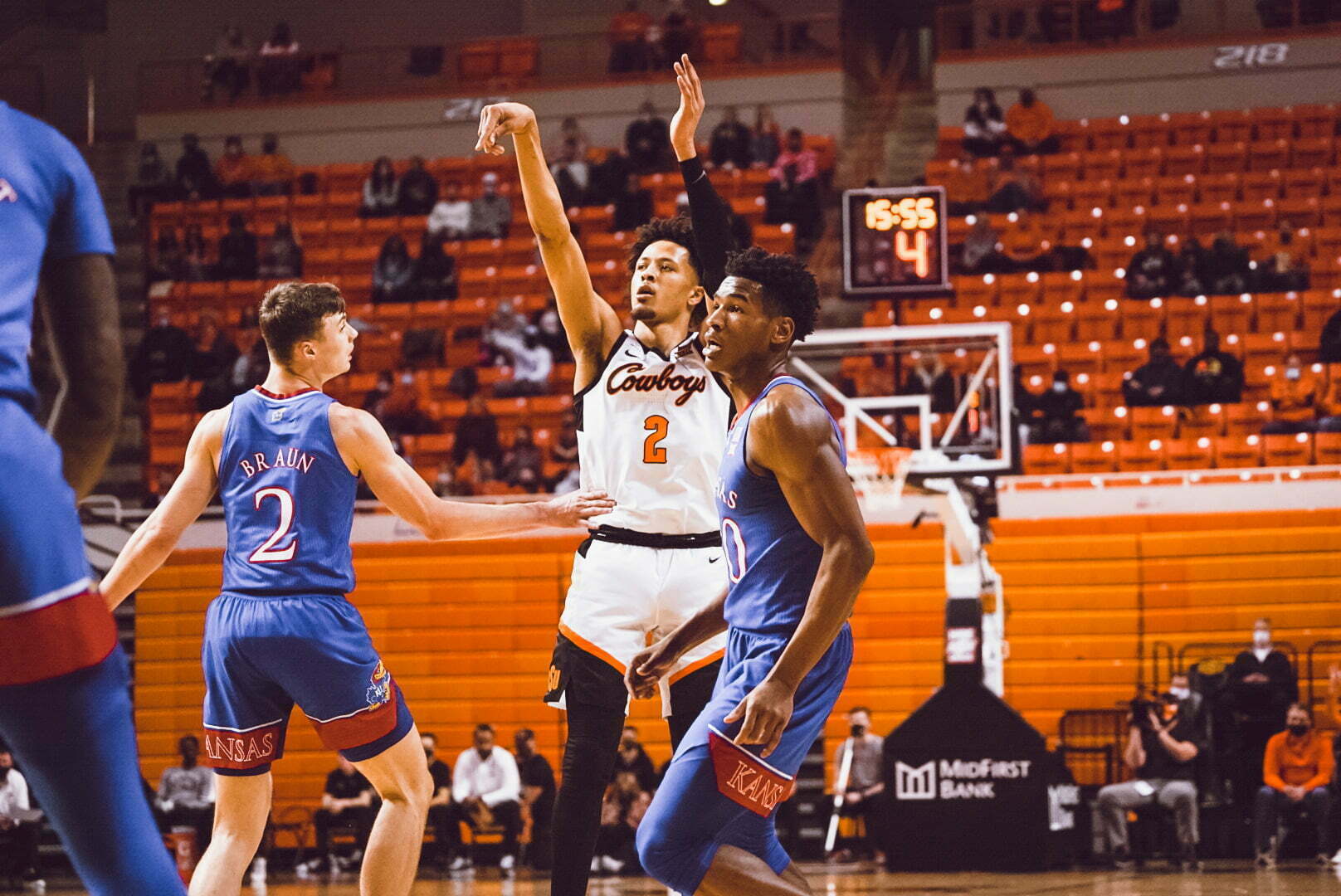 The Cowboys blew another big lead, but the Cowboys looked willing to die to not lose in spite of it.

Oklahoma State beat Kansas 75-70 on Tuesday night in Gallagher-Iba Arena, but that win came after the Pokes lost a 16-point lead.

The Jayhawks went on a 21-2 run in the second half an took their first lead of since midway through the first half with 3:08 to play.

The Jayhawks led 70-67 with 1:20 to go. The Cowboys hadn’t scored in more than five minutes when, of all things, Isaac Likekele hit a 3-pointer to tie the game.

The Cowboys then gave up life and limb to make sure what happened against TCU and West Virginia didn’t happen again. A few mad scrambles with bodies sliding all over Eddie Sutton Court saw the Pokes regain the lead, as Cade Cunningham turned on slow motion and saved a ball from going out of bounds that quickly ended in a Rondel Walker and-one. It gave OSU a 73-70 lead.

Walker hit the deck again in KU’s next possession where he was able to get a steal on the ground and call a timeout with fewer than 20 seconds to play.

KU fouled Bryce Williams who missed the front end of a one-and-one. Ochai Agbaji, who made four 3s in the game, got up two 3-point attempts but missed both. The second rebound went off a pair of Cowboys, giving the Jayhawks one more shot with 4.2 to play. But, as he did against Texas Tech, Bryce Williams sealed the game with a steal off the inbounds pass which he turned into a self-oop and a slam.

Cunningham torched the Jayhawks in the first half in a game that probably had a lot of NBA eyes on it. Cunningham dropped 14 first-half points on only seven shots. He hit three 3-pointers and had five rebounds and three assists.

Cunningham had a lot of highlights, but perhaps his best first-half clip was this half-court, left-handed bounce pass that set up an Avery Anderson and-one.

OSU put together a 10-0 run in the first half and lead by as many as 16 in the frame. The Cowboys took a 46-35 lead into the break thanks to Cunningham, Anderson and Williams all scoring in double figures.

Walker was a bucket away from a double-double, as he finished with eight points and a career-high 10 rebounds.

The Cowboys have a week of emotion-filled games, as OSU hosts Bedlam rival Oklahoma at 7 p.m. Saturday on ESPN2. The Sooners slammed TCU 82-46 on Tuesday.