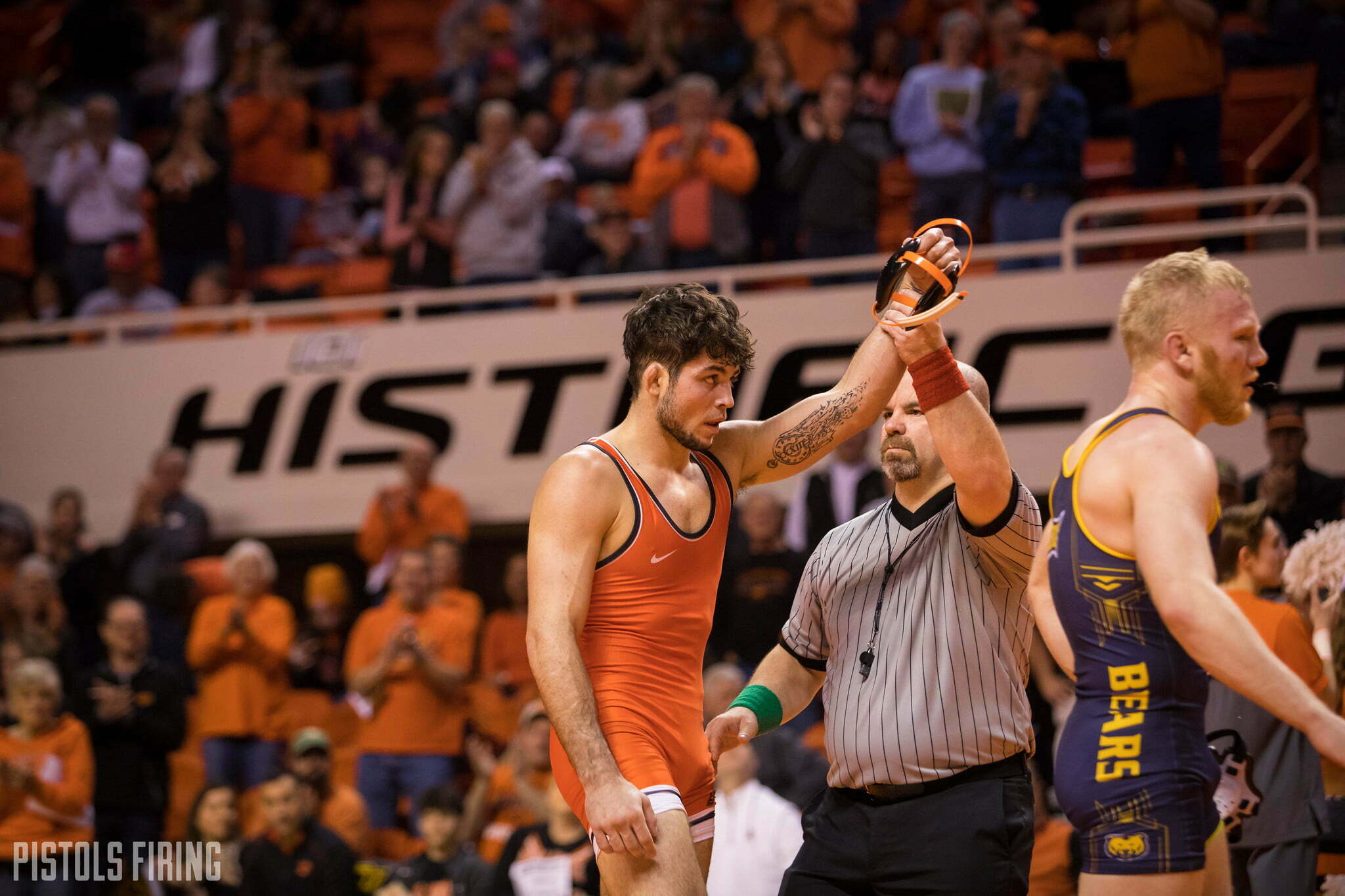 STILLWATER — Instead of taking it easy on what’s become a national holiday, the Cowboys had a Top-25 dual on Super Bowl Sunday.

Oklahoma State beat Missouri 26-6 in Gallagher-Iba Arena. It dropped the No. 24 Tigers to 10-6 on the year, but Missouri hasn’t dropped a dual in the ACC. Meanwhile No. 11 OSU advanced to 10-2 this season.

Oklahoma State football player Brock Martin weighed in for the first time since recently joining the wrestling team, but he didn’t take to the mat.

Up 23-6 heading into the heavyweight bout, Cornelius Putnam got the nod. Martin was introduced for the first time as a Cowboy wrestler before the dual during match introductions, and the Cowboys’ defensive end got a nice ovation.

Brock Martin gets quite the cheer during introductions. pic.twitter.com/wSQDNkMZSa

Putnam won his first match of the season, beating Jacob Bohlken in tiebreakers. Putnam and Austin Harris have shared heavyweight duties to this point in the year. They have a combined record of 5-10. Although Martin didn’t get called into action Sunday, OSU coach John Smith hasn’t ruled it out heading into the Big 12 Tournament.

“Well, I’m gonna keep my options open,” Smith said. “He’s pretty good, but he’s not ready physically. Physically, he’s not ready. You want to protect him a little bit. This time in the season, if you get tired in a match 90 percent of the time that’s when you get injured.

“I’m not ready to use him, but if he keeps clawing along that is an option toward the end. As we go into the Big 12, more than likely, we have no shot at getting a heavyweight to nationals other than somebody that takes a spot. Somebody’s gonna have to take a spot. If we have three or four Big 12 guys have automatic spots for the conference then I want to put the best guy we can put in to maybe take a spot and make a trip to nationals.”

Main Event: No. 1 Boo Lewallen vs. No. 5 Brock Mauller

Boo Lewallen successfully defended his No. 1 ranking Friday night, but he couldn’t do it again Sunday.

Lewallen dropped his bout to No. 5 Brock Mauller 5-3 in sudden victory after Lewallen took a 3-0 lead into the third period. Mauller escaped in the third before landing a takedown to tie the bout at 3. Then early in the overtime period, Mauller landed a double-leg on Lewallen for the win.

“3-0, man,” Smith said. “3-0, end of the second period going into the third you’re up 3-0. In my house? Nobody beats me. He got beat. Sat on the back of his heals and got beat. But again, I’ll say this: he hasn’t been in enough battle matches in the last couple years. That was a battle match that he needed to go finish off your match. You need to go score one more time, take him completely out of it or score more in the second. But it didn’t happen that way.

“I’ll tell you another thing that I’m going to remind him is we don’t ever get double-legged in overtime. We break down. We get our hips ready to go. He got posted and double-legged and there was no real opportunity to even scramble.”

Match of the Dual: Wyatt Sheets vs. No. 11 Jarrett Jacques

Just moments after seeing his teammate get upset, unranked Wyatt Sheets took the mat against No. 11 Jarrett Jacques defending a 2-point team lead.

Sheets took Jacques to a tiebreaker where he won with a somewhat anticlimactic takedown after his escape. It seemed Jacques ran out of gas.

“He just flat out gave up. It’s good to have that happen, though. It’s kind of what you want to do to an opponent.”

The Cowboys hit the road next weekend with duals against Air Force and Wyoming.