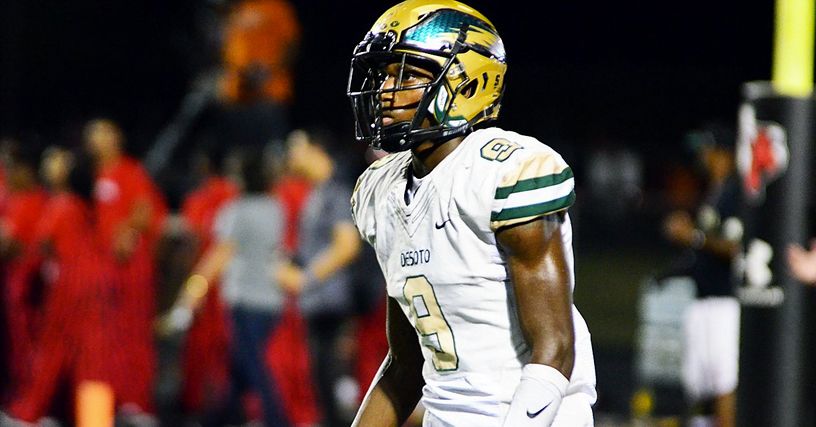 Among the many sporting events taking place in Stillwater on Saturday was an important recruiting event that takes place under Mike Gundy’s watch. Generally close to 100 recruits make their way from all over the state and surrounding area to visit the facility, meet with coaches, and of course go to the basketball game. It’s an official visit of sorts, minus the fact that OSU pays for it.

Coaches generally take this time to hand out scholarship offers to some of their targets on the board, and Saturday was no exception. Here’s who Oklahoma State offered, along with a list of visiting prospects.

You’ll never believe it, but Union produced another Division I talent in Kelley. Shocker, right? The offer to the junior defensive tackle/defensive end is his second. Tulsa offered earlier in 2016. Now Oklahoma State.

Listed at 6-foot-3 240, Kelley is one of the most disruptive defensive lineman I’ve seen in person. He’s a bully in the middle and with his combination of size and agility, he reminds me a little of Vincent Taylor. Just an athletic freak for a player of his size.

Mike Gundy loves him some dual-threat quarterbacks who have versatility to play other positions. That’s Williams’ profile in a nutshell. With his experience playing at the quarterback position as a supreme runner and passer, he’s a playmaker that can be slotted at any position. So he’s an athlete Oklahoma State is willing to take a chance on, extending an offer during his visit.

Rated as a three-star recruit at 5-foot-10 188 pounds, I’d like to think this offer may be as a defensive back/athlete. But the reality is that he could play on both sides of the ball with his versatility.

Offer No. 1 is in for Fort Worth (Texas) Eastern Hills outside linebacker Byron Hobbs, and OSU is first in line.

6-foot-4, 205 pounds? From Fort Worth? And still hasn’t garnered interest elsewhere? I’m betting that changes. So I like this offer.

Being from Allen — one of the most dominant high school football programs in Texas — he’s not been a well-kept secret. Baylor, Mississippi State and TCU have all joined the list since the year began, and Texas, Ole Miss and Houston also have standing offers to the offensive tackle.

Another first offer out the door on Saturday. This one to unranked inside linebacker prospect Blake Barron of Rockwall, Texas.

Oklahoma State is now pursuing both inside linebackers from Rockwall. The OSU staff offered 2018 linebacker Alston Orji, a four-star recruit, earlier in 2016. Barron is an underrated backer, though, and at 6-foot-1 218 pounds I think he has good size at the inside backer position.

Nic McTear picked up his first Division I offer with OSU’s on Saturday.

From Frisco, Texas, McTear will likely be a steal as an unranked recruit right now. He has good size for a tight end, he has very good leaping ability, and he’s a solid blocker — and important characteristic OSU needs for its cowboy back position.

Another Frisco native with an offer on junior day: rising offensive lineman Rafiti Ghirmai. A three-star offensive tackle, Ghirmai already has 12 Division I offers and counting — 9 since Jan. 1.

As everyone knows, offensive tackle is a position of high importance for OSU. And even if it gets solidified this season, it’s always smart to look to the future. Ghirmai would be a nice one to pick up down the road and can take care of QB Spencer Sanders blindside.

For yet another cycle, Oklahoma State is seeking the commitment of a DeSoto wide receiver. Three-star Byron Hanspard is the latest:

Another DeSoto product, Gemon Green has been offered by Oklahoma State as a defensive back. The latest defensive back from DeSoto to pick OSU was A.J. Green in 2016.

With 8 offers already, OSU is getting in on the ground floor. Green has legit size for a defensive back — a trait OSU loves. And he’s a lanky athlete that can evolve into a lockdown defender.

ALERT. We have another brother target. German, the brother of Gemon, happens to be twins with him. German is an inch taller than Gemon.