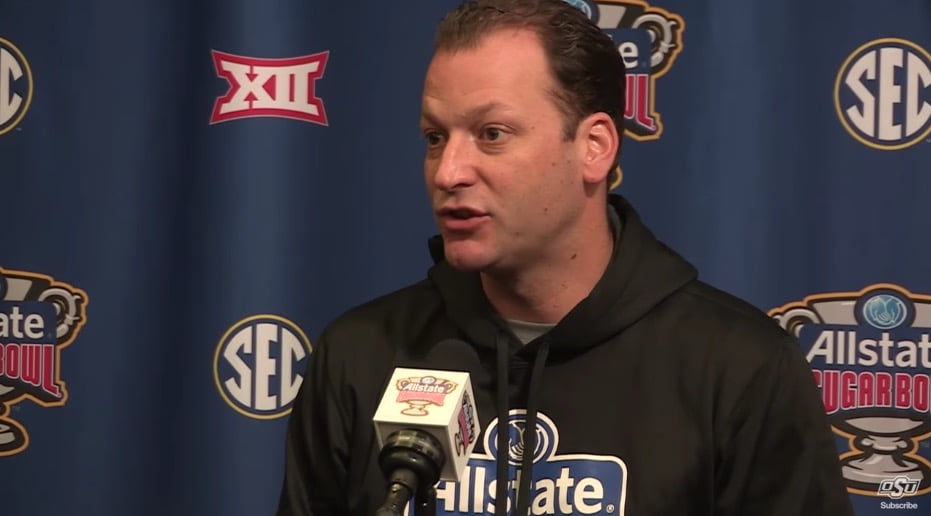 According to a report from The Franchise Sports’ Lauren Rew, Oklahoma State offensive coordinator Mike Yurcich is interviewing for the same position at Auburn.

According to my co-host @Lauren_Rew, a source tells her that #OKState OC Mike Yurcich is interviewing at Auburn.

In four years at Oklahoma State after being imported from Shippensburg, Yurcich has been at the helm of one of the most explosive offenses in the country that averaged more than 450 yards per game. Specifically, he’s been successful in developing and recruiting quarterbacks at a high level — an area Auburn could use some help with.

The job could be attractive for Yurcich for several reasons. Playing in the SEC for a program like Auburn would almost guarantee a pay raise, and he would be walking into a situation inheriting former Baylor quarterback Jarrett Stidham, a five-star prospect almost certain to make a big impact as a junior college transfer. Also, Yurcich has coached in a two-back spread at OSU for four years now. Auburn runs that same offense.

Acording to SEC Country, Yurcich will have total autonomy should he get the gig.

Whoever replaces Lashlee is expected to have total control over the system and the play-calling. Head coach Gus Malzahn used to call the offensive plays before giving up that control earlier this season.

As for Oklahoma State, running backs coach Marcus Arroyo could be a good fit to be promoted to play-calling duties, should he be interested. The former San Jose State quarterback spent time as an offensive coordinator at Wyoming as well as at Southern Miss under Todd Monken before taking a job as a quarterbacks coach for the Tampa Bay Buccaneers.